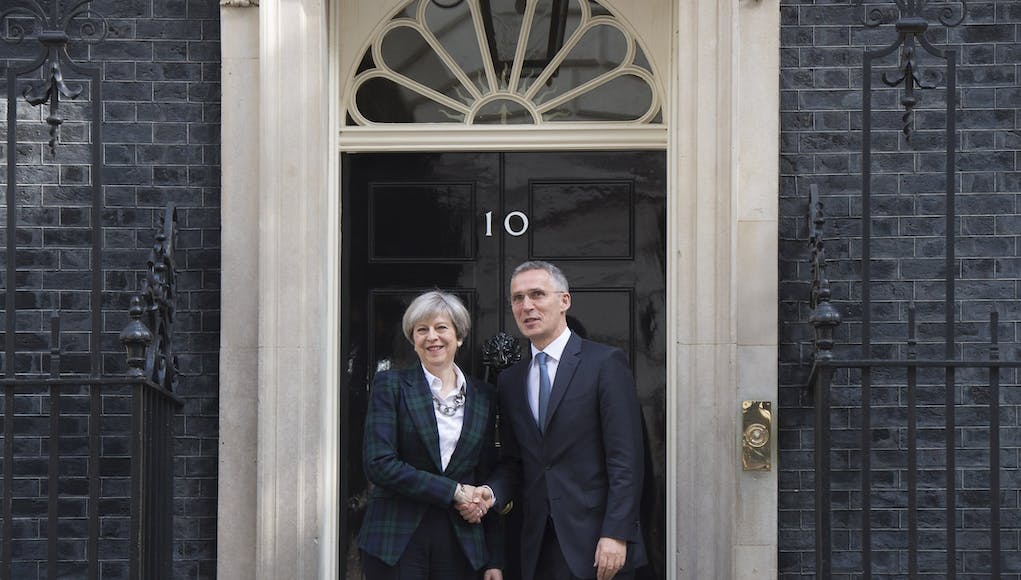 The Secretary General thanked the United Kingdom for its enduring commitment to NATO and its leadership in Europe and beyond.

NATO Secretary General Jens Stoltenberg met with Prime Minister Theresa May at 10 Downing Street on Wednesday to discuss preparations for the upcoming meeting of Allied leaders on 25 May.

In their talks, the Secretary General and Prime Minister May underlined the importance of fairer burden sharing and NATO’s role in the fight against terrorism. Mr. Stoltenberg noted that both issues will be high on the agenda for the meeting of NATO leaders and thanked the UK for leading by example on both fronts.

The UK government claims it spends 2% of GDP on defence, however earlier in the year, the International Institute for Strategic Studies claimed that British defence spending was 1.98% of GDP in 2016, below the 2% target set out by NATO. This was denied by the government at the time.In 2006, NATO allies set a target to spend 2% of Gross Domestic Product on defence. The UK oftens meets this target but when reporting its defence expenditure to NATO, the UK now includes several items of expenditure which had not previously been included.

Nonetheless, the UK remained the only European state in the world’s top five spenders in 2016.

If all Nato European countries were in 2016 to have met this 2 per cent of GDP target, their defence spending would have needed to rise by over 40 per cent.”

A press release cited British contributions to the alliance:

“British troops are leading a NATO battlegroup in Estonia, Royal Air Force jets patrol the skies over the Black Sea region and the UK leads NATO’s Spearhead Force this year. British troops also continue to play a leading role in NATO’s mission to train, assist and advise Afghan forces as they secure their country.”

The Secretary General and Prime Minister May discussed what more NATO can do in the fight against terrorism.

The Alliance is supporting the effort against Islamic State with AWACS surveillance planes and training for Iraqi forces, with strong UK support.

Mr. Stoltenberg also reportedly noted that strengthening local forces is essential in fighting terrorism, and NATO has untapped potential to do even more. He noted that NATO’s military authorities have requested a few thousand more troops for Afghanistan, and that decisions will be taken in the coming weeks.

our military requires a commitment to 2.5% of GDP as a minimum and not 2%.

Additionally we should commit dedicated portions to capital expenditure (new equipment) 0.7%, Resources (1%) and maintenance and facilities (0.8%).

We need to get this on a proper footing and invest in British industry and British service personnel.

Where would it come from though, what other sectors of GDP would be cut? Even getting rid of the aid budget won’t cover that increase.

Sorry I thought the figures in your second paragraph were on top of 2.5%.

I do agree the aid budget should be cut and the money saved should be going to the Royal Navy. But not enough for 2.5%. I think 2% is enough if it’s spent correctly.

That plan you did on a thread a while back about procurement was excellent and that’s within budget.

K. I’ve costed the full MOD budget that includes better facilities, more equipment, welfare and a lot more personnel and a new fully funded Cyber force and it can all be done for 2.5% of GDP easily. Having reviewed many of the documents on spending for the MOD I am of the conclusion we are not spending anywhere near what is stated on defence or that the govt is totally incompetent. In many of the governments own budgets the foreign aid piece is actually under defence spending, further clouding the issue. Intelligence services come out of the Home and Foreign… Read more »

I bet old school Labour politicians are beating their heads against a brick wall. They actually committed to a proper 2% GDP this morning (ex pensions and accounting tricks) Then Corbyn fails to invite his Defence Spokeswoman to his defence launch, still ducks the big Q and promises a defence review after the election.

Annoyingly, that is going to take away any real opposition during election to get Tories to match a genuine 2% spending commitment because Corbyn’s Trident policy will be all the distraction needed to get away with it again.

Trident won’t go Ian, we live in a democracy and one thing Corbyn always champions is debates and a free vote. The vote to renew trident will always pass through parliament, it did last time when Corbyn was against it.

Doesn’t matter Kieran, almost no one thinks he will use it so it’s the same thing. He is not going to go against his lifelong and deeply held principles. I can respect that but he needs to come clean and let people make an honest choice.

It’s a fair point but you’re asking a man to potentially alienate nearly the entire electorate over something the chances of happening during the next 5 year parliament are next to zero. He’s not as stupid as the Mail and Sun make out so he won’t do that.

We have to remember Trident is a deterrent, if anyone has to retaliate then it’s completely failed it’s sole purpose.

It’s a fair point but you’re asking a man to potentially alienate nearly the entire electorate over something the chances of happening during the next 5 year parliament are next to zero. He’s not as stupid as the Mail and Sun make out so he won’t do that.

We have to remember Trident is a deterrent, if anyone has to retaliate then it’s completely failed it’s sole purpose.