Anson, the fifth of seven Astute class attack submarines being built for the Royal Navy, has been launched at the BAE Systems yard in Barrow-in-Furness, Cumbria.

The 7,400-tonne nuclear-powered submarine, officially named at a ceremony in December, emerged from the Devonshire Dock Hall and entered the water for the first time earlier today.

Anson will now begin the next phase of its test and commissioning programme, before leaving Barrow for sea trials with the Royal Navy next year, say BAE.

“The launch marks an important milestone in the Astute programme and seeing Anson enter the water at such an advanced state is a tangible demonstration of everyone’s hard work over the years. Designing and building nuclear-powered submarines is a national endeavour and days like this bring a huge sense of pride for our workforce, our partners in the submarine enterprise and our UK supply chain, not to mention our communities. We now look forward to a successful test and commissioning phase and working alongside Anson’s crew to prepare the submarine for operations with the Royal Navy.”

The Astute class boats are the largest and most advanced attack submarines ever built for the Royal Navy. Measuring 97 metres in length, the boats can circumnavigate the globe submerged, producing their own oxygen and drinking water.

The first four submarines in the class, HMS Astute, HMS Ambush, HMS Artful and HMS Audacious, have been handed over to the Royal Navy, with a further two boats currently under construction at our Barrow site.

She looks the business, god bless all who sail in her.

Agree with you.. Immense power

In the words of the great Jim Bowen “RAN. Lets have a look at what you could’ve won…”

Interested to know how many Astute boats Australia could have purchased for the cost of the conventional powered Barracuda Attack Class programme?Probably an unfair question.

Good luck HMS Anson and all who sail in her. She certainly is a fat lady (in a good way)…

Some would say -“is there a bad way?”

Question for those in the know: why doesn’t the UK arm its attack submarines with anti-ship missiles? The likes of France and Russia do as far as I know.

they do – the best anti ship missile in the world, Spearfish.

there is no reason for anything else if you have this, also Tomahawk has the ability to target large vessels as well

in all cases you would only use an SSN for strategic targets.

Why is the Spearfish better than other navies’ heavyweight torpedoes?
So the RN’s Tomahawks already have an anti-ship capability, ie without having to be upgraded to the newest version?

The Spearfish is one of the fastest Torpedoes in the world. I think the only one faster is the Russian one but that has the major disadvantage of using cavitation which means it immediately give up the position of the firing sub. Spearfish also has state of the art targeting technology. It is fantastic.

That being the case, why has it never been exported? Politics?

Various reasons. One of which is that it is so good we want to be careful who we export it too. Also countries that have their own subs are quite few and far between and most of those will have their own arms industries they want to support. Torpedo’s are hardly a mass market item… Just for comparison. The US mark 48 Torpedo which is their equivalent to the Spearfish has a top speed of 55 Knots. Spearfish has a top speed of 80 Knots. The Spearfish is currently undergoing a modernisation program to upgrade all of its systems. They… Read more »

No they dont, they would have to be upgraded first. Not sure if its even under consideration by the Navy either.

I’ll try to answer your question. Yes the French do carry a sub launched anti ship missile, the sub-exocet SM-39 this however has a range of 50km. Also when the missile comes to the surface it will give away the postion of the sub. The RN Spearfish heavy torp has a range of 50+km a speed of 80 knots and the sub does not give away its postion. The next issue is that 20 years ago there was the sub harpoon, however with the fall of the Berlin wall and the collapse of the Soviet Navy there was no real… Read more »

Thanks for your answer.

Surely when firing Tomahawk a sub gives away it’s position, too? Or does the fact that it can fire them at large distances from the target give it time to escape any detection? What is the usual mix of Spearfish and Tomahawk? 50/50?

Last edited 5 months ago by Stand Off Rocket Man
Reply

The mix would be at least 2/3 or more Spearfish, depending on the mission.
The Tomahawk can be launched from about 1500 miles away.

Agree… using a more covert attack is very much more survivable. I should imagine that the Astute follow-on will have VLS.

It is great to see new boats entering the fleet. It would be good to see an increase in SSN numbers to match the increase in escort numbers. With a deliberant resurgent Russia and the growing power of China more boats should be a prudent RN/MoD ambition.

Not physically possible, as much as we all wish otherwise. Barrow needs to finish the last few A boats and then move on sharpish to Dreadnought, which has already started build even though she’s a decade away from service. Basically, there’s no physical way for the UK to grow the SSN fleet for maybe 15 years. What could theoretically be done is build a class of conventional submarines at a different site. It would probably take a good 7-10 years to produce anything, but it give the submarine force a huge boost; a licence-built design would yield 2-4 boats for… Read more »

Hi folks hope all are well.
Great to see, another great sub, world class at the top table of marine engineering and advanced technology. Once more demonstrating to the world the UK is at the cutting edge of sea warfare.
Shame we are not able to have a further five or more.
Cheers
George

Hi George……. just finished Hunter Killers by Iain Ballantine ……we used to have submarines coming out of our ears……a really good read ….
Thanks Ian

Shame indeed. I wonder if the MoD has learned anything in recent decades? I believe a follow on SSN design is under way; will it really be ready to seamlessly take its place when the final Astute class goes out the door? We must learn from the debacle of shutting down our programmes and then having to re-learn the skills and re-train personnel – these short sighted decisions always mean greater expenditure in the medium to long term. They had a slight excuse with the dazzle of the ‘peace dividend’ nonsense, but none now. Stop start costs much more than… Read more »

Off topic, but still about subs. Indonesia has lost contact with one of its subs during a live fire torpedo exercise 60m off the coast of Bali.
https://www.navalnews.com/naval-news/2021/04/indonesian-navy-submarine-kri-nanggala-reported-missing/

Are British subs 100% British by design? I mean are they designed completely by Brits in Britain? And how much of the actual materials, electronics, propulsion system etc is British?

Going off topic a little, but i’ve never felt happy that we use a shared pool of Trident missiles. I would much rather we were truly independent of the US in regard to our nuclear deterrent. I’m sure some may disagree.

Today subs use materials from all over the friendly world, except for export restrictions due to national security concerns. Only the US, UK, and France, and a lesser extent Israel in the west restrict some items, but only for some navies. Scuttlebutt has it that the new Taiwanese submarines are getting supplies from much of the western world, in addition to the US.
The UK decided to buy the US ULBM while France developed it own, albeit with a good bit of US/UK technology.

We can launch them independently. That is all that matters ultimately!

Maybe so, but the US could cut off access to the missiles at any point if it so wished. Not saying that’s a likely scenario, but it is possible. Surely it can’t be that hard to make a missile of our own, after all we’ve done it before haven’t we?

Going WAY off subject, but i’ve also never felt happy having the US military permanently stationed on UK soil. I know the US is our ally, but it just feels wrong.

They could, apart from the ones we have rotated here so even that would not stop things short term.

The US is stationed in dozens and dozen of countries around the world.
Does not bother me in the slightest and as far as local economies go the locals are probably quite happy. ( Sacoollas incident excepted I would imagine )

What about the several locations in the UK where the US and UK military are co located in tri service units? Happy in that case, with the vital NS roles they do?

I have nothing against our personnel cooperating and training together, and i’m sure the US brings a lot to the game, but for me it’s a sovereignty thing.

The Sacoollas incident leaves a sour taste for sure. Really not good for relations, and shes needs to be brought to justice.

Do all four have 16 missiles at all times, ie 64 in total? Or are there just missiles on the actual at sea boat?

Course not. Especially as one will be in refit!
Also worth remembering that Trident is actually loaded in the UK at the covered Jetty at Coulport, where the active warheads are.

It is covered so satellites cannot see for sure what is loaded onto our submarines.

I presumed that was the case. Theoretically then we could just have 16 missiles (or even less). I would like to think we have at least enough to fully load two boats though.

How many we have UK based, I do not know.

The boats alongside in Faslane as well as the boat on patrol will all have UPTO 16 missiles onboard, with more stored in Coulport- no I don’t know how many either.
As @DM above has said the refit boat will be empty.

I don’t believe the US could cut off access to Trident arbitrarily; that’s in the treaty. Sure the UK could spend a lot of money for it own SLMB, then you’d need a facility to store the missiles, and load them into the submarines.. That would increase costs substantially. The way it is now the US has some excess capacity to handle British boats. Routine maintenance and provisioning is done at Kings Bay.

Yeah, but treaties mean nothing when push comes to shove. Do you honestly think the likes of Russia are upholding their end of the bargain regarding treaties? The US is our ally of course, but treaties are paper thin in the end. Maybe i’m just too pessimistic lol I’m not a trusting person…

So what about UK personnel stationed in the USof A?
There are a surprisingly big contingent of all 3 services in various locations with some embedded directly with US manufacturers. The largest group is at the Dam Neck facility in VA working on IUSS.( Son of SOSUS)

My comments are it is good to see a naval boat built by the skills and expertise of these workers.Not only this it is not relying on other countries to buy from , and uphold the tradition of this project.
May she sail the seas with God watching over her, embarking on her missions in the world and all who will crew her.
British skills carried on long may it continue 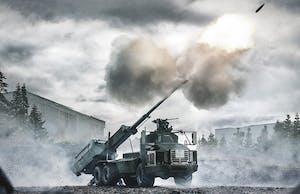