HMS Cutlass, the first of two new high-speed patrol boats, has been commissioned into the Gibraltar Fast Patrol Squadron during a ceremony at HMNB Gibraltar.

“Built by Merseyside-based Marine Specialised Technology, the patrol craft are twice as fast as Dasher and Pursuer with a top speed of 40 knots. Both craft have modern optical and infra-red systems, enabling users to identify and track potential threats at range and the craft are also equipped with three machine-guns. The updated systems help the crew in operations, maintenance and response to any unforeseen incidents.”

“For more than hundreds of years there has been a British Armed Forces presence in Gibraltar. HMS Cutlass and Dagger will provide security in British Territorial Waters and provide protection to visiting warships, submarines and support vessels.

DE&S are extremely proud to work in partnership with MST to provide the Royal Navy Gibraltar Squadron with a modern, fast and effective capability for fulfilling their important role.” 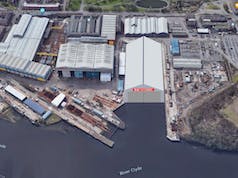 Soon we will see these tiny boats chasing down much larger Spanish ships. Ok it doesn’t need a bigger boat for countering Spanish games, since they are just making a point and no intention of doing anything, it does look kinda embarrassing when you see the photos.

I’m more embarrassed for the Spanish. Harassing NATO ships and subs in Gibraltar waters and playing games with patrol boats. It doesn’t matter what we have to greet them, nothing will happen. Also it isn’t just the Spanish they deal with its any encroachment so they need speed first and foremost. Having heavily armed patrol boats wouldn’t change a thing.

Exactly. Regardless what Spain do with their ships Gib remains British and the all important strategic assets on it.

I assume these have a handful of GPMG so that is fine for their role including CT.

They have mounts for 3 GPMGs and can take a 50 cal if needed.

Yeah no argument there, just looks stupif everytime you see photos in the news. Practically it’s the right decision but doesn’t change the optics.

The Big Man
Reply to  RobW

Because in the small space of Gib’s harbour you want two 3,000t ships playing silly buggers?

Yeah yeah not suggesting we waste the few ships we have, dealing with this, just annoying the Spanish act like they do. Maybe everytime they come into gib waters, we should send a ship into the waters of one of the Spanish islands and see how they like it.

If it wasnt for people being involved, no question we should give gib to the Spain, it’s clearly part of Spain, but when there are people involved it’s less easy. The will of the people should always come first

Or maybe Alaska should go back to Russia since it’s clearly not contiguous with the lower 48 states?

I would agree with you Dern. Similar issue for Northern Ireland. It’s part of the UK and those thinking we should give it to Eire are making a similar mistake. Of course if those people in Northern Ireland want to be part of Eire that’s up to them but until they do we should treat them like we do any other part of the UK e.g. London, Manchester, Birmingham, Wales, Scotland etc.

Does the RN need to fear the new Spanish submarine?
Construction started in 1999 and delays due to a wrong decimal point doubled the cost and as it wouldn’t float had to be enlarged so much so that it wouldn’t fit into Cartagena ( its-home port)
Now completed it is Reported Spanish workforce are applying for jobs with a certain Scottish ferry building company.

Who will start the moans that it lacks Mk41 and at least CIWS…? ﻿🙄﻿

Already had one! Some people wouldn’t be happy with anything less than Hypersonic missiles and a fully functioning dragonfire.

Where is the flight deck??

Just a small point. The picture shows the boat FFAW (fitted for AND with) armaments!! She must the most heavily armed asset we have…
AA

Cloaking device and maybe at a stretch Photon torpedoes

Add a zero to that Geoffrey!

When I posted this it was in response to your armament joke. Apparently It had to be approved! On the real note I’m sticking with my 75 minimum.﻿😉﻿

😀 We’ll get close to that, hopefully more.

OK, I will. Needs 15, no 18-inch guns too. Those pesky Spanish frigates need to be stopped.

Something Different
Reply to  Daniele Mandelli

Daniele Mandelli
Reply to  Something Different

It’s not an arsenal ship capable of sinking an entire US CVBG by itself.
Clearly useless.

Love posting this image when this subject comes up 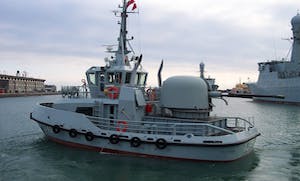 Should have kept Warspite for Gibraltar. Just the sight of the turrets turning would send the Spaniards running home crying for mummy…

Some of these so called nato allies don’t exactly inspire confidence… Good job we keep good links with the US.

I wouldn’t have advocated keeping Warspite, she was in a terrible physical state after WW2- HMS Vanguard on the other hand should have been retained- she was scrapped after a pitiful few years service.

I don’t any of the continental countries including Poland, Hungary etc. We are defending them and they are still messing us around by supporting France and Germany with the punishment after we left the EU. I think we should make our military support of these countries conditional on supporting us on other issues e.g; NI protocol.

Got to remember the EU will do what’s best for them (as should be expected) Not what’s best for a country outside of the EU. Especially one that left recently. This was to be expected. Our defence obligations are out with the EU and come from other treaties etc.

Honestly, I’d like to see more protection for the gunners.

The size of weapons is fine for what they are supposed to do.

If there is a bigger threat then a River2 or T23GP/T31 can be sent.

The ORCs have plating around the firing positions pity nothing on these as you say.

There is a River-class OPS to be based there.

Trent already is. Having the Med and N Africa to cover, she might not always be at hand.

Another addition to our illegal migrant taxi service!

Hopefully that issue will be addressed courtesy of the one way air bridge to Rwanda courtesy of Patel airlines.

Sadly not, the left wing lawyers will probably torpedo the lot with years of legal challenges and delays.

Starmer has a solution, it’s called free passage for unlimited numbers, or “safe routes” as he calls it.

To me if one knows you will be definitely be offshored that has to act as some deterrent.

As it is, they know the vast, vast majority will never be removed and job done and the smuggling rackets still rake it in. They’ve said as such on TicToc.

That’s a sick & immoral solution, belonging to the 18th or 19th centuries rather than the 21st. Priti is abdicating responsability & her parents came to the UK in exactly the same circumstance that these people she’ll deport 1,000s of miles came here.
Migrants are one thing, but refugees & asylum seekers another entirely.

With you there. Plenty of islands or areas of the U.K. that places could be built to house migrants. Or heres a crazy idea! speed up the process so we don’t have to accommodate people for years.

It’s a solution that’s been forced onto the UK govt by dogooders, the useful idiots in the HoL and the EU who allows people to swan across their borders to the UK.

The UK should pull out of the Internal Convention on Refugees, refuse passge of such into UK from third party countries ( France anyone) and push those that get here from EU onto the ROI ( the UK acting itself then as an intermediary). Dublin will be thrilled.

MOD reveals new cost effective replacement for the Type 45, say hello to the type 4.5 which the MOD has stated has been designed with a eye on quicker engine changes if the need arises: 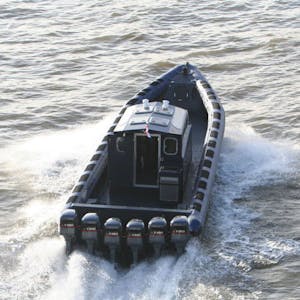 So long as it has modular, world beating and can catch a cricket ball at 3000mph in the sales pitch the U.K. will want it.

There was a Cutlas in my day. Sword class fast patrol boats operated out of Dolphin I believe. 1954

Has it got the latest Russian spec Bluetacked GPS & Binatone comms system?

On matters vexillogical, I see they are lowering the Red Ensign and raising the White. When she is handed over from the shipbuilders before comissioning into the RN, she should have flown the Blue Ensign surely in the interim?

Depends on owns it. If it is the yard, and it usually is before it is handed over, then it is the Red Ensign.

Blue is for government owned assets other than the Royal Navy e.g. Royal Fleet Auxilliary uses the Blue Ensign with a golden anchor in the fly.

Hi CR-hope you are well. I have an image of a Batch 2 OPV flying the Blue ensign prior to commissioning so as you say it might still have been in the hands of the shipyard before the handover in which case Cutlass would still ‘belong’ to the builder and thus fly the civil Red Ensign. In the case of the OPV I should have imagined it fell under the banner of the MoD or Navy doing last minute trials after accepting from the builder, so in this case flew the blue and anchor prior to commissioning!

I’m well thanks geoff, hope you are too mate,

As you suggest I think the Blue Ensign means owned by the government (MoD), but not yet a commissioned ship in the RN…

The UK does use a lot of different flags, the flag that Grant Shapps has behind him when he does interviews is apparently the UK civil aviation ensign..!

Thanks CR! I will be flying the Union Jack in Durban for the Queens Jubilee!﻿👍﻿

Or the British Army Navy. 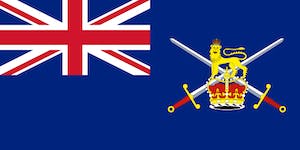 Hi Dern, Yeh, that flag appears on small boats and may be mexeflotes these days, but back in the day the Army operated the Mk8 Land Craft Tank. Which was in fact a small ship of about 1000tons. I read somewhere (also a looonnnng time a ago) that the commander was called a Captain Major.!? At one time or another, the Army has had or has its own navy and its own airforce; the RAF used have its own navy (Air Sea rescue) and still has its own army; and well the Navy has its own airforce and its own… Read more »

She has been flying the blue ensign ()there are images of it during the work-up period in Gibraltar’s waters). No idea why it was changed in the interim!

I wonder if it has something to do with being commissioned in Gib? I haven’t been able to find an answer.

Hi Lusty-nice to hear from you. Maybe the Rating in charge of the ceremony did not read the brief﻿😂﻿ Case for keel hauling?

Maybe! That said, it would be a good ship to be keelhauled on. Imagine if it was QE or POW?!?!

﻿😂﻿No barnacles on Cutlass although QE would be a better one for the CV!!

If my memory is right, been a few year since I done flag etiquette. A HMS will fly a blue on trials because it is under government ownership and operated for, despite the captain being RN they’re under token employment by the builder. Red would then be flown for commissioning ceremony because the vessel is back in builders ownership and operation until commissioning.

if memory is correct 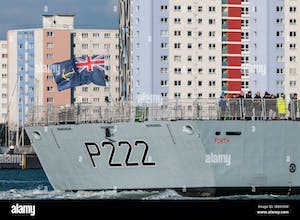 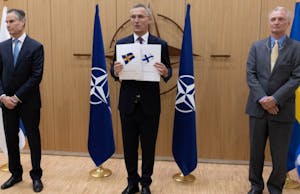