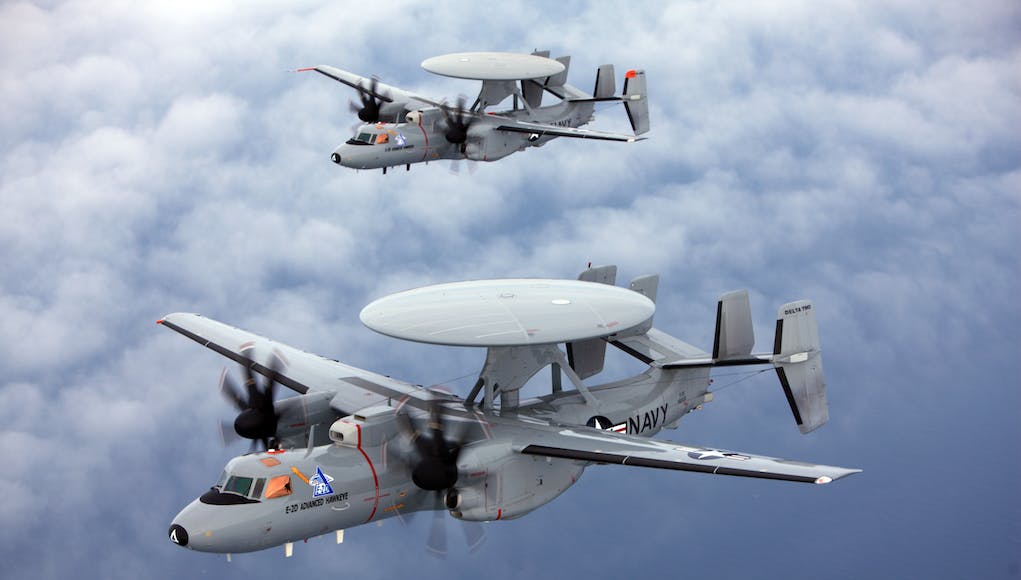 Northrop Grumman has been awarded a multi-year contract to deliver an additional 24 E-2D Advanced Hawkeye aircraft to the US Navy.

The contract also includes an option for nine additional foreign military sales aircraft. Production of the 24 US Navy aircraft funded by the five-year contract is expected to be complete in 2026.

The E-2D is the US Navy’s airborne early warning and command and control aircraft system. The carrier-based aircraft provides expanded battlespace awareness for carrier strike groups. Its two-generation leap in radar technology allows the E-2D to work with ship-, air- and land-based combat systems to track and defeat air, ship and cruise missiles at extended range.

The aircraft can also be used in a humanitarian assistance and disaster relief capacity for civilian emergency coordination.

“With this contract, we’ll continue production of these highly specialized aircraft while delivering innovative solutions that outpace advancing threats over the life of the fleet.”

They sure do get the best out of their aircraft Designs. Introduced first in 1960. As Shipborne aircraft go, They are pretty Amazing.

So much better having a fixed wing ASCS.

Are we sure we cannot launch it off the Ski jump and get arrestor wires for landing?!!!

Cats, traps, etc were only introduced when they started flying jets off carriers. I wonder how much work would be required, such as reducing weight or boosting engine power, to allow the propeller powered Hawkeye or a propellor powered fixed-wing UAV, get airborne from a QE class carrier.

Totally agree Daniele, an AEW version would fit very well into both the RN’s requirements as well as the USN’s new strategy of operating big deck amphibians as “Lightning Carriers” in a mini CSG role.

V280 Valor would be a better choice.

We could always convert the Swordfish at Yeovilton !

Isn’t there a Gannet there too? Can we scrape a squadron together with other Gannets!? 🙂

Yes but not still flying.

I’m pretty sure I’ve seen film of Corsairs being stopped by arrested wires. The Doolittle Raid planes took off ok. But the trick is landing I guess!
Still, you might expect Short Take-off and Very Short Landing type prop planes to manage… but what utility would they have and would they fit in a lift?

The lifts on the QE class were sized to take both Chinooks and V22 – I believe they can even handle two F35’s.

The US Navy launched a fully loaded C-130 Hercules over 20 times off a carrier in the 60’s using only 745ft for take off, less than 300ft fully loaded for landing, without any assistance.

Yes they did and based upon those trials decided to reject the concept for any further consideration. To fly a C-130 off a carrier required the deck to be entirely cleared of all aircraft, this was highly impractical for normal operations. It was also found to be a rather dangerous exercise as the wing only cleared the Island by 15ft!

To that end they decided to develop a dedicated COD derived from the new E-2 Hawkeye the C-2 Greyhound.

I think it would be possible though for a Hawkeye to do the same with some modification, Seeing as it has a much smaller wingspan etc.

If money wasn’t a problem then a Hawkeye flying off QE is more than feasible IMO.

From a US Navy vet

“Now, those old birds are retired, only to be found in a museum. Today, here is how I see it. As an old Aviation Boatswain’s Mate – Equipment (ABE), the only bird we have that is able to make a deck run, even if you have to clear the entire deck, would be the E-2C or the E-2D Hawkeye. The turboprops on those two types have enough shaft horsepower to accelerate the airplane to it’s minimum flying speed in the length of the flight deck.“

That is called STOBAR which is currently used by India and Russia, it has all the disadvantages of an arrested landing without the advantages of a catapult!

To launch this type of aircraft from the carrier ski jump, would also require rockets, attched to the aircraft, or gas from cylinders like a Drag Racer car. Have you seen drag racers?

You have seen the footage of C130 landing and taking off USS Forrestal haven’t you?

I think the future is a group of networked radar drones – imdividually less powerful but collectively much more powerful, survivable and offering much greater endurance. They could certainly operate from a QE carrier.

I suspect you may have been considering something smaller, but the V-247 tilt rotor UAV, or the other competitors in that program, seem to be an attractive solution for the UK, out 10+ years or so … if they don’t end up too expensive. They might mount a more advanced radar or might be able to just re-purpose Crowsnest, either letting the Merlins revert to ASW, or supporting Merlin based AEW from other vessels such as the assault ships or even patrol frigates for anti-piracy and drug smuggling duties. For comparison, the V-247 design spec calls for similar cruise speed… Read more »

In an earlier post I said that the USMC have now formalised their UAV requirements. The priority is to have some form of indigenous AEW, as at the moment they have to rely on the availability of a Hawkeye or Sentry. The US Navy are seriously pushing with the light carrier concept. This is where one of the Wasp class has at least 10 F35s embarked, with V22 providing tanking. The main problem is the AEW requirement. The USMC are forgoing any serious upgrades to their F18s to pay for their UAV, which is pretty much the Bell V247 in… Read more »

Agree with pretty much all of that, except for the “fully jump into bed with” bit because I don’t think MoD has the budget for a joint development, even for just the AEW radar bit, if that was what you meant? Better IMV to pick up a hopefully proven platform similar to the Wedgetail purchase. I was offering up a 10+ year timeline because I suspect it will take at least that long to get to operating capability for V-247 including a new AEW. However, as old as Searchwater 2000 is it might still have value on other RN/RFA vessels,… Read more »

I don’t know, it seems the U.S. is concerned enough about UK joint development programs that we are trying to get a jump on the Japanese next gen fighter ahead of you…

I don’t get how we can be a tier 1 ‘partner’ and not have access to the code behind the fighter. Shows we are not considered a partner, but considered a customer.

@Helions. Its not that the UK has no money for joint development, but it has to pick the most strategic and important technologies and capabilities with the most industrial and commercial impact first. Tempest does this for airframe, avionics, weapon systems, jet engine technology and the commercial spin offs from such technology development. The very small numbers for a UK-only AEW UAV program don’t (and the USMC are unlikely to purchase an AEW radar from Europe).

Hi GHF, I believe your spot on and that’s why the UK is interested in a joint development partner (such as the Japanese) to help finance the cost of of maturing the technologies that will go into the Tempest. Aside from the airframe, much of what is being developed by both the U.S. and UK for our respective Gen 6 fighter could be applied to the Japanese Gen 5 + development. Having a partner to share the costs of development and to test some of the technology would be a huge advantage over “go it alone”… The UK and the… Read more »

Mate, I agree. If we had the budget the obvious solution would be the V22 development as it could to AEW, tanking and carrier deliveries. But we don’t have the capacity for that unless something else is cut. To my mind the V247 is the best solution. It is a large twin VTOL turbo prop airframe so should have the capacity to generate the required electrical power for the radar. More importantly the US Navy/USMC have prioritised its development for AEW, so in theory we should start hearing about a prototype within the next couple of years. I know from… Read more »

When is the UK getting our cheap s%*t Crowsnest

First aircraft just started flying trials they are running 3 months late,due to be operational around 2021

Crowsnest is hardly ‘cheap’ or ‘s%*t’

It has the ability to be fitted to any HM2 Merlin, so could operate from T45s or T23s. Technically expanding the ship’s radar horizon. Although this would mean the Merlin couldn’t be used for ASW if fitted with Crowsnest.

What alternative do you propose?

The alternatives seemed to be a osprey solution, but that would have been stupid expensive, as we would have had to firstly buy the air frames and then work out how to fit a radar. The other option was the AESA radar out of the f35, but that was considered to be too expensive and risky (new tech) I think the only way they could have done this better within a sensible budget, would have been to rebuild the merlins that are in storage (assuming they haven’t been completely pulled aparts for spares and there is anything to rescue) and… Read more »

It’s not Shit, and It’s not Cheap either.

Talking to the project Leader a couple of months back, convinced me of both Points.

No Seriously Down Voters, it’s not Shit nor Crap, Trust me, I have It from the “Horses Mouth”.

What seems unclear is its network capability with the fleet. We know the UK cut corners with the wildcat and well pretty much every other piece of kit, so I wouldn’t be surprised if it couldn’t share it’s radar image.

Another question which might be answerable is can they carry missiles at the same time and can the radar also track ships/boats?. Crowsnest plus marlot or similar would be a good defence against small crafts in a saturation attack.

I think that while the Merlin Crows Nest system is effective. it is not nearly as effective as a fixed wing aircraft. the on-station endurance of the E2 is far longer than a helicopter. A smart idea would maybe to mount the radar on a MV-22 Opsrey. offers longer on-station time without requiring CATOBAR systems to operate.