The fifth Astute class submarine has officially been named Anson in a ceremony at BAE Systems’ Submarines site in Barrow-in-Furness, Cumbria.

The 97 metre long, 7,400 tonne submarine is due to be launched into the water in Barrow early next year, ahead of leaving for sea trials in 2022.

In line with tradition, Anson was blessed by The Venerable Martyn Gough QHC, Chaplain of the Fleet and Archdeacon for the Royal Navy and then christened with a bottle of cider being smashed against her hull.

“More than 1,700 people work on the Astute programme, which is delivering seven attack submarines to the Royal Navy. Earlier this year, HMS Audacious, the fourth boat in the class, left Barrow for her operational base, at Her Majesty’s Naval Base Clyde in Faslane. Work is also well under way in Barrow on Astute boats six and seven, as well as the first two boats in the Dreadnought class, which is the next generation of nuclear deterrent submarines. Despite the COVID-19 pandemic, work on both Astute and Dreadnought has continued throughout this year, with major changes being implemented across its Barrow and satellite sites to enable employees to work safely and adhere to social distancing. It is for that reason that only a handful of people were able to witness the naming ceremony.”

“The naming of Anson is a significant step towards her joining the other four Astute class submarines already in service with the Royal Navy. Throughout this year, we’ve adapted the business to keep our people safe whilst allowing them to continue the important role of delivering critical capability to our customer. Reaching this important milestone is testament to the dedicated work of our workforce, our Royal Navy partners and the Submarine Delivery Agency.” 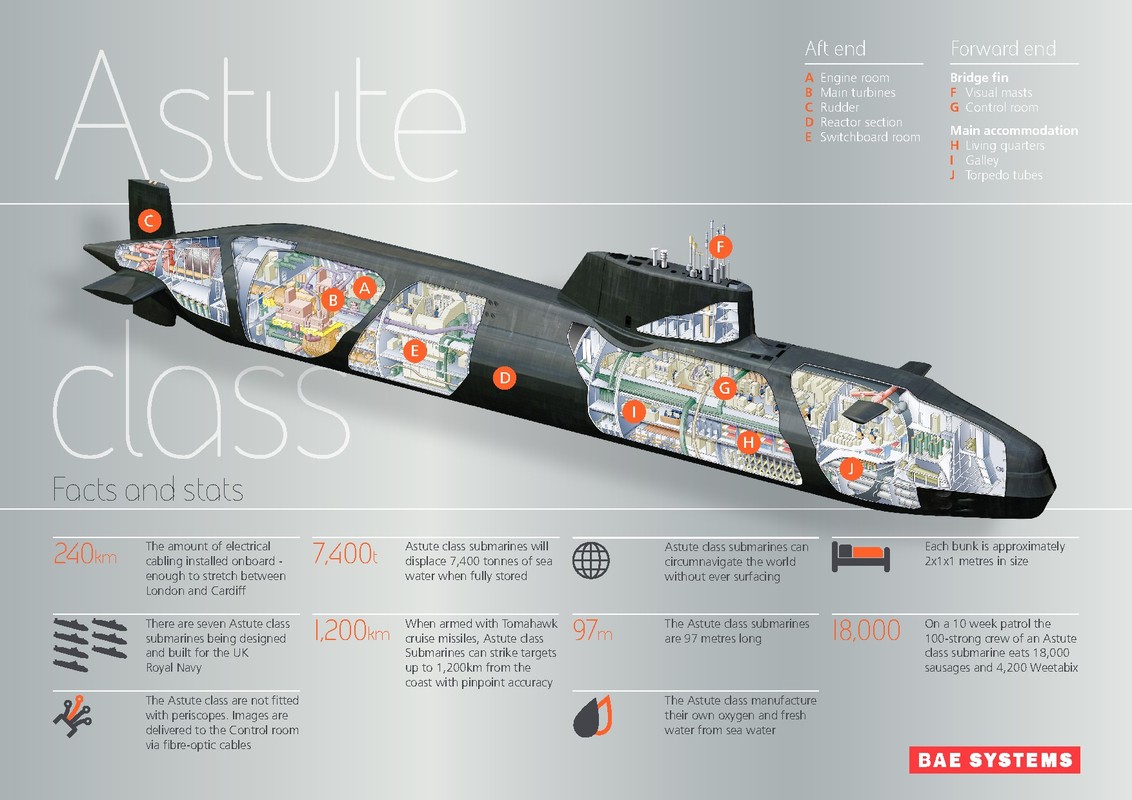 “This is the first submarine to bear the name, HMS Anson, but the eighth naval vessel to carry the title which has a rich history spanning several hundred years. I am certain she will carry on that heritage well into the future as she joins a world-beating, cutting-edge submarine fleet that is of strategic importance to the UK’s security and prosperity.”

BAE also say that advanced nuclear technology means the Astute class submarines never need to be refuelled and they can manufacture their own oxygen and fresh water from the ocean, meaning they are able to circumnavigate the world without surfacing.

BAE Systems’ Submarine business employs approximately 10,000 people mainly in the North West of England with many more in the supply chain. The business spends more than £1 billion per year with over 1,000 suppliers who support the Astute and Dreadnought programmes, more than 85 per cent of whom are based in the UK.

stunning capability, and deadly in the hands of the RN 🇬🇧

God bless all who sail in her. Very proud of the engineers and sailors.

Absolutely great news for the RN, another of these fearsome beasts ready to take to the deep, with the finest submariners in the world to crew it….

I hope they have stopped the practice of stripping spare parts from the in-build subs to keep the others operational!

If they’ve resolved the mods done to boats 4 + 5 I also hope they can get 6 and 7 operational in double quick time.

If only an 8th could be slipped in.

We struggled with 10 admittedly older S & T’s, the new shiny ones won’t stay new and shiny forever so something will have to give at some point.

Unusual to see a picture of the underside of the boat, what are the silver/red panels for?