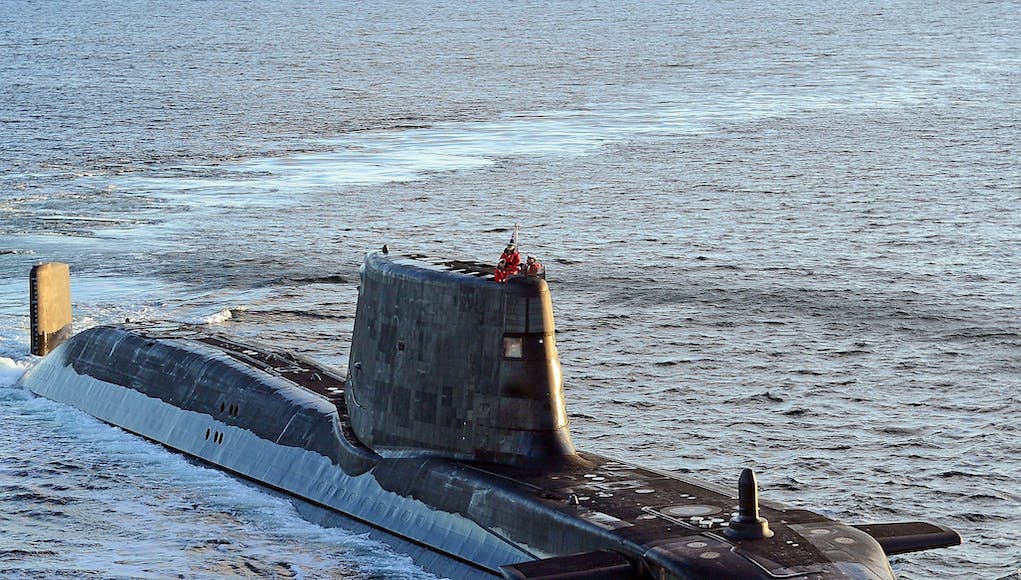 HMS Ambush has arrived in Gibraltar after Spain calls for ‘Joint Control’ of Gibraltar following Brexit.

HMS Ambush is an Astute class nuclear fleet submarine of the Royal Navy, the second boat of her class. Ambush’s nuclear reactor will not need to be refuelled during the boat’s 25-year service. Since the submarine can purify water and air, she will be able to circumnavigate the planet without resurfacing. The main limit is that the submarine will only be able to carry three months’ supply of food for 98 officers and ratings.

It’s started.. but it would be very foolish of the Spanish to threaten us. We are far stronger than them military wise and we are also supporting their only industry – tourism.. If British people stopped holidays in Spain it would fall on its arse!

Good to see it in our port ! Shame it will leave soon and leave us with no defense again

They would never chance it! They like a game of cat and mouse but they know in a real game we would hand them a spanking

Nothing will come of it until Gibraltar want it because Spain has part of Morocco that it won’t give back.

Perhaps they would like to have a chat with a Tomahawk cruise missile?

What would happen if we had a war,as we both use euro fighter typhoons?

Nothing. We’re NATO members. Can’t happen other than in bad fiction.

We both have men and women fighting. Both have guns what your point ?

NATO would destroy both countries.

That’s not quite how NATO works Matt.

Remember the typhoon has been mainly made in UK beside the left wings and some control panel but mostly done in UK. I have to tell you that the RAF typhoon is much more advance and capable then typhoon in German airforce or Spanish or Italian so we have better quality and much more advanced specially at electronics

Sarcasm is lost in text.

Much more dangerous would be the use of an armourd column to seize the town and helicopter troops to seize the top of the Rock, then present the world with a fait accompli.

Salt in the wound for the Spanish???I love it, your move Spaniards??????

Look we are a Nuclear power and it’s time Europe understand this they need to talk to us about trade deals the quicker the better we now need strong men in government to make sure we get what we want.

So Britain expends it ~120 warheads on most major EU cities – the France retaliates by turning the whole of the UK too glass. Please tell me this wasn’t a serious comment about threatening nuclear warfare as an economic negotiating tactic!

No it was not I was pointing out that Britten is a strong economic and powerful country that has always stood by Europe and now we want to keep our trade deals they need us to keep them safe.

Uh excuse me. Who keeps Europe safe ? As the worlds only superpower America does not always get what we want. The British and American people have many things in common. An egotistical sense of our importance to the world is one.

In 1957 my father was posted to Germany and we the family went with him to live there and then in 1962 we went back again to Germany and all the time my father was there the training was to stop the Russian from invadeing Europe and in the 1980s I went to Germany as a soldier in the British Army to defend Germany from the Russian so don’t tell me we have not done our bit to keep Europe safe.

wow, the words “demand” and “war” were uttered rather quick….

That’s exactly what it is. The whole thing reminded me of HMS Hood when it sailed the world showing the flag.

What are we going to do? Nuke them because they ask for Gibralter back?

The whole point of a deterrent is never to use it.

So we threaten to nuke them because they ask for talks, but we won’t actually carry it out?

At first I was wondering why they were flying the red ensign, then I realised it was guys in suits.

[…] HMS Ambush has arrived in Gibraltar after Spain calls for ‘Joint Control’ of Gibraltar following Brexit.  UK overseas territory Gibraltar is a major staging post for military operations globally.  HMS Ambush is an Astute class nuclear fleet submarine of the Royal Navy, the second boat of her class. Ambush’s nuclear reactor will not need to be refuelled during the boat’s 25-year service. Since the submarine can purify water and air, she will be able to circumnavigate the planet without resurfacing. The main limit is that the submarine will only be able to carry three months’ supply of food for… Read more »

Boarder guards, surely you mean border guards? Or were they asleep on the job?