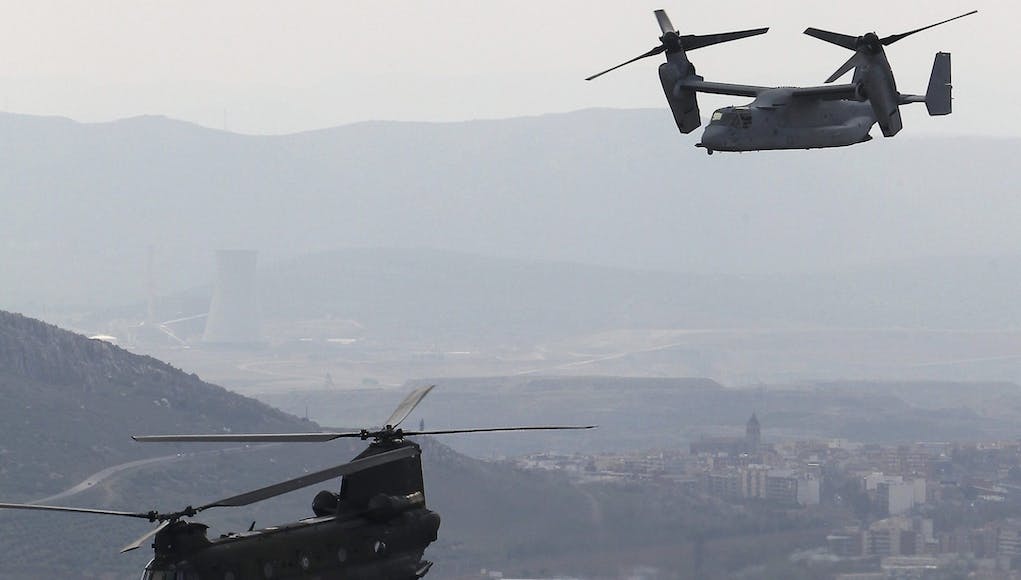 When it comes to transporting troops to/on a battlefield there is always one vehicle that comes to mind, the Chinook but there may be a new contender for this role: the V-22 Osprey.

The iconic and unique tilt-rotor design of the Osprey gives it the take off and landing potential of a helicopter but the flight characteristics of a plane; it truly is the best of both worlds.

There is debate about whether a purchase of Ospreys would be an enhancement to the UK’s capabilities or just an expensive replacement for the perfectly good Chinook.

Though while it is currently a moot debate as the funding is just not present to purchase a fleet of Ospreys, it is always worth considering potential options.

In a straight up comparison it is unclear which if the two aircraft is superior, as while the Osprey can fly further, faster and higher, it flies at almost double the cost of the Chinook as well as having half the troop carrying capability.

As a Chinook can carry up to 55 troops in one load while the Osprey would top out at 32 but that being said a Chinook does not usually carry 55 troops at a time.

But it is all well and good to be able to carry 55 troops but a Chinook could only take them approximately 200 nautical miles, as it has a maximum range of 400 nautical miles.

Whereas the Osprey has a maximum range of 879 nautical miles meaning it could transport troops just shy of 400 miles after take off; so the question is raised, is it more important to have more troops with a shorter range or less troops being deployed further?

Though the answer to that would lie with the operation that was to be undertaken as in combat everything changes and it can change quickly; so speed can be of the utmost to extract for reinforce troops.

Here the Osprey comes out on top again with a maximum speed of 275 knots (316 mph) compared to the Chinooks 170 knots (196 mph), so the Osprey could always get to the designated point quicker.

Yet this all comes at an extra cost, the Osprey costing a whooping $72 million (£52 million) per aircraft compared to the $39 million (£30 million) for a Chinook. But the purchase price is just the start as the operating costs are vastly different.

One of the most important of these is that they can serve as carrier borne mid-air refuelling aircraft which would serve to extend strike ranges for F-35s if we were to use them on our carriers.

They can also serve as Anti-Submarine Warfare or Airborne Early Warning platforms but then this is a role currently covered by the Merlin fleet.

This means that the Osprey while excelling in many areas and out-performing current vehicles, does offer the UK and other nations substantial improvements. But this all comes at an extra cost and an expensive one at that.

Where 24 V-22 Ospreys could be bought the UK could buy 48 Merlin HM.2s and 35 Lynx Wildcat helicopters which not only fulfil the same capabilities (except mid-air refuelling) but give a greater fleet size which in turn gives much more force flexibility.

If you can’t land troops from 200 miles out you shouldn’t be trying. The extra 200 miles offered by the Osprey doubles the cost, halves the number of troops available and does away with the possibility of an escort by helicopter gunship. An F 35 could be used but with very different capabilities and with limited loiter time at 400 miles. Doubtful benefits for the U K ..

The RN only need maybe 20. With pallet Crowsnest (if developed by the USMC), in flight refuelling and spare engines for the F-35b plus folding capability and fully navalised. Not to mention SF/RM deployment and SAR/CSAR. No brainer really. We could offer the USMC on board maintainence on the QE class…they’d love it. But must be RN operated otherwise they’ll be wasted and end up costing twice as much as they would need to. (Any naysayers on that can watch what happens with crew rotations on the RAF F35 fleet. You don’t join the RAF to be a sailor!) An… Read more »

I agree Ali, from a carrier perspective, the V22 would represent a great force multiplier, AAR, COD and AEW would be tremendously useful for the QE class.

From a purely RAF perspective I would struggle to justify it.

It will be good for regular air transport to small remote islands with no airstrip. I think Tristan de Cunha is within V22 range of Assension.

Can’t see how you can compare the two, very little to do with each other.

While the extra AEW coverage and AAR of the V22 would be nice it’s the platforms ability to conduct CSAR and deep insertion of special forces that make it really worth while as well as COD.

Even just a small fleet 7 or 8 would be handy.

There are a lot of wish list articles today. There are a lot of things we would like to have if we had unlimited money to buy and support them and unlimited trained personell to man and maintain them. Unfortunately we along with every country that exists or has ever existed has neither.