If you’ve been on social media recently you can’t have failed to notice the volume of outrage over the announcement that the news that the Solid Support Ship contracts are being tendered internationally and not being awarded to BAE on the Clyde.

Some of the tweets we found are downright incorrect, have a look:

? Whatever happened to this promise @Conservatives !?

“No British warship has been built in a foreign country for the last 50 years and we do not intend to start doing that now”: @Number10GovUK 17 May 2012 https://t.co/jDxBkl6tu0

UK Govt selling Scottish shipyards down the river once again. Broken promise after broken promise from these charlatans. Gavin Williamson due to Govan shipyard today, I’m sure union officials will tell him exactly what they think of him and his Govt! https://t.co/qlea3M71zR

Even an official SNP article on Clyde shipbuilding states, despite the support vessels having never been slated for the Clyde:

“Now, the order for the additional general purpose frigates could go elsewhere too. In fact, a new £1 billion order for three Royal Fleet Auxiliary ships is already going out to full international tender. This is despite UK government claims in 2012 that, ‘No British warship has been built in a foreign country for the last 50 years and we do not intend to start doing that now’.”

The unions are advocating that the build stay in the UK, not that it be done on the Clyde and this is something we agree with. There are strong arguments to build these ships in the UK.

“The Royal Fleet Auxiliary contracts are the key to unlocking the country’s massive shipbuilding potential. But Ministers refusal to put the UK’s interests first will mean that instead of a massive programme of shared economic and employment re-distribution, our firms will be competing against each other for slivers of complex warship work. It beggars belief that the Government wants to give this golden opportunity away to foreign competitors when working class communities up and down the country are crying out for decent work.”

According to the ‘National Shipbuilding Strategy’ document, there are three tenets regarding UK shipbuilding policy that impact on the build location of contracts:

A recent article in The Herald had claimed that shipbuilding on the Clyde has “been dealt a blow” as new support vessels aren’t going to be built there. The problem? The were never going to be, BAE aren’t even bidding for them.

Another article even says “unions had hoped the vessels would be constructed in yards across the UK and leave the specialist yards on the Clyde to built complex warships“, support vessels are not complex warships by any definition and the unions appear well aware of the fact. Another article appeared in The Evening Times which points out that unions are demanding the vessels are built in the UK, as seeking an international tender “undermines the national interest” however none of them are advocating for the 40,000 tonne support vessels be built on the Clyde which is expected to be at capacity until into the 2030’s, long after the date the vessels will be required.

We spoke to a contact at the BAE yard in Govan, who told us that the article was a bit surprising as no one at BAE expected the vessels would be built on the Clyde:

“Calling this a blow is a very strange choice of words. It [the article] came as a surprise frankly, I don’t think anyone here considers this any sort of blow especially as we were never going to be building them and BAE have no intention of bidding for them. They’ll be going to South Korea like the tankers as I don’t think any UK yard is considering a bid for them, we certainly aren’t.” 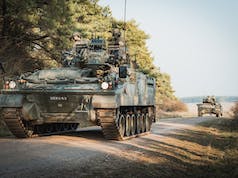 Outrage in Scotland over contracts for ships that can’t be built on the Clyde, not going to the Clyde – PARAMUSESA

[…] post Outrage in Scotland over contracts for ships that can’t be built on the Clyde, not going to th… appeared first on UK Defence […]

But who is it on social media???

If true there’s one interesting fact in here. In the SNP article is quoted as saying “In fact, a new £1 billion order for three Royal Fleet Auxiliary ships…”. Maybe I missed it in other articles but this is the first reference to contract price that I’ve seen. There are a few years of inflation between the Tide and SSS contracts that need to be factored in but even so that puts one of the new SSS at over twice the cost of a Tide. Clearly the SSS will, although of comparable tonnage I assume, be more complex ships but… Read more »

Solid support ships are in general far more complex than tankers. There also isn’t much of a cross over to a commercial equivalent (ie product tankers). If you consider that a large part of a tanker is taken up by her tanks, it’s an awful lot of empty space with not much more than a couple of pipes and a ladder. The solid support ship’s cargo holds are specially designed areas conforming to strict safety standards. I suspect that these ships will be as capable as the Fort Victoria with regards to flying ops, but the price is probably a… Read more »

Thanks. According to Wikipedia Fort Victoria can support 5 Merlin with 3 in the hangar so presumably worked up operating procedures for juggling between deck and hangar as required like a much simpler version of aircraft carrier ops. If we get that it would be a OK but, in my opinion, if we get something more like a Tide’s ability to host a single Merlin that most definitely would not be OK. Personally I don’t want these ships to do too much singing and dancing, their primary function is critical, but given the Norwegians managed it with their new supply… Read more »

People are looking at this as a one off order for 3 ships. Surely we should be more clever than this. Get a single hull type and build multiple ship types from it, replacing all RFA ship types with it over the next few decades. We could also look at it for amphibs and LPH if the funds allow in the future. Keep the build in the UK and secure a long term contract, sharing development costs, getting economies of scale, secure investment in infrastructure, and job security for thousands working in the build and supply chain. That would enable… Read more »

(Chris H) T.S. – Eminently sensible comment there and we could use the ‘Tides’ as the hull and superstructure basis seeing as they are British owned designs. No reason not to use a double hull for a stores ship as it gives an option for conversion to tanking later if necessary. The Canadians went the other way and just converted a container ship (MV Aterix) for stores and fuel supply and did it rather well. But we are faced with the stonewall of Civil Servants who only see numbers on their laptops and just have NO interest in having regard… Read more »

T.S. with all respect, yes you could possibly do that but a tanker and an SSS are very different things.
Converted ships are rarely good ships. Diligence as much as I loved here suffered from this. It often takes more money and time to do it right.
I sincerely hope that the MOD decide what they want from these ships, keep it simple, and stick to it. After all these ships are supposed to be for replenishment not warships on the cheap.

I was just browsing something from the USA and the thought struck me that maybe we are missing a trick here with the two consortia that are bidding for the Type 31e contract. In the USA when a very large contract is out for tender and the bidders are down to two they tend to demand that whoever wins shares some workload with the losing bidder. Basically it keeps a wider industry capability working and not a ‘winner takes all’ attitude. So should we (for which read the Government) really be saying to these two very capable consortia “Whoever loses… Read more »

If Babcock win the the Type 31 contract then as far as i believe the ships will be built across the UK and then assembled at Rosyth. This seems sensible to speed up the built (first needs to be commissioned by 2023) and keep max number of yards operational.

as i understand it RFA ships are not capital warships and a tender was put out but as no UK firm put a bid in then the UK had no choice but to go overseas,this is what happened with the tide class resupply ships…the problem i believe is the government should not have allowed BAE to hold the monopoly on defence..long before BAE we had shipyards all over the UK building all of our ships which employed millions of men and women but lack of spending on keeping the royal navy at the tip of the spear ultimately led to… Read more »

What is complex? Sir John Parker asks this question in his National Shipbuilding Strategy report and cites cruise ships being complex. What is less complex with the fleet solid support ships, in what way, electronic, mechanical, steel work, what!? BAE is not interested as they are not shipbuilders and see anything less than a nuclear sub or Type 45/26 as a complete waste of time, unlike real shipbuilders. I’m sure Barrow would have been interested in building these ships or taking part, but BAE has made sure that that facility is just based on sub building at the present. This… Read more »

All the hot air and grand standing from the above avoids one fact”No British Yard has quoted for the builds” even if they did they would be uncompetitive so to hypothetically to give the work to a British yard would be at cost premium would conflict with the Defence budget . So get real and can the puffed up outrage these are not Warships but for the RFA