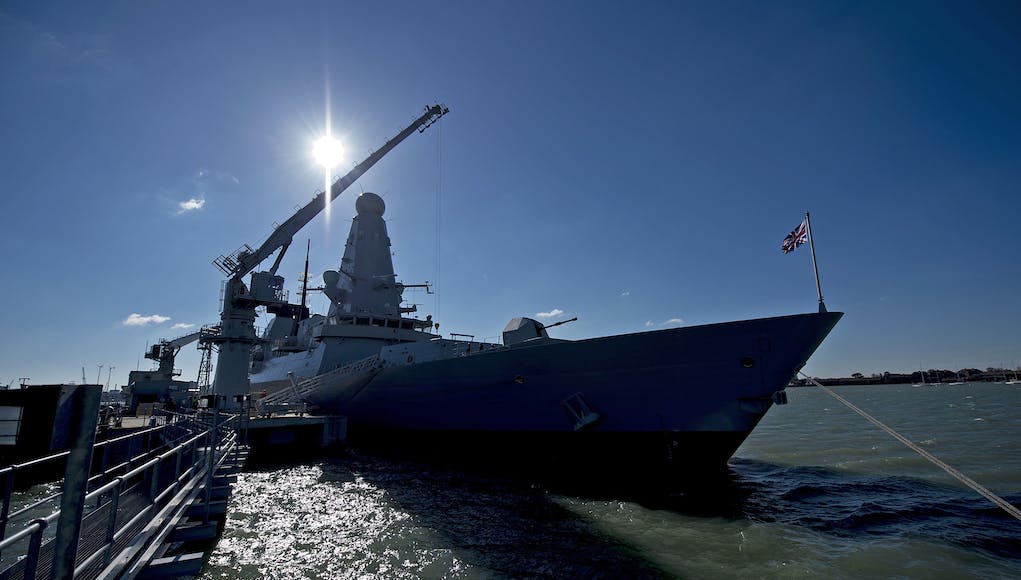 Images are Crown Copyright, provided under the OGL.

Staff from Defence Munitions Gosport which is part of Defence Equipment and Support are key to the successful loading of ammunition onto all Royal Navy vessels. They operate the cranes and supervise ships staff as well as providing manpower to load the missiles from ammunition barges to the jetty and then onto the receiving ships.

Sea Viper is capable of defending the Type 45 and ships in its company against multiple attacks from the most sophisticated enemy aircraft or missiles approaching from any direction and at supersonic speeds. It can even engage more than ten targets simultaneously – a huge leap in capability for the Royal Navy.

HMS Diamond recently completed six weeks of operational sea training off the coast of Plymouth. The training is designed to assess the operational readiness of the naval vessel for front-line duties.

It also marks an end to eight months of trials, training, instruction and assessment, performed after the destroyer underwent a comprehensive maintenance and upgrade package.

The Type 45 destroyers were built to replace the Type 42 destroyers that had served during the Falklands War, with the last Type 42 being decommissioned in 2013.

The National Audit Office reported that, during an “intensive attack”, a single Type 45 could simultaneously track, engage and destroy more targets than five Type 42 destroyers operating together. After the launch of Daring in February 2006 Admiral Sir Alan West, a former First Sea Lord, stated that it would be the Royal Navy’s most capable destroyer ever, as well as the world’s best air-defence ship.

The reduction in the number to be procured from twelve, then to eight and eventually down to six (in 2008) was controversial.

Images are Crown Copyright, provided under the OGL.

You mean we bought more than 1 per ship….?