Home Sea IN PICTURES: HMS Prince of Wales looms through the fog as she’s... 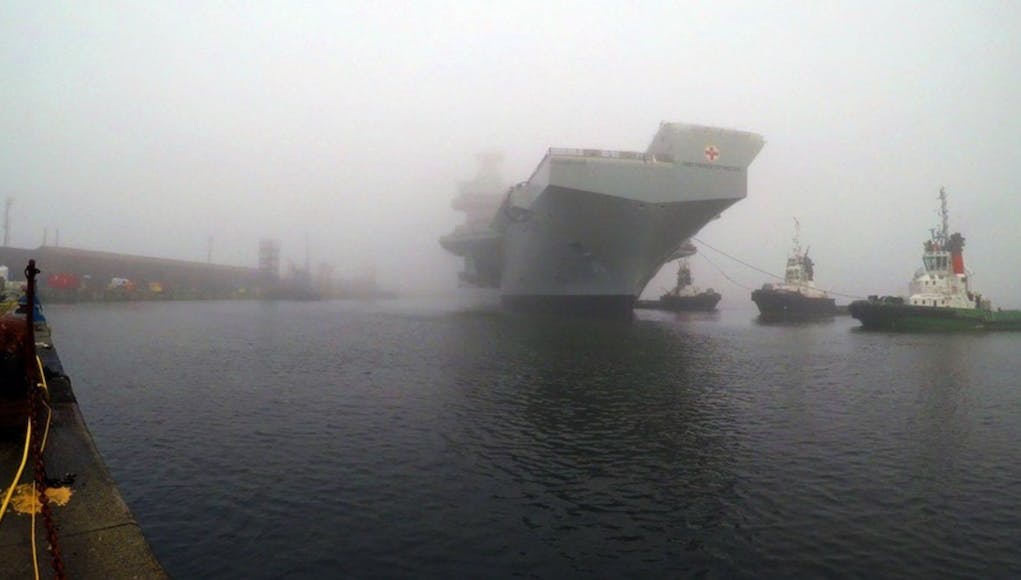 Pictures show HMS Prince of Wales loom through the fog as the aircraft carrier was floated out of dry dock at Rosyth.

The supercarrier was moved from No. 1 dock to J&K berth this morning.

“All in all it was a quiet affair, albeit a bit stressful but everything went as it was supposed to. We certainly didn’t get the fanfare QE got for her float out. Presumably they want to avoid any sort of speculation in the media.”

HMS Prince of Wales is currently on track for sea trials in mid-2019.

And the UK quietly doubles her carrier fleet …..
I am disappointed there wasn’t more about it on the news etc but this is how we do things. Quietly, professionally and properly ..

And not a single news story about it. The UK media is a joke.

Happy to see her float. Looking forward to seeing her take over from HMS QE for F35 trials in 2019.

All we need for the QE class to be world beating carriers are
1) enough F35Bs to utilise the carriers and deliver on their huge potential= at least another 48F35Bs will need to be ordered
2) Enough frigates and destroyers to escort the carriers whilst still retaining a force level capable of performing other tasks as well.
26-30 frigates and destroyers is where we need to get back too.

Agreed Mr Bell, in an ideal world, (the one we don’t live in) we would have 30 surface escorts, my ideal would be 9 type 45, 9 type 26 and 12 type 31, plus 12 Astute SSN’s. I would like to see the 5″ main gun made standard fit across the escort fleet, the 45’s would ideally have a mix of Astor NG and quad packed Sea Ceptor to give 80+ missiles thus able to throw a ring of steel around a task group out to 100 miles. As the technology improves, I would also add laser weapons high on… Read more »

And then there were two 🙂

Great to see this. Thanks for posting the pictures.

“As stated in the Strategic Defence and Security Review, the government plan to enhance a Queen Elizabeth class aircraft carrier to support amphibious capability, that ship will be HMS Prince of Wales.” So the LPDs go.

If something went wrong is the only reason the media would report on it.

However, it’s an amazing achievement and we should all be very proud.

it’s really strange how vague they are being on the upgrades for amphibious warfare role. At this late stage you would think they would have detailed diagrams comparing the two vessels to show off.

I have been looking everywhere for info – none.

Even tried looking closely at the pictures to see if there are any obvious differences with QEC and doesn’t seem to be.

Steve & Pacman27 – Ah well now they have a cunning plan. Those two lifts have 3 buttons marked:
‘FLIGHT’
‘HANGAR’
‘WET’
And what the Andrew can now do but only on PoW is put the LCVP Mk5 Amphibs full of Bootnecks in the hangar deck, push them with the aircraft tugs onto the lift, hit ‘WET’ and the lifts drop down to just above sea level and then angles out to give the lads a ‘Royal’ send off skidding out to sea…..

I believe POW has wider walk ways on key corridors to facilitate troop movements to the flight deck.

I think accommodation, weapons and RM kit specific modifications have also been planned but not yet implemented?

Its going to be 2030 ( first full refits) before both ships are fully modified to the duel Carrier/amphibious spec.

Well done to all involved. A great asset for the RN.

Why my comments seem to await moderation?

Nicely stated John Clark.
i think your ideas of a reasonably sized RN git for purpose is probably the same as mine. Just wished the mandarins in Whitehall and the new DS “Fresh Prince of Bell Air” would fund it.

We can but dream, so much capability was stripped from the RN during the pointless Afghanistan intervention.
The cost of maintaining 10,000 troops in that Country, sucked the RN dry of resources

I certainly mean no disrespect to our veterans, they served with distinction and did everything asked of them, but it was an ultimately pointless struggle against a people with no desire to change ….. with tragic consequences for many brave youngsters and their families.

Very happy there are two.

Now to fund it all properly.

Congrats to all involved. And it’s somehow appropriate there was no fanfare, and that it happened in a fog, a fog which much if not all of Scotland shared.

I didn’t make the point that such a fog is quite rare in Scotland, we’re more used to mist and haars, particularly the East Coast. Yet it’s a fog which seems to have descended into the brains of many in Scotland, including the Government and indeed the First Minister who gave no congrats to the QE, and none to the PoW either – a great feat of UK engineering, but assembled in Scotland. You’d think they’d be proud of them, both conventional and non-(dreaded)-nuclear, but no, not a word, not a dicky bird, the FM off to some book thing… Read more »

A lot of POW is already at sea ….doing trials on QE.
The only way QE got out was by STORROB ing POW blind.
Lets hope they can get the replacement/repaired items back in time to meet the timetable.