The AW101 is a medium-lift helicopter used in both military and civil applications around the world. Several operators, including the armed forces of the UK, Denmark, Norway and Portugal, use the name Merlin for their AW101 aircraft. 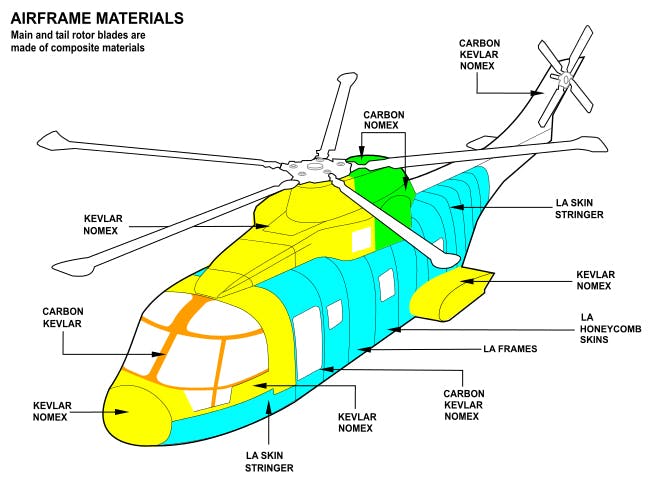 The Offset Agreement, signed by Leonardo MW Ltd, provides for establishing critical in-country maintenance capabilities and precedes a contract for the supply of AW101 military helicopters.

Leonardo, the owner of PZL-Świdnik, the Group’s main industrial pillar in Poland, announced that its UK subsidiary Leonardo MW has signed an Offset Agreement, valued at around £77m, with the Polish Ministry of National Defence.

The signing of the Offset Agreement precedes a contract for the supply of AW101 military helicopters.

The Offset Agreement provides the Polish Ministry of National Defence with the commitment for establishing in the Military Aviation Works No.1 in Łódź, part of the Polish Armaments Group (PGZ), critical maintenance capabilities for the AW101 helicopters and its dedicated mission equipment.

“The scope of the offset programme fully meets the stringent requirements of the Polish Ministry of National Defence, confirming Leonardo’s commitment to a solid and long-term cooperation with the Polish Armed Forces and Polish industry for the delivery of relevant capabilities required for the maintenance of modern military equipment, as well as development and sustainment of the necessary skills and experience in the country.”

The aircraft is manufactured at factories in Yeovil, England and Vergiate, Italy; licensed assembly work has also taken place in Japan and the United States.

More of this please, we need to concentrate more on this business in the future. The Merlin has proved to be a worthy replacement for the venerable Sea King.

I agree, I was saddened with the sea kings going but we couldn’t have got a better replacement. I do miss the search and rescue RAF and RN seakings flying around up here in northern Scotland almost as much as the nimrods….

I have less fond memories of the Sea King. Having to uncouple and refasten a sling without a static discharge pole. You get a bloody good belt, similar to a top of the range farmer’s electric fence. Quite impressive when they are hovering above you…the size of a single decker bus…and the noise!

I agree, I was surprised more countries have not ordered this. I think its in the same price bracket as the NH90 but larger and not plagued with the same amount of problems.
The NH90 seemed to have hoovered up the work share with European countries.

Any chance of a couple more for the RN?

Lol at the downvote….go on, do it again! I’m So bothered! Sob! Get a SOH, was replying to Paul above!

Daniele I have no clue who does some of these downvotes, as more Merlin for the RN is one of the most sensible comments posted. The Merlin/type 23 combo is a sub skippers worst nightmare.

From me too. If there is one thing you can’t have enough of, it’s medium lift helicopters, and the armed forces are severely lacking in this respect, the amount of utility is immense.

Agree Keith. I was thinking more along the lines of HM2 for ASW, ASCS though, not HC2 for the CHF.

On that note, would they still manufacture the HM2, or would they just do an asw fit on the HM4 tail ramp airframe?

I have no idea to be fair. I don’t see why not.

This would be a good time to do so as I imagine they would be cheaper if we add them on to the order. I also think we should have regular run of these over a number of years in order to keep production going. Even if we simply add 4 per year it would be a nice tick over and keep new machines flowing into the inventory.

Yes, a steady drum beat of orders. I don’t understand why this is not so. Caused lots of problems with building of the SSNs.

I would be more excited if it were the UK was preparing to buy UK built Merlins.

Never really understood why the RAF had to give up all of its Merlins to the Navy. Appreciate it’s an excellent multi-platform for the RN and RM but the RAF now has a significant lift gap between the Pumas and Chinooks.

Andy B
Reply to  Crabfat

Perhaps when the Pumas go, the RAF will replace with new Merlins then, which would be an ideal time to join up a buy for further numbers for the RN too.

And they really need a replacement for the Puma! AW149 perhaps…manufactured in the UK!

Hi Crabfat. Because the then government of the time cut the helicopter budget. The RN was to procure SABR, Support Amphibious Battlefield Rotorcraft, around 30 to replace the similar number of existing Sea King Commando HC4. With their budget cut, the MoD decided to transfer existing RAF Merlin to the RN. The RAF was to be compensated with 22 more Chinook. This was reported around the time of the announcement of RAF Cottesmore closing and 2 Harrier squadrons being cut. All announced by the defence Secretary at the time, Ainsworth. I still remember him claiming that the cuts to the… Read more »

The RAF didn’t want Merlin in the first place, they wanted Chinook! Politics intervened and it was forced upon them… Merlin is not a particularly good medium lift battlefield helicopter, complex in comparison to other helicopters used in that role, also fragile, it has almost the same foot print as a Chinook, an unnecessary for role third engine, can only carry six more soldiers than Puma HC2 and a smaller sling load than the latter. It is fantastic if you want a long range SAR type (albeit the S92 and H225 sell far better in that role) or to conduct… Read more »

Yes a Chinook buy would have been better bet for the MoD. It seems to be forgotten that the aircraft that Merlin was to replace was the Wessex for the RAF. If you think about it as platforms have become more complex and larger oddly perhaps Wildcat as it is now would have been a better fit for the RAF as a Wessex replacement. And as we know Wildcat is often slated as being too much helicopter for the AAC! Puma (and Sea King) were such great aircraft if you look at their specs and look current models available you… Read more »

I don’t know really. These sort of questions always end up down that rabbit hole labelled ‘inter service rivalry’ and things don’t end well…….. Personally I look at this way. I see Chinook more as a small ‘aeroplane’ at the end of the RAF part of the logistic chain. The next step down from C130 as it were. The connector that flies from the airfield with runway out to point of need. Even though the RAF is the type’s second biggest operator we still don’t field that many compared to the US Army. The latter is the world’s second largest… Read more »

Well more exports orders increases GDP and as defence is 2% of GDP this can only be a good thing.

Speaking as a Westland employee of 40 years I couldn’t agree more!

This is good news for us as the Poles cancelled their multi-billion pound deal with Airbus (Eurocopter) to buy 50 H225M (EC725) Caracal helicopters to replace their ageing Mi8/14s. Which at the end of the day is still an updated Super Puma, complete with the inherent design flaws.
This is the start of the manufacturing process being set up in Poland, possible from kits built here and in Italy. Apparently there was a lot of underhand dealing to push through the Airbus contract which is currently under investigation. Not like the French have any history of short cutting deals.

Imagine the benefits had Westland not been sold off to the Italians and HMG actually taxed large companies on their profits, instead of pretending to. We might actually be able to afford more than a token fleet of these ourselves!

Not an uncommon story is it.

You can blame GKN for that! Having said that, I would rather Westlands be Italian owned than by the US. Westlands is fully integrated within Leonardo, I couldn’t see that happening under, say, Boeing.

Splendid news for AW. Merlin has proved herself over and over again to be an extremely capable helicopter.
To cut the UK helicopter budget is a very short sighted move in my opinion.