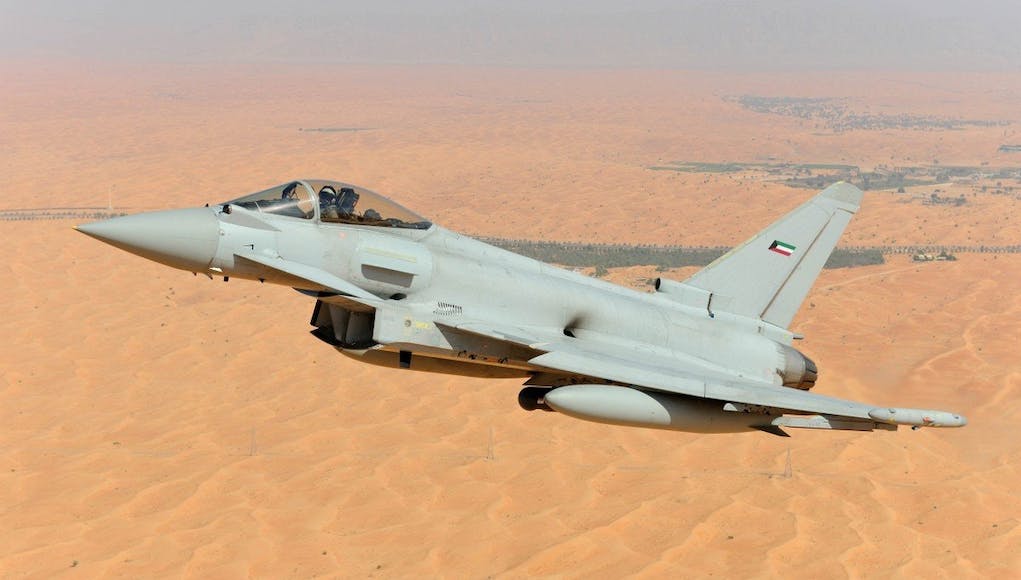 Following the 2016 signature of the contract to supply 28 Typhoons to Kuwait, production has now started.

Production activities have begun in order to comply with the contract and the Customer expectations and Long Lead Time items procurement has been ‘immediately activated and the Supply Chain has been mobilised’, say Eurofighter.

“Production activities started in the second half of 2016 and are currently in line with the baseline plan and, in some cases, ahead of schedule. The wing skins of the first left hand wing at Leonardo and right hand wing at Airbus Defence & Space in Spain have already completed and the assembly phase will start before the end of 2017.

The first rear fuselage section is going to start the “Stage 2” assembly phase at Leonardo in early 2018, while the “Stage 1” assembly phase is already running in BAE Systems for the first five aircraft.  The centre fuselage section, produced by Airbus Defence & Space in Germany, will start the assembly in the first half of 2018 having already commenced the “pre-assy” phase according to the plan.

The capability packages for Kuwait will include the integration of Storm Shadow and Brimstone and other air-to-surface weapons. These features enrich the multi-role characteristics of the aircraft and enhance the weapon system in a role in which the aircraft is excelling since 2011 with the operations over Libya and now Syria and Iraq.

This configuration foresees the integration of a new advanced laser designator pod (the Lockheed Martin Sniper) that will expand Eurofighter’s portfolio of cleared laser designator pods, the introduction of the DRS-Cubic ACMI P5 combat training pod, an enhanced navigation aid (VOR) and the E-Scan radar CAPTOR with its antenna repositioner.”

It will come as a shock to some on here that the eurofighter Typhoon is not made exclusively in the UK, given some of the recent comments about Typhoon being 100% UK whilst F35 is “only” 15% UK.

Good news for the UK and European aerospace industry and the people who work in that industry.

I was going to ask a question along those lines for the Qatar article.

How do the other nations – Germany Italy Spain benefit as the thrust of the article was that BAES had won the order?

The design itself was based on the British EAP aircraft though.

I think the component split is the same on all jets the only difference being final assembly possibly.

Dornier TFK90 design is worth researching.

I’ve not read anyone on this site suggesting Typhoon is anything other than a pan national collaboration.

Suggest you read the articles regarding UK participation in the F35 project for further details.

Has there been any confirmation that the UK will definitely order CAPTOR? I don’t think its even ordered for the Tranche 3 jets, are they going to pay for the old Radar first then even more to upgrade to the new one? It should have been on the first Tranche 3 jet leaving the factory.

The AESA radar is paid for and programmed in to the RAF’s Typhoon’s development. Before it is fitted though the aircraft must complete the Project Centurion upgrades. There are a number of Typhoons that are being used as trial aircraft with the radar already fitted, being used by BAE Systems and Airbus (Germany). Therefore, once the aircraft is officially fitted with the radar there should be very few operating issues, like with the Foxhunter when it was fitted to Tornados.

So that sounds like Kuwait has gone with RAF weapons not Italian ones?

Lee simple fact is the RAF weapons are tested in combat against ISIS, cannot say the same for Italian developed weaponry.

May 14, 2021
The Wall Street Journal has reported that "the most powerful U.K. fleet to be assembled in decades" is sailing.