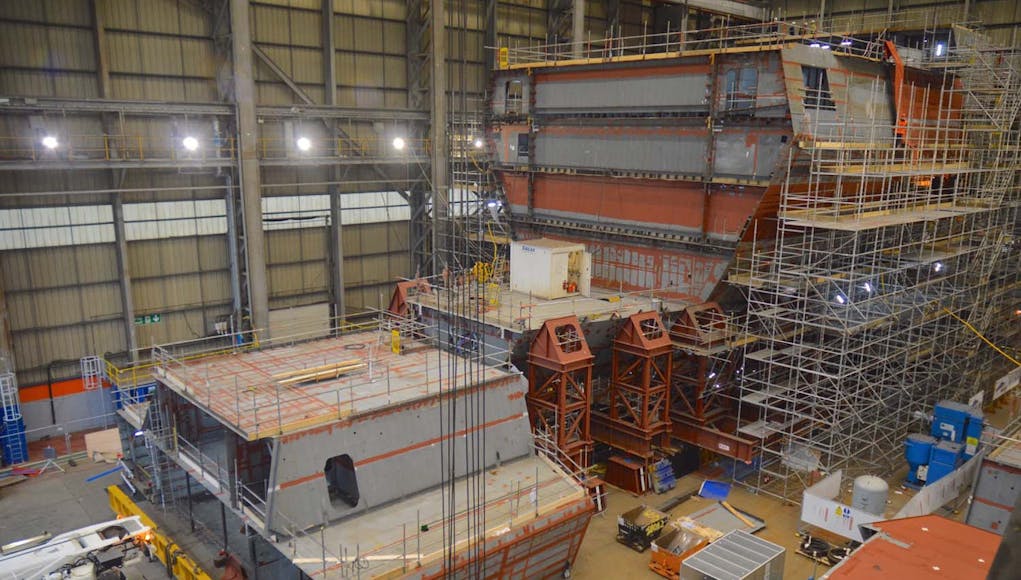 Two more sections have been completed, ready to be added to the already-joined forward segment of HMS Glasgow at BAE Systems yard in Govan, say the Royal Navy.

It is also understood that a paint scheme has been applied to units pieced together in what will eventually be “an 8,000-tonne jigsaw”.

“The fore and aft sections are being constructed in two giant halls at Govan, where the various sections are transferred after work on them is complete in the fabrication facility. In the block and outfit hall it’s the task of engineers to join the numerous sections together – including connecting all the cabling and pipework which runs through Glasgow.

Last month, the finished aft section of Glasgow was hidden beneath swathes of tarpaulin. Not so this month, where the canvas has been removed to allow you your first sight of the stern section as it stands, again with a fresh section waiting to be attached.”

The Royal Navy say in a release that once fore and aft segments are finished, they will be moved out of the sheds on huge transporters, joined, the remaining superstructure will be craned into place (such as Glasgow’s bridge and her main mast), ready for the outwardly-complete warship to be lowered into the Clyde and towed downstream to BAE’s other yard on the river at Scotstoun, where fitting out will take place.

Dear me, the MOD are desperately trying to spin that these frigates aren’t taking a VERY long time to build. All progress is welcome but the truth is it is taking far too long putting pressure on the aging T23s. The T31 programme is even worse…

Exactly, it’s hardly changed! I think it’s Only tommy dave and mike and peter at weekends that are working on this ship.

Tommy is on leave, and Peter has had a row with Mike….. progress is now very very slow. But all is well at MOD central, the worst department in the World. Can’t design a ship, can’t order it, can’t get it right, get the specs wrong, ships don’t work, can’t run in the heat, needs hundreds of millions to rebuild, woefully overpriced, massively under-equipped, yet its everyone elses fault…. the UK MOD, fit for nothing…..

From Your negativity, as first time use of this persona
on this forum, it seems you were Banned in your previous Guise. Am I right?

Is it negative to tell the truth, there are so many examples, people have stopped counting. There are 56,000 people in the MOD, the cost of problems, poor design, poor planning, bad purchases, delays is incredible. This runs into multi-billions of pounds. This is not just about the 56,000, its the people running it, the continuing distraction and unjoined up nature of competition which leads to poor decision making. All of the services are guilty, and of course the politicians who are ultimately responsible, but they are amateurs.

My other login seems to work as well – so not previously banned – you might be confusing me with someone else. I am massively pro-defence, hope and pray that this review yields a medium term aspiration to get spending incrementally back to around 3.5% of GDP – but Defence must stop scoring such massive own goals. There are plenty of anti-defence idiots out there, and we are giving them free bullets to fire with short term thinking and planning – projects that are not lifetime planned and budgeted. Best regards to you and all the contributors on this excellent… Read more »

I do Agree with Your post.
Mistakes have been made!
And Procurement timelines been done Wrong.

My apologies, of my assumptions of Your previous post!

I would say, George Robertson(now Lord of Port Ellen), was the last DS to get
procurement mostly right, in the 1998 SDSR.
His successors have made mistakes!

As I recall I’ve yet to see a photo of anyone working on Glasgow. I’m thinking its a probably a Virtual Frigate all done with mirrors or some new fangled cypto-science.

If the ageing American navy AB ships can survive then so can the T23s. Pottering round the gulf is not going to strain them, as opposed to the South Atlantic. What does seem to be coming clear is that using powerful anti submarine frigates and dedicated anti aircraft destroyers in places like the gulf is overkill. The RN is not structured for its purpose. Relatively we need more of the more simple T31. Likewise may I suggest that when the time comes we should have larger replacements for the T45 (only 3 or 4), a small versatile ‘through deck cruiser’… Read more »

A T45 was sent to the Gulf due to high tension at the time, to supplement a lone T23(GP) escorting shipping through the Gulf. The escort was at high risk from shore based cruise missile batteries, and as well, from armed IRGC patrol boats.
A British vessel was taken hostage before the arrival of the T45.

Trevor – I’m more inclined now to go the other way,design and build a Single Class of Escort Ship that is competent in ASW and AAW that can be produced in high volume with economies of scale rather than the ‘Gold Plated’ if you like policy now of building specialised Ships in too few numbers with the associated high costs.To me the T45 and T26 are sufficient in size,even going down to a 5000-6000 tonne Hull would be good enough.

A GP hull of only 5000 tons would Not be able to take a Sampson radar, which are best for detecting sea skimming missiles. In Producing a single class, it would be the issue of combining all necessary equipment for ASW and AAW on one Hull, a very big hull indeed!
The RN would be looking at a Zumwalt size like hull for this to happen!

Surely Sampson represents High End Capability,over time it should evolve into a smaller package as Electronic technology advances.The same should apply to Sonar technology, the need for larger Ships should be reduced.My point was there are alternatives to Gold Plated solutions when slightly less capability can be sought which can then be bought in higher numbers.

Marine radar systems tend to be large because a lot of energy is required to transmit a radar signal over a distance, and to detect the returning signal, also taking into account of losses of signal energy from water vapour etc.

1st rate Warships are only going to get larger when technologies like Lasers and Rail Guns are introduced, and to generated the energy required for their use.

I agree a 1st Rate Blue Water Navy requires 1st Rate Capabilities and Technologies,but it also requires a 1st Rate Budget,one that is affordable and sustainable – that’s the problem.

I do agree, that a Navy’s 2nd rate warships do not require the capabilities as the 1st rate warships require, e.g Type 31, but they do need to be able to defend themselves.

Unfortunately the laws of physics preclude shrinking the top of the mast sampson fit if you want to retain the capability. It has active transmit/receive modules and two radar faces. Both need to be the size they are to do all of the air search , surface search and missile data link work. A four sides fixed panel may be a possibility but it does have disadvantages against a rotating fit. Dont forget the cooling requirements either. modern electronics are small and power dense. Unless they have a cooling system , be that chilled water or cold air blast, they… Read more »

Looking at the French FTI/Belharra Frigate design,they are to be equipped with the new Thales Sea Fire Radar System with a stated range for Air Search of 500km vs 400km for Sampson (give or take OPSEC issues) on a Hull circa 4250 Tonnes.

Air search means the radar is pointed to high altitude direction. This new type of radar would still need to be raised above the ground/sea to detect on the horizon threats, e.g 30m Hight to detect out to 19.5km.

I see Now that the T45 has just been withdrawn.
Just a lone T23(GP) to provide escorts for British shipping in the Gulf again.
So back to Square One again!
Another Misguided decision made by politicians!

There is now a coalition of nations escorting vessels in the straights irrespective of the commercial vessels nationality.

Its not just the T23 doing escorting but also the other RN assets that are in theatre. To assist the surface units there is now a substantial multi national air cover presence providing top cover and is loaded for bear especially small boat swarm attacking bears!

Thanks for that info. Gunbuster!
I do remember now, that Japan’s Navy sent a warship to the Gulf with controversies, a few weeks ago.
And did the RAN sent a Hobart there recently?

The illusory Peace Dividend did not help in forward planning; running down industrial capacity, lack of decisive direction from the top and the wholly disastrous management of the national finances (the national debt actually increased in Austerity Mk II) Coalition have a lot to answer for. Fortunately, the opposition are either bankrupt or need the western world’s I.O.U.’s honoured to prop up their own economies. We will get there, but it won’t be elegant.

I hope these ships get a darker grey, they look far better.

Also when you see that guy on the scaffolding just shows the size of these frigates, big girls.

Cam – yes they will be Large Frigates indeed,there was a pic on STRN of a T45 berthed next to an ex – RN T22,the difference in size was quite striking.

Could this be MBDA’s new anti-ship missile under construction for them?
Should fit comfortably.

No doubt Nigel “fitted for, not with”. We all agree with AndyB’s comments re the MOD. Pi** up and brewery come to mind.

All of the posts are have some merit, with out the personnel to crew the ships however, any platform (regardless of type/specialisation/cost) can’t go to sea.