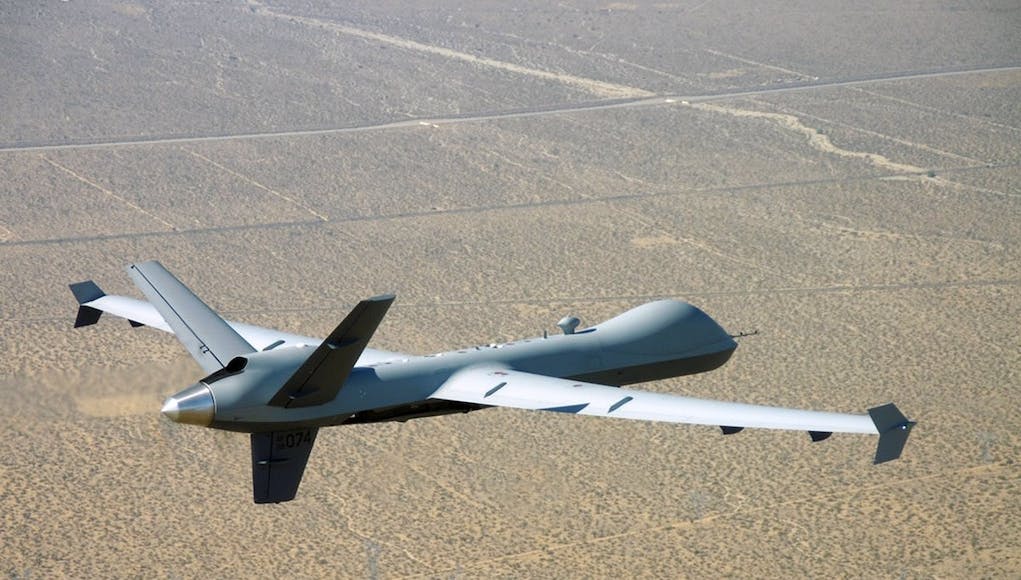 The Ministry of Defence have now confirmed that Protector will be a derivative of the MQ-9 Reaper.

The Protector programme will see the UK acquire at least 20 Remotely Piloted Air Systems to replace Reaper and has taken the place of the RAF’s Scavenger programme.

As reported here by Flight Global, Air Cdre Peter Grinstead, head of UK unmanned air systems at the MoD confirmed at the Royal Aeronautical Society’s president’s conference that Protector will be a new version of the Reaper:

“The programme we are running… a decision will not be made until March,” he says. “It will be an upgrade of the Reaper Block 1 with extra capability.”

Flight Global add that more details are at the Main Gate decision in March.

The UK currently operates the MQ-9 Reaper, it is an unmanned aerial vehicle developed by General Atomics. The MQ-9 is referred to by the RAF as a Remotely Piloted Air System to indicate their human ground controllers. It is armed with Hellfire missiles.

According to Justin Bronk, as quoted by the FT:

“Reaper offers much greater persistence over potential targets than fast jets like Tornado. They are better suited to maintaining observation over known combat zones where no pre-identified fixed targets exist and they offer more time over target to ensure targets are correctly identified. Pilots can talk about the picture in front of them with intelligence and even legal personnel face to face before striking, which is impossible in a fast jet.”

In October last year, the Ministry of Defence announced the deployment of Reapers in Operation Shader, the first occasion the UK used its Reapers outside of Afghanistan. The number of aircraft wasn’t disclosed at the time but it’s expected that more were moved to the Middle East as the UK withdrew them from Afghanistan. Their primary purpose is to provide surveillance support and situational awareness to coalition forces.

UK Reaper’s were at first flown from Creech in Nevada, but since 2013 they have been flown from RAF Waddington by 13 and 39 Squadrons.

20 would be enough, going by the USAF CONOPS, to provide a rotation of 5 combat air patrols. What’s needed is CAA approval to fly in UK airspace: then we could see the mission set expand to supplement maritime patrol and SAR operations. I think we should be buying at least 50, and establishing ourselves as the premier unmanned aircraft operator in Europe. Perhaps MoD are waiting on the Taranis trials before deciding on a next-gen UCAV that can operate in a contested environment. Reapers are all fine and dandy when there is no one shooting back.

Thankfully the UK has opted for the low risk option this time, 20 is more than adequate for our needs. For once the MOD gets a procurement decision right.