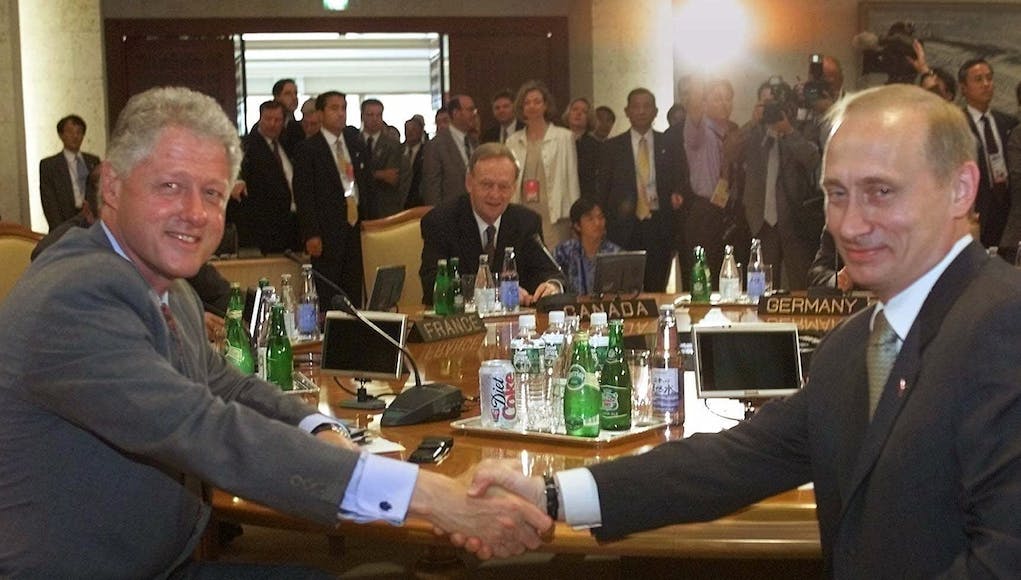 Moscow, 2000: Russia and NATO, usually these two words don’t generally imply an alliance however back in 2000, the idea was floated.

Currently Vladimir Putin is being interviewed with American film maker Oliver Stone for a documentary on him and according to an excerpt of the interview the Russian President said that early on in his tenure as Russian President he floated that idea of Russia joining NATO.

The history of NATO was that is was established to order to counter the expansion of communism in eastern Europe and dampen the expansion of the USSR. Ten years later and after the fall of the Soviet Union, a Russian President considered the prospects of the old communist state joining the long term adversary.

The comment was made during a state visit by then US President Bill Clinton to Moscow; at the time Putin said to Clinton “Let’s consider an option that Russia might join NATO?” which was met with a warm reaction from the US President but not from the US delegation that was present. Putin hadn’t be opposed to Russia joining the alliance before the June 2000 visit.

Despite the interest in joining the alliance, the Russian President has criticised the alliance for expanding eastwards towards the Russian border and has described Russia under his leadership as seeking to improve its relationship or status quo with the United States however finding themselves frustrated by Washington’s ‘imperialist mentality’.

Time however will tell; the Russian President currently has an American President that is warm to improve relations however the two have yet to meet in person which could potentially happen in the near future.

Anyone been watching The Putin Interviews?

To Put,in it gently was he “extracting the urine.”

Russia cant spend big on defence ? It could steamroll the EU in a few weeks.

Steven: I don’t really believe that. I think thats just Russia’s propoganda machine working! Russia Has no chance whatsoever against NATO and I think Putin knows that. Yes, maybe they would make some gains rapidly but it would be destroyed in its tracks!

Bull shit what with a load of dated Russian weapons

I would have welcomed this.

Me too, I’ve mentioned it on here before, it’s been on the NATO wikipedia page for ages as well, although I think it’s a defence minister or something talking about Russia joining NATO.

Would of more or less put the lid on over 2000 years of European conflict and rivalry, it’s a shame it was not a European country at the head of NATO, probably would of happened.

Despite whether Putin is a SOB or not, I like the Russian people myself and I sympathise with their paranoia due to NATOs constant eastward expansion to Russia’s borders, and the hypocrisy of the west in general.

And being well read on the Great Patriotic War I know what they went through, what Germany did and how they are forever mistrustful after while being surrounded by US bases.

Might not be a popular view on here and I understand NATOs concern at Russian behaviour and the likelihood of Russian involvement with the Salisbury business.

Wow. Never mind Russia invaded Poland and Finland before ww2, and was in a military alliance with nazi Germany to dismember Poland before it was invaded. Let’s also skip past the horrors it inflicted on its empire or more recent invasions of Georgia and Ukraine. NATO isn’t some greedy empire snapping up East European states. The independent and sovereign states of Eastern Europe chose to join NATO because it was in their own national interest.

Anthony,
Whilst you are correct in pointing out what Russia got up to before Hitler invaded. Daniele did state:
“Russian people”
and not the Russia political elite.

However that said, since 2000 Putin has built up a cult around him and that has resulted in a huge polarization of a lot of Russian peoples towards a very myopic , bigoted and Xenophobic nationalistic mindset. As seen in Nazi Germany and Imperial Japan, (and of late in China) that isn’t a good thing.

I agree with all of that, to your surprise no doubt. Read my piece again. I understand their view. There are always two views whether one likes it or not. Where did I say NATO is a greedy empire? I said I see the Russian viewpoint as it creeps eastward which the west said in 1991 it would not. NATO is the bastion of European security, I’m all for it. I’m totally against the EU and the EU Army being planned. You didn’t mention my comment on western hypocrisy. Good job too as I could really go to town there.… Read more »

Russia and Germany signed the Non Aggression pact as a means to give each time to prepare for the coming war.

We chose to appease when the Nazi’s annexed Czechoslovakia and marched into the Rhineland. Was that to give time or equally underhand?

And just to correct Russia attacked Poland once World War 2 was underway.

Don’t forget Katyn too. Terrible behaviour by Beria, the NKVD and Stalin. I still stand by my comment that I understand the Russian point of view concerning NATO and the west.

NATO is America’s Trojan horse, it is not benign or primarily about keeping Europe safe. It is a tool with which the US manipulates European governments.

So are we supposed to ignore Poland attacking Russia in the middle of a civil war, and western blockade to take advantage of Russian vulnerabilities. Then seizing territory beyond the Curzon Line, overall not exactly a endearing series of events to the Soviets. What would you have expected that ,“paragon of forgiveness among men”, Stalin to do? Give them a hug and tell them,” It’s all going to be okay comrades.” Russia has been attacked at different times by the following European countries Britain, France, Germany, Austria, Poland, Sweden, and Turkey. Note not the United States. The EU and NATO… Read more »

Daniele. 1939 wasn’t the first time the Soviet union went to war with Poland.

Daniele. In addition the Soviets did not sign the pact to prepare for war. Stalin perged the red army and refused I believe her had betrayed him when Germany invaded. It also supplied Germany with raw materials during that time.

Agreed on some of that Anthony. One train even crossed the border on the eve of Barbarossa! And a German train heading the other way carried Brandenburg commandos.

I myself do believe the pact gave both sides time. Stalins purge of the red army was at its height a few years before. He then bought Marshal Zhukov back from the far East when the danger from Germany became apparent.

The Germans were suspicious of Soviet intentions with regards to the Ploesti oilfields in Romania, and, sure enough, most of the Soviet armoured formations were concentrated there.

According to the Neville Chamberlain letters, his aims at getting appeasement from Hitler was to buy time. Most of Europe and the UK were coming out of the “Great Depression” and were in no position to counter Germany industrially or militarily. Our forces were still geared for policing the Empire not fighting another WW1 scenario. If you look at the equipment of the BEF (1935 – 1939) most of it dated to the late 20’s to early 30’s. The Airforce was also not in a great place, only the Navy’s ships were mostly up to date, their FAA aircraft were… Read more »

Daniele. sorry Hitler not her.

Daniele. The point I’m trying to make is that it’s not up to the west or Russia what independent sovereign states in eastern Europe decide to do. It’s not a conspiracy. NATO isn’t creeping eastwards. Countries are free to apply to join. Yet whenever new countries consider this Russia threatens some and invades others. Paranoia, history and hypocrisy doesn’t excuse this behaviour.

Agreed. My point was it’s impact on western Russian relations. I’d also suggest Cuba had a choice to decide and look how that went down with the USA with a potential enemy on their doorstep.

And the very generous incentives the US offers plays no part in the decision to apply to join ?

Seems more like April the 1st or reminiscient of the old TV series “Whoops Apocalypse!”

It’s all water under the bridge now we’ve seen Putin become the Godfather of gangster government in Russia. Both the US & Russia are paranoid. It remains to be seen if Trump is any better.

Oh f*** off with that. President Trump has bombed Syria twice and approved aid to the Ukraine. This in addition to increasing sanctions on Russia more than ANY other country. While also increasing the number of US forces deployed to Europe.
What more would you like him to do? Nuke Damascus? Moscow? It’s pretty damn rich hearing criticism of the leadership of the US when Mrs. May managed to blow probably one of the easiest elections I have ever seen, against an opponent who is an admitted Marxist.

Hi Elliott, nukeing anyone would be the act of a madman. It remains to be seen if bombing as a deterrent against further use of chemical weapons will work this time after it hadn’t before. Sorry , I’m no fan of Trump, he’s too immature & bullying to be a serious politician. Yes he’s done a few good things, though the list of disturbing things he’s said or done is staggering. I’m just hoping he doesn’t create an authoritarian USA. I’ve never been tempted to vote Tory but I’ll give Theresa May one thing: She’s not Cameron or Osbourne, which… Read more »

If Russia were ever to join, what would be the point of NATO?

Then maybe Putin made a big mistake?

Ron5
Everyone is entitled to an opinion. Bombastic comments are as bad as silly statements.

There had been a brief amount of reporting about that at the time. It was a gambit to get a temporarily under-powered fox into a henhouse.