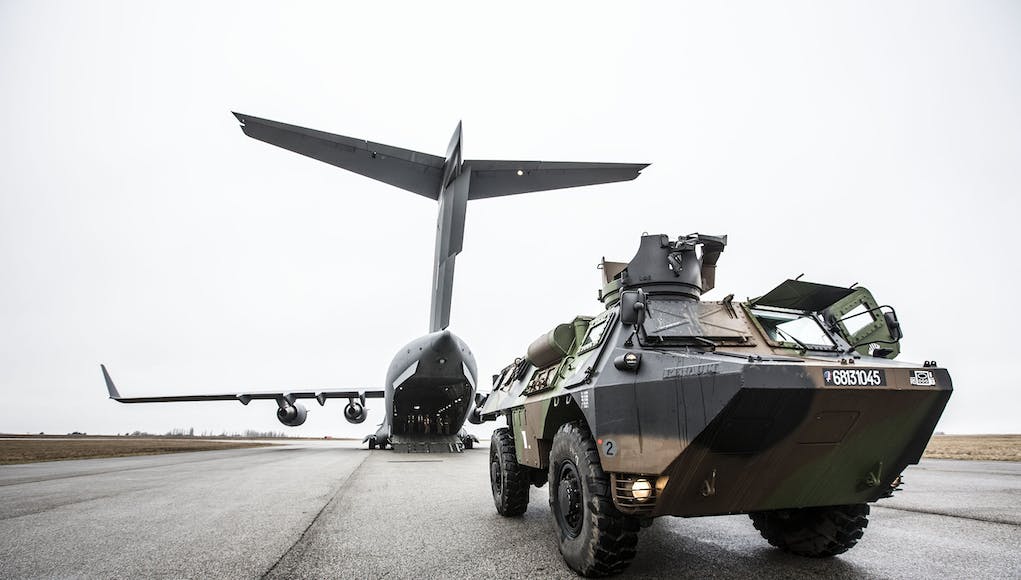 The RAF have been assisting French troops in sub-Saharan Africa by delivering supplies to the Op Barkhane counter-insurgency efforts in Niger via C-17 Globemasters.

According to a media release issued by the Royal Air Force, the aircraft delivered several pallets of cargo to Niamey airport in Niger over the weekend, helping to keep the 3,000 strong French forces supplied during their on-going efforts against Islamist insurgents.

Op Barkhane is a long-running French anti-insurgent operation that started in August 2014 with the aim of assisting the African G5 nations against terrorist organisations including Al-Mourabitoun, AQIM and Ansar Dine.

In March 2016, during the UK-France Summit in Paris, Defence Secretary Michael Fallon announced the provision of monthly strategic airlift support in the form of C17 flights picking up freight from France and delivering it to the sub-Saharan region.

The French force in Africa consists of around 4,000 troops operating alongside 200 armoured vehicles, 20 helicopters, 6 fighter planes and 3 drones as well as logistical supply in-theatre being provided by two German C-160s.

The main focus is in Mali, Chad, Niger and the Ivory Coast with some special forces in Burkina Faso with operations across the region being coordinated from N’Djamena and Niamey for supply and intelligence purposes.

“The fight against violent extremist organisations is an on-going effort that will require global collaboration if we are to succeed.”

Op Barkhane is a prime example of two allied countries providing resources to maximum effect in the support of our allies in Africa through a mixture of medical, diplomatic, economic and military assistance.”

“The Op Barkhane tasking is tremendously important and highlights the importance of the RAF’s strategic heavy lift capabilities on a global scale. Working alongside the French on bilateral logistic capabilities reinforces the strong relationship we enjoy with them.

It is extremely rewarding for us as operators and we continue to support our allies in this critical mission against sub-Saharan insurgency.”

I am a bit surprised the French still have to rely on RAF heavy lift aircraft to transport equipment.
Perhaps they should have invested in more substantial aircraft of their own and then they wouldn’t have to depend on British planes.

Haven’t the French just received multiple A400s??? Still, this is all in the name of ‘burden sharing’ against Islamic terrorism so I suppose it’s ok… better French troops on the ground than ours.

A good example of why an EU armed forces will not work. Too many capability gaps within our EU allies. France is the 2nd most powerful EU nation militarily after the UK yet has no strategic airlift ability. Unless EU nations are going to spend more of their substantial wealth on defence and plugging their capability gaps they will always need uk support. agree better French troops on the ground fighting insurgents than British army. Although Mali is an ex French protectorate and thus France probably has a binding commitment to ensuring its sovereignty. UK should not get involved too… Read more »

The EU is starting to put a common fleet together….
Introducing the little known European Air Transport Command, which will control quite a large and growing military airlift fleet

(they keep pretending they aren’t militarising despite all evidence to the contrary…. NATO won’t survive a competing military bureaucracy that the EU is becoming)

Its just yet another classic example of the inching forward of the European Superstate project which started with the Lisbon Treaty and which, thankfully, we have now decided to leave. What was a straightforward mutual trading arrangement amongst 10 similar countries has now become a 28 Nation, Lawmaking, Policed, Anthem singing, Flag waving, Parliament voting, Currency creating and unelected Commisson led monstrosity. If it is just about trade why all this other stuff? Oh and 5 Presidents not one of whom is elected? You can understand the USA getting a tad hacked off with EU nations who seem to be… Read more »

I really don’t see why we can’t have a common support fleet with some European countries. We could have a combined tanker and transport fleet.

Fight Against Terrorism In Africa, Are the Westerners Really Helping - Listwand

[…] the spring of 2016, the United Kingdom has been delivering supplies from France to Niger to support Operation Barkhane while Germany was given […]

[…] the spring of 2016, the UK has been delivering supplies from France to Niger to support Operation Barkhane while Germany was given authorization to build a rear […]