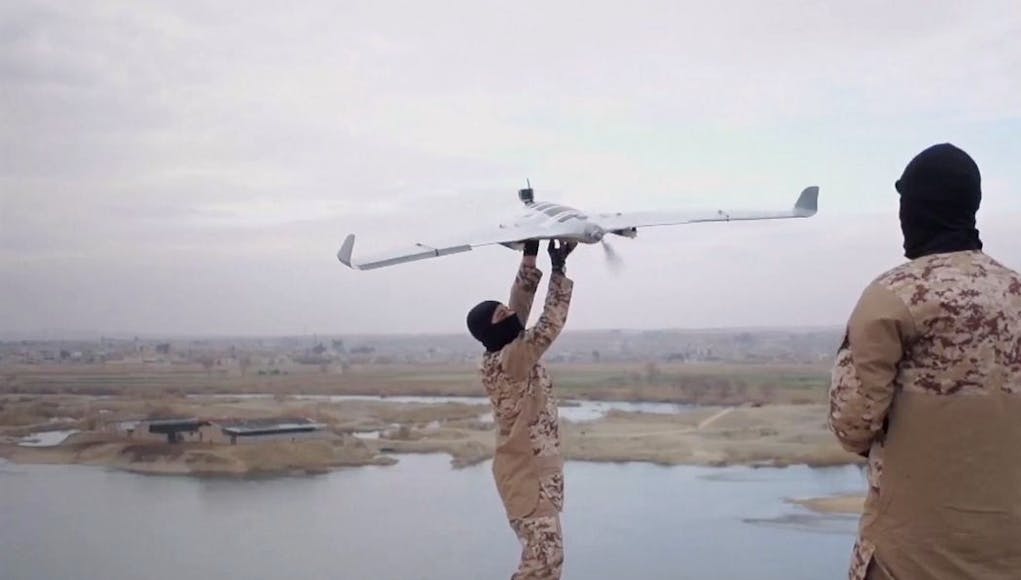 The drone landscape has unquestionably altered over recent years.

James Rogers is Assistant Professor in War Studies at the University of Southern Denmark and Visiting Research Fellow within the Department of International Security Studies at Yale University. Twitter @DrJamesRogers

The United States and its allies, once the purveyors of ‘pin-point’ precision and remote wars, have been joined by a plethora of insurgent and terroristic actors who use drones in novel and sometimes deadly ways. As a result, a new pattern of drone warfare has emerged. These wars often involve smaller improvised and adapted commercial drone technologies. The drones are used for surveillance and the coordination of attack, but also the rudimentary bombardment of those deemed hostile to the cause. Increasingly, however, these new drone conflicts have taken on a deadlier form. Calculating state actors now supply advanced drone systems – capable of long-range, high speed, air burst, and multiple deployment – to proxies, partners, and surrogates who do their bidding for them and add to the chaos of conflict.

As the International Defence Industry Fair (IDIF) got underway in Istanbul last week, it was clear to see that one point of interest was this rising threat of terrorist and insurgent drones. The Turkish company Aselsan led the way with Turkish government funded projects, like the IHASAVAR anti-drone gun and more substantial iHTAR integrated counter-drone system. This focus is not surprising. Turkey has long suffered from the threat of hostile drones. Yet, Turkey is far from alone when it comes to non-state drone attacks. If we take even a cursory glance at the recent history, we see just how deadly and effective remote-control warfare by non-state actors has become.

We need only think back to the use of drones by Hamas and Hezbollah, present and deadly for over a decade, for pertinent examples of what weaponised unmanned systems have done in the Middle East. In 2006, Hezbollah successfully flew an armed kamikaze drone into an Israeli warship, setting it ablaze and leaving four sailors missing. According to the Centre for the Study of the Drone, the technology behind such attacks was originally supplied by Iran. In fact, since the Iran-Iraq War in the 1980s, Iran has ‘maintained an active drone program’, allowing it to launch its own armed drone strikes, but also to supply advanced technical capabilities to a growing list of non-state clients.

Joining Hamas and Hezbollah on the Iranian client list are the Houthi rebels in Yemen. According to Nick Waters at Bellingcat, Iran has been supplying the Houthis with variants of the Iranian designed Ababil II family of drones. Two of these drone systems, named the Qasef 1 and Qasef 2K, are able to be used at range, can be packed with explosive and fragmentation munitions, and have the ability to be launched at a pre-set target via GPS. In a recent attack, these drones were used in an assassination capacity, with the drone traveling at high-speed and detonating just meters above a gathering of high-ranking Yemeni military official during a parade at Al Anad military base in the south-west of Yemen. Six people were reportedly killed in this attack, including the deputy chief of staff of the Yemini Army. Twice as many people were injured. If we add to this the recent sophisticated Houthi drone attack on a Saudi Aramco oil refinery just outside the capital Riyadh, or the alleged drone strikes on Abu Dhabi International Airport in July 2018, then we can begin to paint a valid picture of just how deadly and threatening these once simple remote systems have become.

To be clear, the use of more advanced state supplied military drone systems by non-state actors marks a sea-change in the ‘drone game’. No longer is it just low-tech, slow, hobbyist drones that are being converted and used as effective weapons. Instead, more sophisticated, high-speed, longer range, airburst systems are being supplied by state actors. This reflects an increasing dependence on remote warfare to generate the unstable conditions that non-state actors thrive upon. It is also no coincidence that the three prime examples, Hamas, Hezbollah and the Houthis, depend heavily on weapons supplies from Iran, who view such an approach as an effective way to spread their influence (and chaos) across the region.

With this in mind, it looks as if the non-state drone threat is increasing. Indeed, if the counter-drone focus at IDIF, and the increased Houthi use of drones, are anything to go by, then global policy makers would do well to take this threat seriously. Put simply, remote warfare tactics by non-state groups are impacting stability in the Middle East, but also the ability of national militaries, including the West and its allies, to bring conflicts to a rapid and satisfactory conclusion without high-cost and prolonged bloodied warfare.

“”In 2006, Hezbollah successfully flew an armed kamikaze drone into an Israeli warship, setting it ablaze and leaving four sailors missing. “” The above statement is incorrect. On the 14th July 2006, during the 2006 Lebanon War, The INS Hanit was struck by a Hezbollah C-802 anti-ship missile. (or the Iranian reverse engineered version called the Noor) resulting in damage and the lost of 4 men. The missile defence systems had been turned off by the 2 ice scream, but enough warning was still given to afford the rear of the ship as a target (The same maneuver I believe… Read more »

Sounds like there is a good export market we could exploit!

They say desperation breeds innovation! I think this statement is true, as the conflict in Syria has shown how off the shelf commercial drones or toys can be weaponised with little cost but reap satisfactory rewards. There are two attacks using drones that come to mind. The conversion of a quadcopter to deliver grenades and mortar shells and the conversion of radio controlled planes into cheap guided weapons. By using a piece of bent wire with a loop in the end as a reticule mounted in line with a weapon delivery tube. Allows the “pilot” to use the drone’s camera… Read more »