RFA Cardigan Bay has been acting as a mothership for British and American minehunters operating in the Middle East.

RFA Cardigan Bay will be replacd in the region by RFA Lyme Bay.

The Royal Navy say here that the vessel acts as command ship and hub for the UK’s four Bahrain-based minehunters, but also serves as a floating base for specialist dive teams and experts testing automated mine warfare systems, helicopters moving personnel and supplies around the region, and as a ‘petrol station’ and supermarket for the minehunters.

“Her ability to hold enough fuel to fill up multiple ships at a time, as well as approximately 200 tonnes of provisions means that minehunters – which typically have a fairly limited range and endurance due to their size – can remain on operations for extended periods. As a result, she’s been heavily in demand since arriving in theatre in 2017 – the second time in the past decade Cardigan Bay was deployed to the Gulf to support minehunters.

She’s taken part in numerous regular MINEXs (combined Anglo-American workouts for their mine warfare forces based in the Gulf), large International Maritime Exercises focused on wider security in Middle East waters, and four Khunjar Haad exercises – the principal annual test of Oman’s armed forces to which her allies are invited. Most recently, Cardigan Bay was at the hub of the Anglo-French-US Artemis Trident, run every two years. Beyond the usual minehunting element, exercise directors threw in a series of self-defence tests against air and surface threats, maritime security, force protection and diving operations.

RFA Cardigan Bay was critical to the success of the large-scale exercise, transferring fresh water, fuel and stores for Royal Navy and coalition ships as they ‘rafted up’ – berthed – alongside the ship in the middle of the Gulf.”

RFA Cardigan Bay will undergo extensive maintenance and refurbishment on her return to the UK, say the Royal Navy.

An interesting piece. I didn’t realize that these effectively acted as MCM motherships. Presumably that role will continue when the Sandowns/Hunts are replaced by autonomous vessels, and the MRSS will eventually replace the Bays.

With Argus going soon, one of the three Bays covering the Caribbean storm season, and one being converted for littoral strike, aren’t they looking a little overloaded for the next decade? Do we know when the first MRSS ships will be ordered/delivered? Will this be at a leisurely pace like the FSSS?

As posted
today, looks as if Wave Knight has taken on the Caribbean hurricane season role this year…….

As Cardigan Bay is heading into refit, I wonder if she’s the selected vessel for Littoral strike refit?

If so, will she be transferred to the RN?

Hard to justify RFA status when she’s going to be a dedicated RM / Spec ops platform.

An interesting take on it John, yeah, the change in role might prompt a change in ‘dusters’. Might allow a bit more ‘oomph’ on the weapons fit if its deemed necessary.

RFA status if financially far cheaper to operate than RN status. She will stay RFA.

Hi Gents
I wonder if their Admiralty Lordships might consider converting one of the Bays as a replacement for RFA Argus? I imagine it would be an affordable option. Plenty of flight deck and the well are could be converted to a hangar.

Mothership? Possibly I am miss understanding the term. RFA Cardigan Bay has been operating more as a Depot ship for my understanding a mothership has remote operational units controlled by a mothership, a depot ship looks after smaller vessels with supplies, small repairs and a possible relaxation area for the crews of small vessels, these types of relaxation areas also include laundry areas, a bath (I know), a NAAFI pub, etc. As yet as far as I am aware no navy in the world has a mothership. Yet I can see the reason for having true motherships in the future,… Read more »

Mother ship , Depot ship, Airport …A bit of everything. With the MCMV Command Group embarked onboard she controls the MCMV units assigned to a task. She is limited on the repairs she can do…that’s managed by the FSU based in Bahrain who can fly items out to the Bay for onward transport to ships or if they have staff on the Bay along with the workshop containers, can conduct assisted repairs. Bars and laundry…MCMs have all that anyway so no need to go elsewhere. In these COVID bubbled up times its a non starter anyway. Bays do have a… Read more »

These ships have been great value for money and are worked really hard.

Will be interesting to see what replaces these, Argus and the albion class

Very hard to look paste Karel doorman class in my view, as it just offers so much flexibility, obviously more costly than the bays, but almost anyth8ng will be.

The navy certainly seem to me to have a far better understanding o& what they need/want and have a good track record of delivery when left to it. These are a good example of that.

Why is the CIWS fitted aft in that pic? Isn’t it usually forward near the bow?

They have 2. One high aft on the accom block house and one in front of the bridge on the focsle.
Then the usual 30mm port and stbd and FP guns around the upper deck.

Thank you. I just found some more images and it appears that both the 30mm guns are in their original mounts on top of the main block house. But both CIWS are no longer fitted forward of the bridge and aft on top of the block house, like you mentioned. But are now fitted port side and starboard side on the lower deck near the hangar. Wonder why they opted for that relocation? Better line of sight perhaps?

I was on a Bay this morning at 0615 local and I can confirm the mounts are positioned as I said on the Focsle and Accom block.

I was referring to just Cardigan Bay but it seems she may have had them refitted to the original positions as you stated. But they weren’t always that way as the attached image shows. 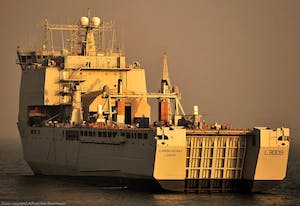 Oooooh…thats an old picture.
There have been a number of changes to the Upper deck equipment since then. Ras High points fitted where the Phalanx are positioned in the picture. In this pic there are domes on the flight deck lighting A frame. They where for Scan Eagle drone system which has been out of service for some time. Also the HF aerial fit has changed since this was taken.

Glad she’s home. She has been worked hard out here and has given sterling service to all of the naval units she has worked with.

I have done a lot of work on her over the time she has been out here. All the usual ship repair stuff that needs doing. Pipework renewal, electrical, mechanical and habitability defect repairs, , support to UK specialists, steel repairs, painting.
I am now doing a maintenance period on her replacement before she starts her tasking in earnest for the next year or so.