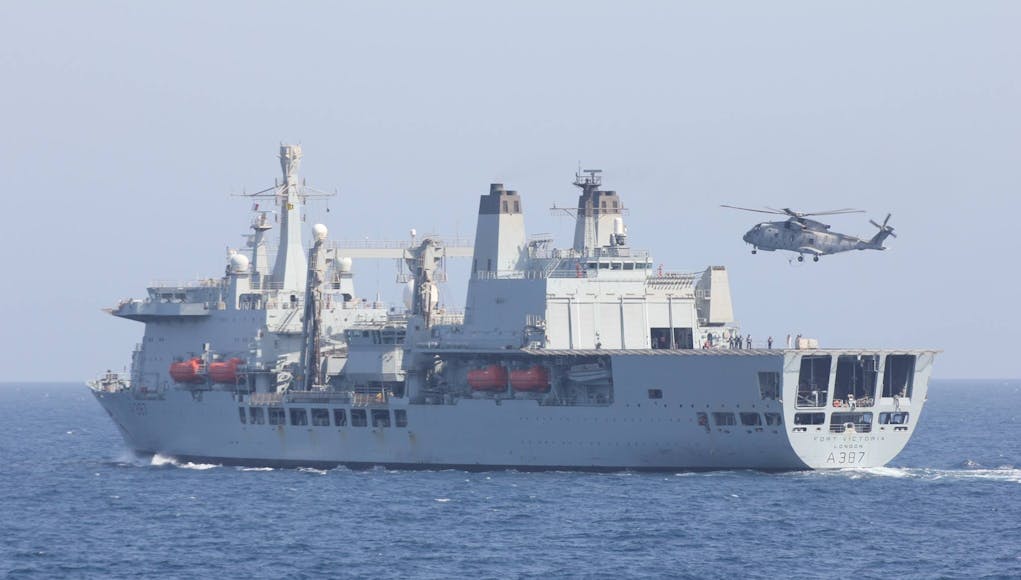 One of the Royal Fleet Auxiliary’s largest vessels, the combined fleet stores ship, RFA Fort Victoria has begun its latest refit in Merseyside.

The refit will be conducted by Cammell Laird supported by a number of local and national contractors including interior specialists Trimline Ltd. of Southampton. This is the third refit in a row for this vessel to be led by Cammell Laird, the last occurring three years ago. The main highlight of the refit will be the installation of a double-hull which will improve her international compliance and upgrades to allow her to better replenish and support the new Queen Elizabeth class carriers. These upgrades continue plans to keep the vessel in service until the late 2020s.

Fort Victoria has been in service since 1994, infamously having a delayed entry to service after she was the subject of an IRA bombing while under construction at Harland & Wolff in Belfast. Her operational history includes involvement in Operation Telic, the conflict in Lebanon and numerous deployments supporting multinational operations East of Suez around Yemen, Somalia and in the Indian Ocean. At over thirty-one thousand tonnes in displacement she has been one of the largest vessels in the fleet, though is surpassed by the new Tide class vessels.

Fort Victoria returned to the UK in July of last year following an extensive 26-month deployment on operations in the Aegean and East of Suez. This deployment reflected the versatility of the vessel as it fulfilled a wide variety of missions including humanitarian relief to migrants, multinational command and control duties as flagship and her conventional refuelling and replenishment role for British and allied vessels.

This latest contract represents a continuation of the strong revival Cammell Laird has experienced over the past decade. As well as conducting a number of refits of RFA vessels the shipyard is also leading the construction of the new polar research vessel RRS Sir David Attenborough and has recently joined a consortium with BAE Systems to bid for the Type 31e Frigate contract.

Installation of a double hull?

That’s more like a rebuilding than a refit surely?

It’s not a small job. I’m assuming the double hull will only be fitted midships where the cargo tanks are. It does mean a significant loss of liqid cargo capacity, and it wasn’t that large to begin with.
It would be interesting to compare the projected cost of upgrade vs replacement and the running costs of the two.

Great to see the Scousers seeing some of the benefits of our defence budget being spent there. Well done them …

As a man on the Mersey that is exactly what I wanted to say (but was too gutless to shout it first).

Is this the consolation prize for when the FSS order goes to South Korea?

Far from it I would think. This is the build-up to a UK consortia building them, as unless they are being built for a huge subsidised price given by the S Korean Government or by their own internal mean in that company and the price is stupidly low and a rat would be smelt. the best value for the taxpayer and exchequer is for them to be built here with all the positives that involve. The excuse and lie of no capacity, no UK bidder, we don’t build them (do SK build loads of them then?) as we don’t build… Read more »

Let’s hope you are right.

I am positive about it. There would clearly be no real National Shipbuilding Strategy and overall Industrial Strategy otherwise if they were given abroad.

May I add. If this is or becomes a farce of a strategy, it means it is a strategy to benefit foreign rivals who are most likely not as good or potentially we are far better but cannot invest to show this. If this happens, it becomes or needs to be re-named an International Industrial Strategy and International Shipbuilding Strategy.

The government will need some creative face saving help with the requirements and design for the FSS ships in order to avoid an embarrassing u-turn on the current NSS. A couple of like for like replacements for Fort Rosalie and Austin would surely go to S.Korea. Karel Doorman style designs would be nice.

These three ships are being designed to work with the carriers, I’m sure there have been a number of design studies. But having them built in S.Korea will not save any money and only deteriorate UK shipbuilding further. This rule is a eu directive the UK government follows (and even feels compelled unlike other member Countries) but uses many excuses as to why those tankers were built in S.Korea. It will not wash any longer.

Because I have given a link so will not be posted, I will say read Civitas Catch 22 which at the bottom leads to Ideas for growth5.pdf

Sorry to say but Fort Victoria has been in refit in Cammell Lairds since September 2017!

It a long refit.