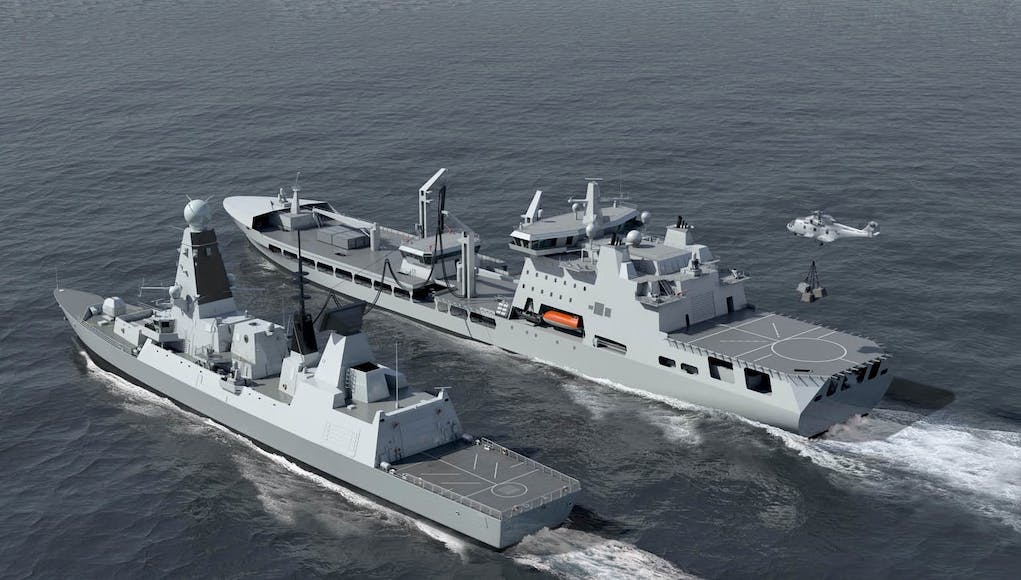 The new tanker was unveiled in a ceremony at Daewoo Shipbuilding and Marine Engineering in South Korea.

“With the naming of RFA Tiderace, the Royal Navy looks forward to another new arrival into our future fleet.

The Tide-class will supply our fighting ships, including our two new aircraft carriers, with fuel and stores, allowing them to remain on task for as long as required. But they offer more. Through their ability to support an array of forces, such as helicopters and Royal Marines, the Tide Class will also be able to make a direct contribution to counter terrorism, maritime security and disaster relief operations around the world.”

“This is another great example of UK-Korean cooperation in defence and security. The RFA Tiderace is the result of a successful collaboration between DSME and a range of UK companies, whose skills have complemented each other to deliver this complex project. I am delighted to see this further example of the UK and RoK working together to ensure a safe and secure region and world.”

RFA Tidespring, the first new Tide class tanker, is now eight months late and has still not been accepted by the Ministry of Defence.

The information comes to light in a response to a question asked by Douglas Chapman, Dunfermline and West Fife.

“To ask the Secretary of State for Defence, what the principal technical faults are that have led to the delay of the transfer of the RFA Tidespring to the UK for customisation and capability assessment trials until 2017.”

Harriett Baldwin, Parliamentary Under Secretary of State at the Ministry of Defence, answered:

“Delays in finalising elements of electrical design and the installation of Multi-Cable Transit insulation in accordance with new legislative regulations resulted in some adjustments in the build schedule.

These issues have now been resolved and Tidespring is expected to arrive in the UK in early 2017 to begin UK customisation and capability assessment trials.

Notwithstanding these issues, which are not unusual for any First of Class ship, build of the remaining ships in the Class is progressing well and we remain confident that all four tankers will be in service with the Royal Fleet Auxiliary by the end of 2018, as planned.”

“We remain confident of delivering the MARS Tanker project within the original approved budget and expect all four tankers to be in service by 2018 as planned.

As with all major projects, timelines are regularly reviewed and the nature of this contract means the MoD is protected from any unplanned cost increases.”

Was it necessary to litter the ocean with all that confetti? Here’s hoping it’s biodegradable.

Dave B Philips
Reply to  Sam

All paper is biodegradable… However, i seriously doubt the biodegradable composition of Russian Jets in the Mediterranean…

Sam
Reply to  Dave B Philips

Some confetti contains plastic. And a large jet would probably benefit sea life acting as an artificial reef.

Dave B Philips
Reply to  Sam

Sure thing matey, you got me there!

David
Reply to  Dave B Philips

Shame we can’t build these in the UK.

Brilliant at least we know where to put all those polluting diesel cars that will have to be taken off the roads inside the next decade. Hey just leave the diesel in them the fish will love it I’m sure.

Any one else initially pronounce her as tider ace before thinking it out?

For tankers these things are pretty good looking ships, over twice the firepower of an OPV too haha

It is a humiliation to a great engineering country like Britain to have our Navy’s ships built in a foreign country. Every single Navy ship should be built in Britain, safeguarding our engineers’ jobs.

So…. taxpayers money sent to Korea in order to build rather nice looking oilers that will sit there indefinetely because the MOD can’t afford the 60-odd sailers to man it!

Four ships built in Korea or one and three quarter ships built in the UK for the money? The thing is, if we had them build our type 26 Frigates we would have a full 15 of them, but we insist on the UK doing it, and so stuck with 8 and a possible second rate class to follow? Just how badly do we need to maintain BAE systems? Our tech in regards to weapons fit and radar will still be based here…although that is probably the most expensive part of the ship.

US Navy Captain fired for voicing Coronavirus concerns for his crew...