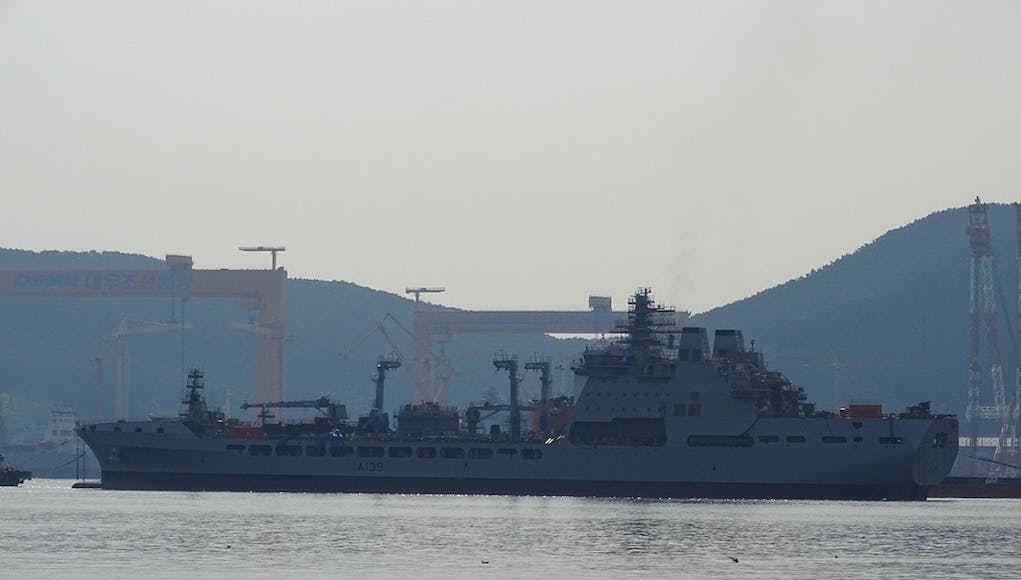 RFA Tidesurge was named by her sponsor Mrs Joanna Woodcock, whose husband is Second Sea Lord Vice-Admiral Jonathan Woodcock, at a ceremony in the South Korean shipyard where the vessels are built.

The first tanker RFA Tidespring is currently undergoing sea trials, having been fitted out at A&P Group’s Falmouth yard.

The second of the class, RFA Tiderace is on her way to Falmouth via the Panama Canal.

The fourth tanker, Tideforce, is currently under construction.

According to MoD, the customisation work is helping to support around 300 jobs at A&P Falmouth. The UK work content in the wider Tide Class programme is worth around £150 million, sustaining further jobs at 27 UK-based companies. The project is being delivered well within budget by the MoD.

Great ships – surely the model for how we design and build in this country. The South Koreans certainly are the benchmark which we need to beat.

These Tide’s look just the job – well done all!

Next year we’ll have more support ships than destroyers tho…

I know this would only be for super emergencies but could a landing pad be fitted to these for the F-35 as an emergency landing area?

I asked this before Peter. Would like to see it as an option on any Merlin capable deck for same reasons. Seems possible in principle but the jet heat would waste surrounding infra so would need to be very closely looked at class by class.

How about a towed landing area where the F-35 can then be refuelled and sent on its way? This may not be the cheapest option but is still way less expensive than having to buy a replacement F-35 or fix any damage to the ship.

The flight deck would have to be upgraded as the F-35B’s hot exhaust has the capability to not just scorch these ships existing decks, they can melt right through them like a cutting torch,

It’s gone quiet with the first Tide. There were pictures a few months ago of her in the UK having weapons fitted (complete with a collapsed crane in the background!). Presumably that’s been done by now. It would be nice to see a photo of her “fully dressed”.

Yes, but eu rules are making the UK government go abroad and use the lie that it is value for the taxpayer, and no UK firms bid for them.

What EU rules might those be? And if no UK firms bid for the work it might be difficult to award it to them!

So it was around 600+ million to build. Please use the total, don’t break dfown just building the hulls and trying to make them look cheaper than they are.