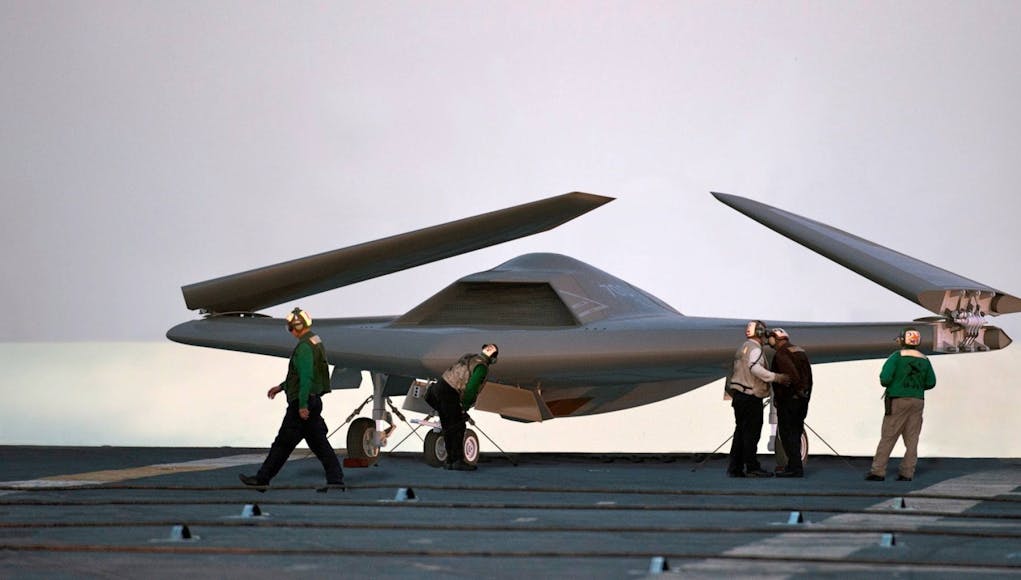 Rolls-Royce engines have been selected by Boeing to power the US Navy’s new MQ-25 Stingray aircraft, which will provide unmanned, carrier-based air-to-air refuelling.

The US Navy has awarded the MQ-25A engineering and manufacturing contract to Boeing to provide four aircraft. The MQ-25 is designed to provide the US Navy with a refuelling capability and extend the range of combat aircraft from carriers.

Each MQ-25 aircraft will be powered by a single Rolls-Royce AE 3007N engine, manufactured in Indianapolis, US.

The firm say that the AE 3007N, the latest variant of the Rolls-Royce AE family of engines, will provide more than 10,000 lbs of thrust and additional electrical power to the aircraft.

“Congratulations to Boeing for being selected to develop this historic aircraft in support of the US Navy. For Rolls-Royce, it will expand our UAV expertise with unmanned aircraft in the US Navy fleet, which includes the Triton and Fire Scout aircraft.”

The Pentagon are pursuing the Stringray in order to address the US Navy’s expected fighter shortfall by directing funds to buy additional Super Hornets and accelerate purchases and development of the F-35C, quickly getting F-35Cs into production.

The use of Stringray as a tanker also addresses the carriers’ need for an organic refuelling aircraft, proposed as a mission for the craft since 2014, freeing up the 20-30 percent of Super Hornets performing the mission in a more capable and cost effective manner than modifying the F-35, V-22 Osprey, and E-2D Hawkeye, or bringing the retired S-3 Viking back into service.

Although initially designated the RAQ-25, the designation was changed to MQ-25 Stingray. Stealth requirements will reportedly be “descoped” and it will still be capable of firing missiles or dropping bombs from drop tank pylons, but surveillance and destroying targets will not be its main mission.

The image is of the losing General-Atomics model.

I see there’s a new industry section to the site, don’t these sort of articles belong there?

Rolls Royce played a very clever strategic game by buying Allison in 1995 having been involved with the early stages of what became the AE 3007 Series engines with Allison then known as RB580 some years earlier. It gives them the required ‘local build’ access to US military projects like this which provides the funded development and key learning curve. The purchase also gave RR the big maintenance contracts for ex – Allison turboprops used by both US civilian and military operators But just as importantly they also have the engine for Taranis and any future EU FCAS aircraft (Taranis… Read more »

Well done indeed, Rolls Royce for pursuing your Anglo-US endeavour.
Sad though it is to report but cooperation with the French has largely been an excercise in futility for the past 40 years. The pram is surrounded with toys thrown headlong by Gallic mastery. Cameron and the rest of us should have been warned of such by the French national bird: a Cock.

I had never realised how apt the symbol was until you mention it. ?

The cooperative project with France on a future UAV is now dead. The funds have been redirected to Tempest.

Not dead, rescoped. Project will now focus on technology development and integration rather than an end product. The project will be feeding in to both Tempest and the Franco-German fighter.

I may be wrong but as far as I know the Adour only has a thrust of approx. 5,000lbs. That’s roughly the thrust available when used on the Hawk aircraft. Even with reheat/afterburners you are still looking as a max thrust of 8,500lbs.