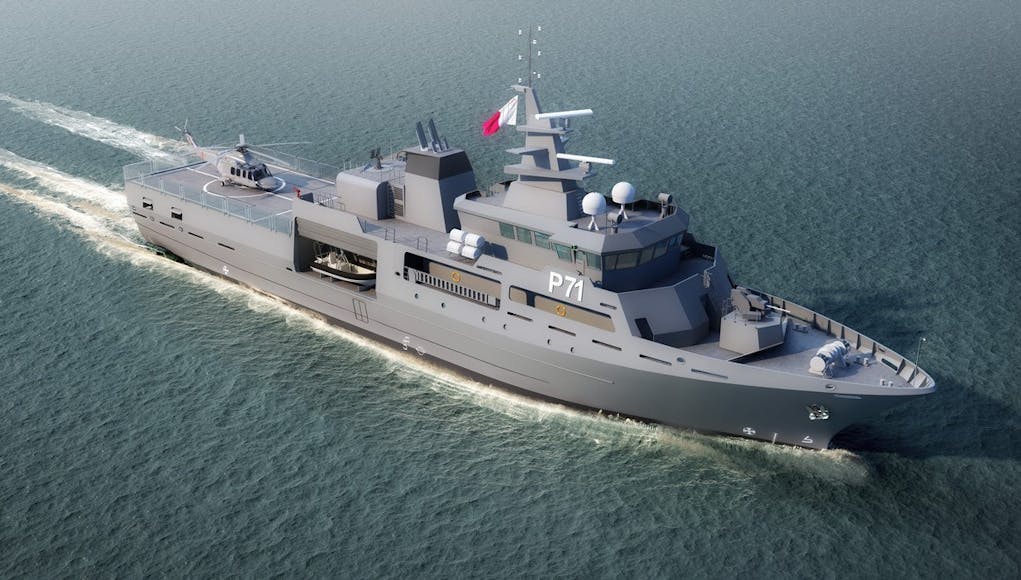 Rolls-Royce has secured a contract with Italian shipbuilder Cantiere Navale Vittoria for the supply of a marine propulsion package to a new Offshore Patrol Vessel under construction for the Armed Forces of Malta (AFM).

The 1800 ton displacement, 74.8 metre, twin-screw vessel will feature a Rolls-Royce scope of supply that includes a pair of PROMAS controllable pitch propellers and rudders, SC722 FCP steering gear, a TT1300 bow thruster, a TT100 stern thruster, Fin Stabilisers, and a touch-screen remote control system that incorporates the CanMan Touch Joystick for all units.

Rolls-Royce will also be integrating the various operation modes of the hybrid Diesel-electric-propulsion modes via a power take-in (PTI) for lower patrolling speeds of up to 12 knots.

This will ensure lower through-life operating costs, say the firm.

“This is a significant order from a long-standing customer of Rolls-Royce. Having supplied Cantiere Navale Vittoria with equipment for many of its smaller 40 metre patrol and coastguard vessels for which the yard is noted for, we are delighted to now assist the shipbuilder in meeting market demand for larger vessels. Vittoria intends to be a significant player in this market.

We are also delighted to further strengthen our cooperation with the Armed Forces of Malta, having assisted them over the years to maintain Kamewa water jets forming part of the propulsion system of two Search and Rescue launches.”

Yeah, I wonder where the RR engines are made though. Somewhere with cheap labour or Germany possibly Norway.

This would obviously only be a temporary solution and wouldn’t allow take-off but could they erect a tent over the helicopter if they needed to do major repairs and needed to keep it dry?
They already have barriers on the sides to stop people falling overboard so maybe the same housings for those could be used for a large tent?

Mmm that makes an interesting comparison to the B2 River’s,will look more into this I think.

To add looks like it will cost the Grand Total of 35 Million Euro !

I can’t see them having much in the way of combat management systems & decent radar etc… BUT from the CGI render… Port and Starboard small arms weapons stations with a .50 Cal or 20mm auto turret at the fore… Not too dissimilar from an offensive standpoint I guess!

But their are lots of better packaged designs out there.

this vessel on paper looks far superior- not sure of its range, speed, sea keeping abilities or combat management system but if they genuinely are only 35 million euros then you could just buy a dozen of these hulls and convert them into a modern day “flower class corvette” optimised for ASW and surface patrol/ surface strike. 54mm gun, torpedoes, hangar space for helo/UAVs, CIWS phalanx block 1B, 8 Norwegian antiship missiles in cannisters and a decent combat management system and radar suit and hey presto a fully fledged corvette. All for around £100 million- much cheaper but more heavily… Read more »

Dream on. In the real world, there are not enough Phoenix systems to properly outfit the existing fleet, there are not enough Wildcat helicopters to go round, the type 26 and 31 frigates will not have any AS torpedoes, and there is a real possibility that no destroyer or frigate will have any SSMs between 2022 and 2035.

Anyone know the price. This is the ship Babcock bid for for Appledore. Main contract lost possible due to Malta getting funding from eu.

https://navaltoday.com/2019/01/18/malta-signs-deal-for-second-offshore-patrol-vessel/. Read the text: eu would provid 34million eur in funding to this 35 milion eur contract. Yet… https://www.janes.com/article/85966/cantiere-navale-vittoria-set-to-start-building-new-opv-for-malta in which: The new ship, to be known as P71, will be built under a EUR48.6 million (USD56.2 million) contract awarded to Cantiere Navale Vittoria in October 2018. The ship’s design is being supplied by Spanish company Cintranaval-Defcar.. So what is the truth and how much is to do with just the shipbuild bit and any tax involved. Come on Britain, we need to get wise to these people and organisations!