In a demonstration of the versatility of vertical naval air operations, the River class patrol ship HMS Tyne has performed a winching exercise with a Coast Guard helicopter while sailing off the South coast of England in training. The Augusta Westland AW139 search and rescue helicopter, designated CG163, announced its arrival with a radio call to the Tyne before lowering a crewman, who then took down a rescue harness from the hovering helicopter in a simulation of the procedure for recovering a casualty from a ship at sea, using the cargo deck at the stern of the vessel. After lifting back up the crewman and the harness, CG163 left the area and HMS Tyne resumed her work.

The River class Offshore Patrol Vessel (OPV) serves the Royal Navy in the Fisheries Protection and Maritime Security role, patrolling British territorial waters all year round with 30 crew, 1700 tons displacement and a 20mm cannon to enforce maritime regulations as needed. This has included such high profile roles as escorting foreign vessels around UK waters, such as HMS Severn’s role in meeting and escorting two Russian Navy vessels in June 2014.The class consists of three vessels stationed in the UK, some of the busiest in the Royal Navy, while a fourth vessel, HMS Clyde, patrols the waters of the Falkland Islands in the South Atlantic and a fifth was sold to the Royal Thai Navy under the name HMTS Krabi. BAe Systems is currently working on the Batch 2 River Class vessels, which will also serve in the Maritime Security role equipped with a helicopter landing platform.

Below: HMS Tyne watches the crewman lower from CG163: 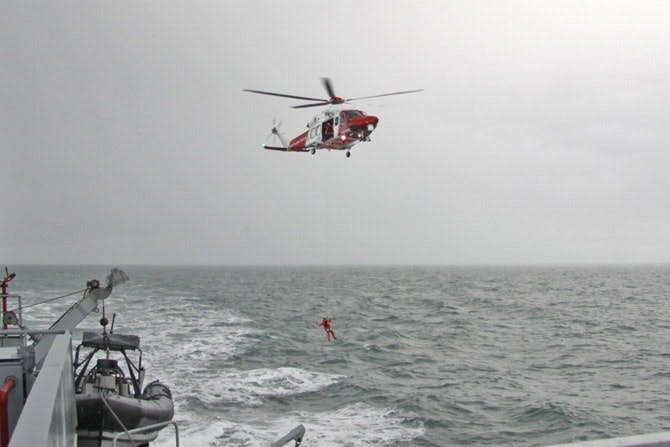 The new Batch 2 OPV should be enlarged a bit to accommodate a hangar for a Wildcat HM for some ASV/ASW capability. Then give it a 57 mm gun for a little more firepower and AA defense.

Instead of de-commissioning all the late model Lyxn as the Wildcat comes on stream they could be well used as a lower spec onboard air asset c/w concertina hanger for the upcoming batch2 opv instead of trying to shoehorn a HM2 if and when available.