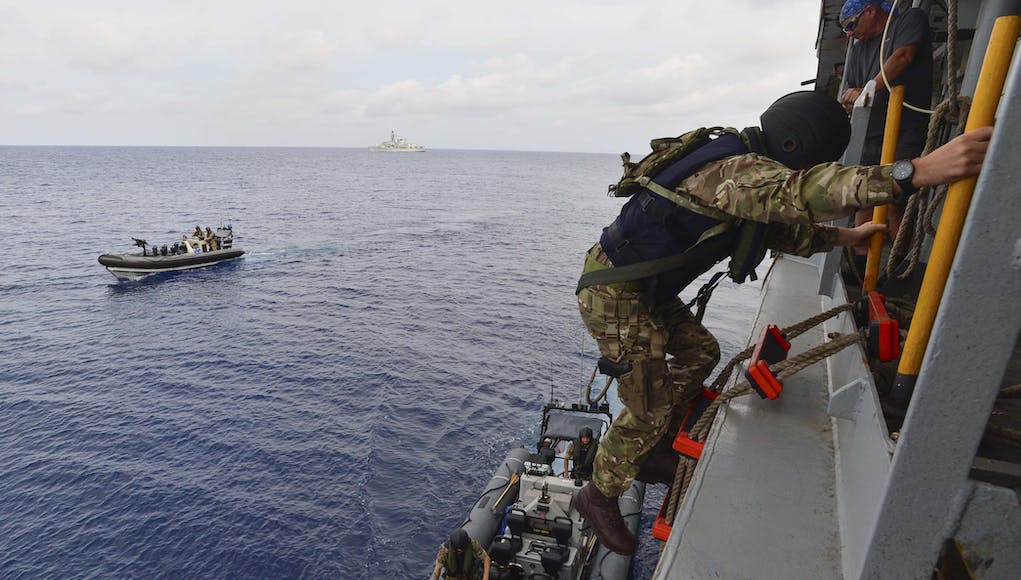 According to the US Navy, the drills involved Royal Marine commandos, Royal Navy sailors and Guadalupe crew members.

“During a visit, board, search and seizure (VBSS) scenario, Montrose’s boarding team embarked and secured Guadalupe, which simulated a vessel engaged in high seas trafficking.”

The ships also practiced replenishment at sea using NATO procedures, which ensured that the two ships, despite never having worked together before, could safely and efficiently transfer fuel while underway.

“This was a valuable exercise for us, keeping our integrated Royal Navy and Royal Marines boarding team sharp and ready to deliver any mission assigned to them,” said Cmdr. Conor O’Neill, commanding officer of HMS Montrose.

“That we were able to achieve this training, and the replenishment drills afterwards, is testament to the close working relationship between the Royal and United States Navies, both in the Pacific and globally. It helps expand our capabilities and I believe it helps them, as well,” said Eric Naranjo, civilian mariner chief mate aboard Guadalupe. “It’s important because if you don’t practice these scenarios, you won’t have the skills necessary to succeed when the time comes.”

This is the third cooperative deployment between the U.S Navy and the Royal Navy in as many months.

USS McCampbell and HMS Argyll operated together in the South China Sea in January, and a trilateral anti-submarine warfare exercise was held in December between the U.S. Navy, Royal Navy, and Japan Maritime Self Defense Force.

I’d rather the RN conducted security drills in the English Channel and off Gibraltar.

I think it serves to show our ability to project force

Security in UK/Gib waters should be the responsibility of a coastguard equipped with fast patrol boats and helicopters. The South China Sea is exactly where the navy and its warships need to be right now.

It’s essential that the Crew of HMS Montrose keep practising their boarding skills, because she will soon be forward deployed out in the Gulf, and they will definitely use them out there!

As the RN plans to send a carrier battle group to the South China Sea in 2021, two type 45s should each receive 16-cell mark 41 vls modules. This should cost approximately £26m based on the recent Finnish acquisition. Also aster 30 should be made compatible with the mark vls. Furthermore, two sonar 2050 sets should be transferred from the two mothballed type 23s to these two type 45s. This should be combined with a purchase of asroc to de-risk its likely future adoption by the type 26. These changes should give the CBG more teeth, respectability and survivability when… Read more »

Gunbuster
Reply to  Yardarms and Ratlines

It would take 3-4 years to just do the paperwork before they actually started any work. From my experience of trying to get weapon systems into service in the RN …. Mk 41- No in corporate in service experience. So a full package of buying, training and maintaining the system. Then Integrate it in a T45 including; New steel work, all the new wiring from the launcher to the ops room and equipment control room. No magazine fire fighting so a shed load of new pipe work and major alterations to the sea water fire fighting system. A whole new… Read more »

Aaron The Humanist
Reply to  Gunbuster

Great insight into the complications of retrofitting. I am sure many of us non-Navy types have wondered on many occasion “why don’t they just…”

Didn’t Williamson get rebuked by the Chancellor for upsetting the Chinese with his premature announcement about sending the carrier to the Pacific on its first employment in 2021? That gaff cost UK plc millions in trade in poultry and cosmetics sectors. Are we still sending the carrier? I wish politicians wouldn’t use defence and national security issues as a way to jostle and position themselves for Theresa May’s job. First it was Williamson and his gunboat diplomacy against at the Chinese and now its Sajid Javid revoking Shamima Begum’s nationality when he knows full well that it’s eventually going to… Read more »

It’s not really a credible government anymore, more a collection of loose alliance’s. Definitely not strong and stable. more a Zombie government.
We need to expand our defence industry. The idea we are unable use state investment in our industry is a fallacy. We have chosen not to. The French use the national security to do so.
It’s hardly a competitive industry in the UK. So privatisation didn’t produce a competitive UK market. Just a smaller one.