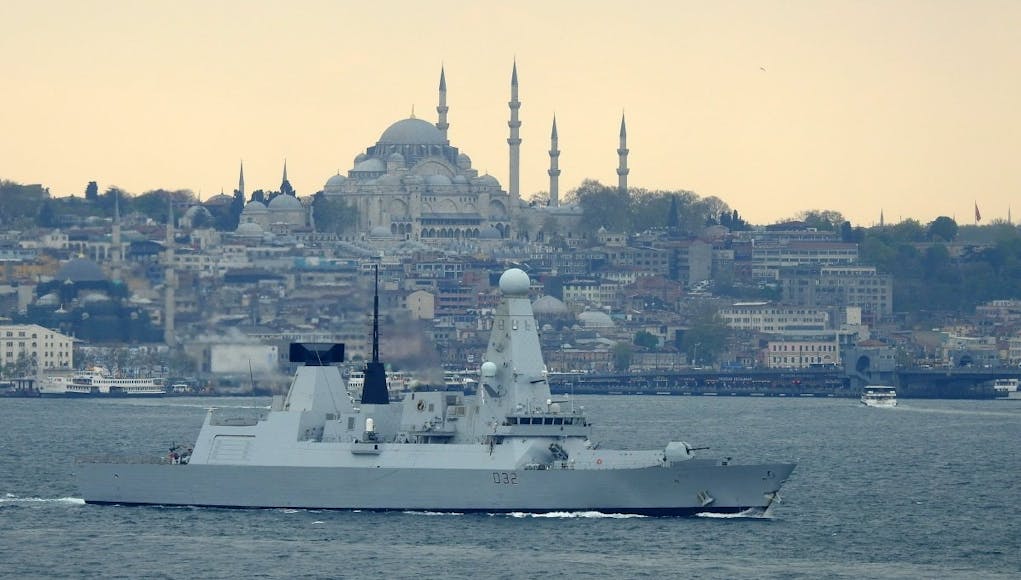 HMS Daring has sailed through the Bosphorus Straight and into the Black Sea, a move described by Russian media as ‘clear provocation’.

The Type 45 destroyer is the most advanced air-defence vessel in the world. So powerful is the vessels SAMPSON radar, from its position in Dublin Port it could monitor the air traffic over the entire island of Ireland. The US Naval War College has suggested that the SAMPSON radar is capable of tracking 1,000 objects the size of a cricket ball travelling at three times the speed of sound

The UK’s National Audit Office reported that, during an “intensive attack”, a single Type 45 could simultaneously track, engage and destroy more targets than five Type 42 destroyers operating together.

Defence Secretary Michael Fallon last year had confirmed that the UK was to send a Type 45 Destroyer to the Black Sea in 2017 as a demonstration of the UK’s on-going commitment to support Bulgaria, NATO’s southern flank, and wider shared security interests.

Mr Fallon said at the time:

“We want to send a clear message to our allies that we are standing strong with them to defeat our shared security threats.”

British Army and Royal Marine personnel have been collaborating with NATO forces on a range of exercises to improve interoperability.

The Type 45 Destroyer visit follows-on from HMS Duncan’s participation in a training exercise alongside a Bulgarian Navy minesweeper in November last year – the first major Royal Navy vessel in the Black Sea for seven years.

Let us hope it doesn’t add to the provocation by breaking down in the middle of the sea.

The Russians don’t own the Black Sea, which is bordered by Turkey, Romania, Modavia, Bulgaria, Georgia, as well as Ukraine, Russia and Crimea.

Home of the proud Moldavian people.

Shame about nearby Moldova though, that’s landlocked.

Nice to see she has Harpoon – for now….

Read an article on another site that said she has a single Wildcat embarked.

Thanks. Should be pretty capable, and multi-purpose.

From next year they will be armed with actual harpoons.

Been thinking about it, and while I think everyone should just get on with each other (laughs), international waters and shipping lanes are just exactly that, and just as the Kuznetzov is entitled to sail through the Channel and around the Med, and the Black Sea Fleet to go through to the Med, so are NATO ships entitled to go into the Black Sea. In fact this should be done on a regular basis to normalise it. I daresay it’s totally coincidental that at the same time as 4 Typhoons are flying around Romania, an air defence destroyer capable of… Read more »

Hats off on para 2 Dadsarmy

Fallon is hoping it will break down so that he can reduce the Royal Navy surface ship numbers yet again.

A present for you Mr Putin!!!

Well if she breaks down, we can always ask the Americans to help out…. seems to be HMG’s ‘MO’ of late – ref. F-35; we can’t be bothered buying enough ourselves for the QE carriers so why not ‘borrow’ some from Uncle Sam to make our numbers up… pathetic!

What can you do when 20% of the defence budget is redirected to foreign aid?

Do away with the buracratically expensive procurement system. Like building Apaches in the UK for £50m each including the factory instead of buying them from the US for £12m each. Like trying to develop a Nimrod AEW squadron for £1bn instead of just buying AWACS. Like FRES delivering 20 years of nothing. Like having BAE suck up £12bn for 6 T45s instead of 12 T45s and due to do the same for the T26s. Like having BAE full stop. Like having a gov that thinks about jobs more than service lives. And don’t get me started on the F35B or… Read more »

General trends on this are sadly all too true. type 45s are very capable ships. Their power supply and propulsion issues need resolving and the type like all RN warships need a replacement for harpoon. The cost of the type 45 programme was mostly down to research and design but now we have done that R+D why could we not relaunch the type 45 hull design, enlarge it and equip it with two 5 inch guns+ a large mk 41 vl system and go for a light cruiser which is what the RN needs to face down the coming Russian… Read more »

Ongoing is one word, not on-going.

Maybe if there was a risk of Daring breaking down in the black sea they should have sent her in with our forward repair and engineering recovery ship. RFA Diligence….oh wait a minute they scrapped her quietly and without any notification of parliament earlier this year….another capability gap opened up.
With the downtrend in North Sea oil industry there are an abundance of support ship/ heavy off shore engineering hulls available yo purchase. The MOD could get a replacement for RFA diligence for very little money currently……

Find Putin and the Kremlin to be quite mad.
HMS Daring deploys to the black sea and that is a provocation? Whilst deploying an aircraft carrier, nuclear powered battle cruiser and a force of destroyers and frigates through the English channel is what?
friendship and cordial relations?