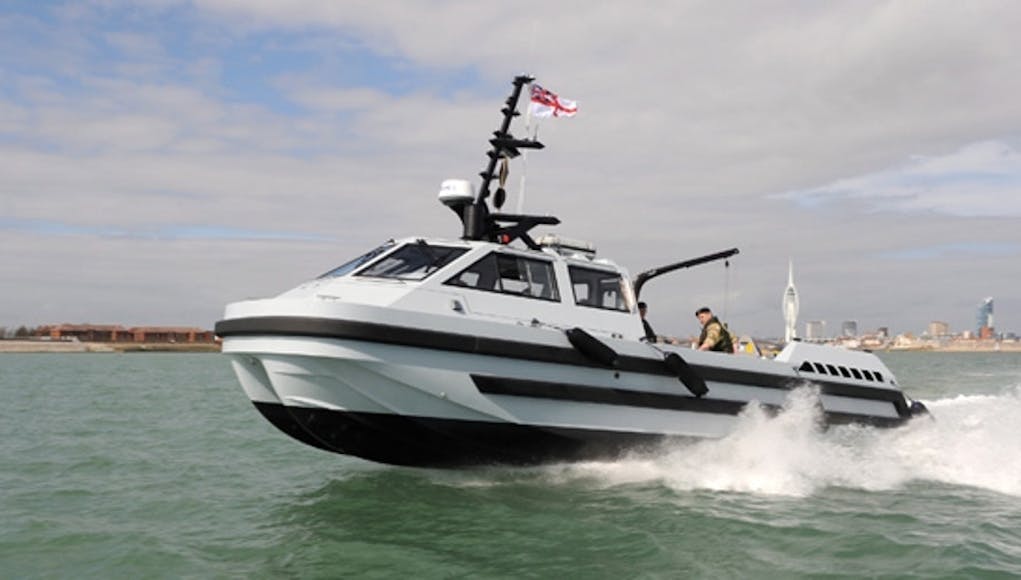 The Hazard motorboat is currently being put through its paces by a specialist team of sailors in Portsmouth naval base according to a UK Ministry of Defence press release.

The Hazard motorboat can launch two types of unmanned craft, the first of which is the Remus 600, it can scan the seabed at depths as deep as 600 metres and secondly the Remus 100 which operates at 100 metres, who would have guessed? The unmanned craft would be tasked with scanning the ocean for mines and then return to the Hazard mothership. Another unmanned vehicle would then be tasked to destroy the mine. Additionally, the vessel can reportedly fit into a C-130 for transport.

“Collectively, they can search for, hunt and finally destroy mines faster than the Royal Navy’s Sandown and Hunt class ships, and they also have the added benefit of keeping the sailors required to operate them out of harm’s way. Modified versions of the same systems are also being looked at to carry out survey operations such as those performed by HMS Echo, currently looking for the missing Malaysian airliner, as part of the future mine-countermeasures and hydrographic capability programmed.

The immediate goal for the team is to fit this technology and unmanned sweep systems to a Hunt-class ship, but in the future the system could easily be run from any reasonable-sized warship, and sent anywhere in the world in just 48 hours.” said the Ministry of Defence press release.

“The technology is proven. We’re taking it into the military realm. This will be the seafaring equivalent of the unmanned aircraft which have revolutionised aerial warfare. It takes the sailor out of the minefield, but we are not taking them out of the equation. You will still need individuals with specialist mine warfare and hydrographic skills, a human being to identify a contact, but they will be much safer, and this is a much more effective way of doing our job. This technology is fantastic and we are right at the forefront of it. It is the future.” said Lieutenant Commander Jack McWilliams, Officer in Command of MASTT, the Maritime Autonomous System Trials Team at Portsmouth.