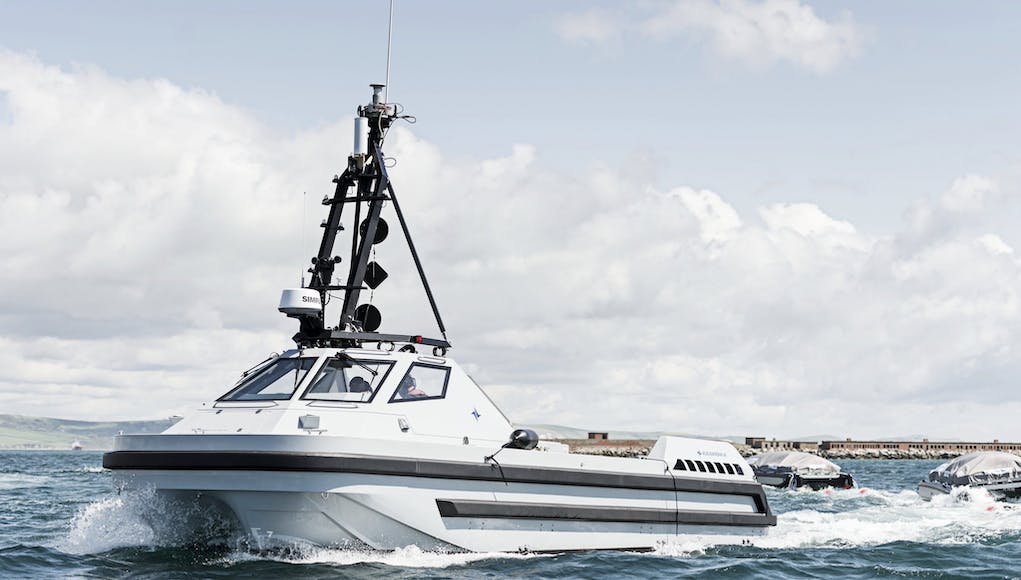 Motor boat Hussar can be sent off on missions, using a series of small, hi-tech boats trailed behind it to detonate the latest underwater explosive devices – potentially clearing minefields en masse.

The Royal Navy last conducted real-world sweeps off Iraq in 2003 using remote-controlled boats, while HMS Ledbury conducted the final run out of traditional sweeping gear off the Isle of Wight in 2005. More than a dozen years later, the Royal Navy is on the cusp of returning to sweeping – but using autonomous boats, keeping sailors out of harm’s way.

“In the digital age, magnetic minesweeping was becoming obsolete – it goes back to World War 2. It could not deal with modern, digital mines,” explains Cdr Mark Atkinson who oversees providing the mine warfare branch with new kit.

According to a press release issued by the Royal Navy, modern mines can be sophisticated enough to take out a specific ship or class of ship if they know its signature – the magnetic, electric or acoustic field or noise generated by a vessel as it moves through the ocean.

Hussar is an 11-metre-long ‘mother ship’ which is followed by the 21st-Century sweeping system, a series of small ‘coil auxiliary boats’ or CABs. The CABs are designed to replicate ship signatures to trigger the mines – and use lessons learned from IED blasts on vehicles in Iraq and Afghanistan to deflect and dissipate any resultant blast so that damage is minimal.

This has appeared before but I welcome the extra detail. Although I cannot see how a CAB can survive a blast designed to cripple a major surface combatant. I would have thought the entire sweep would have been blown into oblivion. The force of the shock wave is beyond belief.

It might just ride the shockwave as it is light rather than be obliterated by it.

This is why Arrowhead should be selected for the type 31. I can’t see the smaller Leander being able to house as many of the autonomous systems that are going to be available in the future. This is a prime example where the t31 could excel as a mother ship for unmanned systems.

Is this boat truly autonomous, or do they mean it is operated by remote control with someone still having to steer it?

Clive, I suspect that just like most RPAS, it is both. A route to steer will have been programmed into the vehicle prior to launch, and the vehicle will navigate this route with waypoints autonomously. But at any time it will allow for operator intervention by remote control in reaction to new intelligence or feedback from remote sensors or for whatever other reason.

Trust me, there would be major major major headlines all over the world the first time a truly offensive autonomous weapon was being tested.

A similar American program has the ships sonar/radar equipment and navigation systems under AI while the weapon fire ability is under command of an operator.

We really need way more autonomous marine systems, paying a billion pounds for a frigate staffed by 150 sailors to tow some sensors through the Atlantic is unaffordable.

MCM has had a lead in autonomous systems for a while and we need to now expand that into ASW.

Trouble is Martin than to tow anything significant in the form of a VDS or towed array you need something the size of a frigate or corvette, so once you have such a ship you might as well get it to do other things as well. With the advent of multi static coherent techniques it could be possible to deploy autonomous vehicles to monitor returns from active sonar sources, but this can be done by simple disposable sonobuoys deployed from MPAs or helicopters. These could in turn be RPAS but again a UAV is likely to be able to carry… Read more »

Good points Richard however I was thinking not so much of autonomous craft towing towed arrays but smaller more dirstributed sesnsors. These might work in conjunction with traditional platforms to actually follow submarines once they enter a certain part of the Atlantic as a way to discourage submarine incursions. When a frigate cost a billion to buy and we need three to make sure one is deployed we can’t use the same ideas we did in the past. Over the past 50 years the ASW frigate has morphed from an OPV to a heavy cruiser with a price tag to… Read more »

Data…it all comes down to data. Distributed sensors will need to transmit information back to the mothership constantly because ASW is very very real time . ASW is data intensive. The computer on a Sonar set is a lot bigger and more powerful than a radar computer and is up there with a CMS system in performance. Environmentals, ray paths, signal processing plus all the left, right, slow, fast, signals to the boat and the up, down, transmit now, signals to a VDS all need bandwidth. If you are beyond the horizon UHF/VHF is out so you are left with… Read more »