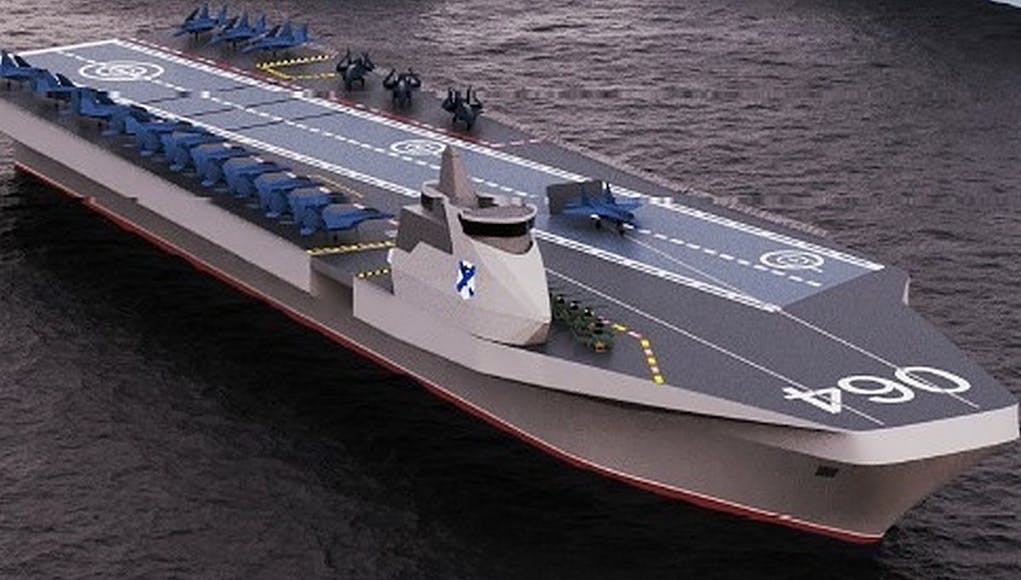 Readers will note however that Russia appears to reveal a new design every other month and the designs typically never see the light of day again.

‘Varan’ would have a displacement of 45,000 tonnes and would be able to carry 24 fixed-wing aircraft, 6 helicopters and ‘up to 20’ unmanned aerial vehicles according to state media Tass.

Nevskoe PKB is reportedly one of the largest domestic developers of ships in Russia and the only designer of aircraft carriers and training complexes in Russia.

I can’t ignore the huge sense of deja-vu when writing this article because I wrote something similar in 2019.

At an annual Russian defence exhibition in 2019, the Krylov State Scientific Center unveiled concept for a new aircraft carrier, displayed below.

According to Russian state media, TASS, the ship if it’s ever built would have the following specs:

“According to the materials presented on the Nevskoye Design Bureau’s display stand, the aircraft carrier that will get a nuclear-powered propulsion unit will displace 80,000-90,000 tonnes, feature a maximum length of 350 meters, have sea endurance of about 120 days and will be capable of developing a speed of about 30 knots. The aircraft carrier will have a crew of 2,800 and its air task force will comprise 800 personnel. The carrier will have a service life of over 50 years.”

Russia now has the largest fleet of model aircraft carriers in the world.

Russia now has the largest fleet of model aircraft carriers in the world. ?

It gives a whole new meaning to fantasy fleet!

Yeh, but do they have Radio Control?

If not even the model fleet can’t go anywhere! 🙂

With 2 x 20 foot D shackles on the bow to make it easier for the tug.

Do they have a large enough play room?

At least is break with past designs. With catapult and side elevators.
There is not much angled flight deck. It appears can’t fly and land at same time.

Maybe it is an attempt to simply the thing so it could possibly get built? Both in terms of dry dock size needed and budget. Bear in mind Russia no longer has access to the shipyards the previous carriers were built in and creating a dock for a 90kt carrier is of itself and expensive business. QEC’s max length was determined by the available dock size. I agree it won’t sustain the kind of sortie rates that a QEC can with that layout. 45kt is about the smallest catapult carrier you can build and as we have gone over on… Read more »

The shipyard where the previous carriers were built (Nikolayev, Ukraine) itself cannot build a dingy today, so it’s no loss for Russia.

Bear in mind that the old Carriers were built in the 1980s, things have changed, the world has moved on. Russia now has large shipyards more capable than the old rut at Nikolayev, e.g. Zveveda in the far-east.

If Russia & China were to pool their carrier knowledge, they might come up with a half decent design, eventually.

If they want to plough a large proportion of their defence budget into this or another design then I’m all for it. After all, the carriers are only effective if there is something decent to fly from it and there is nothing on the horizon to suggest there is. They would be far better off building more subs or something to replace their ageing cruisers.

Agree Rob, it is a silly idea. There is not good argument to justify building a carrier except all the others boys have one so we want one too

Russia has the potential for a gigantic force multiplier in its submarines, thats where the budget should and does go

Agree Levi, but even in submarines we should not fall into the trap of trying to keep up in numbers with the Chinese or Ami, we cannot afford it and should not waste our time trying, concentration on SAM, ballistic and cruise missiles I think should be our main focus for defence, I have no desire to play the power projection game, let them fight it out for top position, we only need to secure our interests, not police the world

I agree Uyla Russia in its current traditional form policing the world (not that it ever has) would be like getting the mafia to police a country ,woops I just described Russia’s currents status.

Hi George from what read the Ukraine has the only port large enough ,equipped enough to bulid a carrier .

The Zaliv shipyard in Kerch Crimea has the ability to build ships up to 390m long still think the Russians didn’t invade Crimea?!

While i understand the sneering now that we have 1 sea worthy aircraft carrier, but people should be in no doubt that Russia would kick our backsides, many times over, if a UK vs Russia war were to break out.

Hi Jack, where would this hypothetical war be taking place?

Depends on the context.

If Russia tried to attack us they’d be spanked!

Good luck getting to us. Expeditionary long range naval and air warfare we have over them in spades

All true. Even during the Russian revolution the British where fighting alongside American troops on the ground in Mother Russia alongside the Whites. We didn’t do it alone.

Sorry jack but you have got to add reality in your basic scenario which is NATO
,without NATO we the UK would have to have a bigger force than nowadays. NATO would be hard to beat in many scenario’s.

And how would they beat us ?

I’m sure they would kick our ass anywhere on their boarder if we were some how caught in a solo land war against them 1854 style but I don’t think there navy would get far past the Kola Peninsula in a shooting war with the RN.

“a solo land war against them 1854 style”-LOL- You mean that Crimean war fought alongside the French & Ottoman Turks? That’s a very robust version of “solo”.

I fear any naval conflict with Russia would quickly result in our fleet being overwhelmed by mass advanced AShMs we can only dream of until the 2030s. But indeed we’re part of NATO, thank goodness, so any conflict would involve pooled resources. Trouble is indecisive NATO leadership & decades of myopic cuts. That allows Russia, Iran, China etc to act far more boldly.

Is it me or does anyone else think this looks like a large commercial hull with flight deck. Perhaps look to convert rather than build from scratch.

Might just about make it affordable for the Russians, though I’m not sure about integrating an entire CATOBAR system on top of that. They might manage STOBAR built to commercial standards but with their track records that just means double the number of breakdowns and fires.

It does a bit, but integrating CATOBAR system into a commercial hull would probably be challenging.

What drives the Cat?

At one point they even had a two-island design concept model, like ours.

Airborne makes a good point re Russian base locations.

Geographically they have always been at a disadvantage. Northern fleet constrained by GIUK gap, Baltic and Black sea fleets can also be cooped up by NATO, as can the Pacific Fleet by the two straights north and south of Japan. Only their SSN base at Petropavlovsk on the Kamchatka can access open Ocean.

Building a Carrier for their mainly bastion operations and projecting SSN into the Atlantic seems such a waste of resources.

What is that new port in Western Pakistan, near the Iranian border, being built by the Chinese? Gwador, Gwajor, something like that? It was part of “belt & road”, but is progressing slowly. So little commercial trade going through it, there is a rumour that the Chinese Navy, will use it as a forward base. Perhaps they might share it with the Russians?

Just looked it up, Gwadar.

Didn’t know of that John. I recall the USSR had facilities in Vietnam ( Cam Rah Bay was it?? ) and in war that would last 5 minutes.

Well that is true of any port, including Portsmouth & Faslane, unless they have 3 level air defences.

Unlikely, geopolitical realities are going to force China and Russia to be at each other’s throats within a couple of decades.

China is going to be hitting a land and food production crisis sometime in the next 20-50 years, almost all the global climate models put China is a big food security hole.There is only one practice place they can go looking for productive land and that’s Russia.

Or all that lovely space & resources in Australia or NZ? Indo-China & the Indonesian-Malay-Phillipines at least. May be a neo-colonial east Asian empire? China is & has always been an imperial power. It’s huge build up of forces hints at larger aspirations & is a major threat to freedoms & liberties worldwide. The SCS island building coup & massive naval program is step 1 in excluding the USN from interferring in it seeking to invade Taiwan & bow its neighbours to its will. It’s tearing up the HK agreement, commiting genocide upon the Uighurs, annexed Tibet, invaded Vietnam &… Read more »

US/Western sanctions, may force Putin & Xi into bed together, even if they have to put bags over each others head.

I agree when viewed through the prism of high end peer conflict vs NATO. However Russia, and perhaps China, may be less focused on using carriers and amphibious vessels in a peer conflict, where the focus would be grey-zone warfare and where a hot war is less likely, and more on intimidating and/or influencing third party countries, either bordering them or in areas they consider to be of interest. Undertaking actions where western nations may be less keen to commit to a high level military response. It might explain Russia building the Ivan Gren landing ships and the Project 23900… Read more »

Maybe they will eventually build something that’s not made of cardboard and plastic!

Why have the island so far forwards compared to other carriers? Any advantage?

Easier to see the tow line coming from the ocean going tug?

I find it very fitting that behind the model is a photo of a tug.

Isn’t the model Lamantin rather than Varan? Naughty Tass, trying to recycle old photos! Check the model and background against the photo from this article last year.

I’m not sure they’ve build a “real” model of Varan yet, just a computer mock up. Even the largest model carrier fleet in the world is undergoing cutbacks.

I can’t lie, this things looks really cool. No comment on whether it’d be any use however.

The model looks good but on examination it seems to have many potential problems, e.g.: Unless nuclear powered, the island will have to be moved aft Flying ops with the angled flight deck as shown will be a nightmare. Perhaps the landing runway could be repositioned to port and made parallel to the ship’s centre line – as was planned for CVA-01 which was similar in size. The lifts seem very small (just one aircraft) and are also poorly positioned compared to the deck park, catapults and the arrestor gear. Two large deck edge lifts (each two aircraft) on the… Read more »

4th watch
Reply to  Richard B

Unless Nuclear powered it will probably be conventional steam and a smoker. Problem is in Cat launching. This looks in the 35000-40000t range and from bow shape only about 21kn max. Is it for training? is it a Duck?

Yes, it does come across as an Oceanesk aircraft carrier.