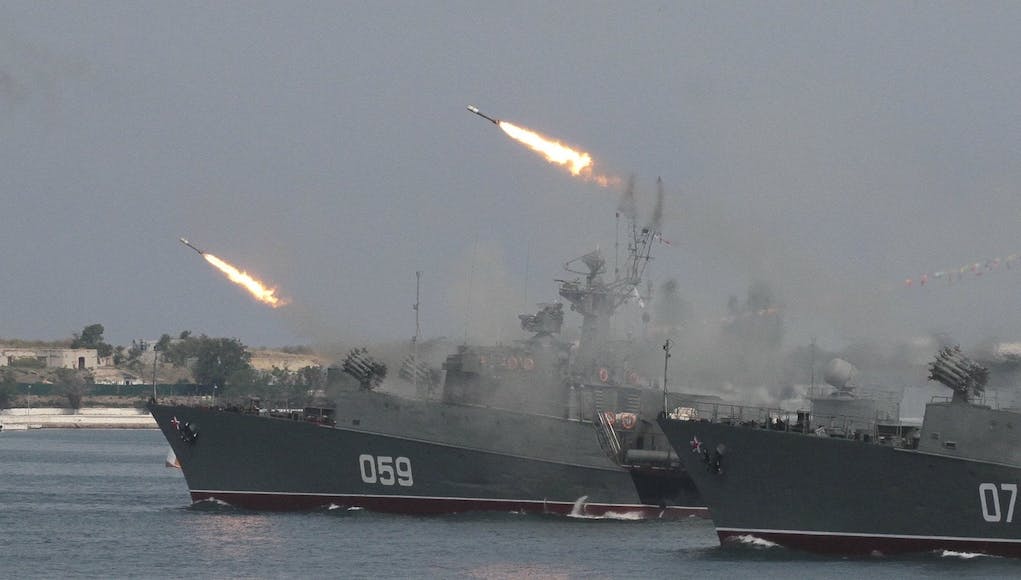 The Russian Navy will introduce 26 new ships this year, President Putin said as the country celebrated Navy Day with a show of strength.

“In total in 2018 the navy should get 26 new warships, motor boats and vessels including four warships with Kalibr cruise missiles,” Putin said in the northwestern city of Saint Petersburg, Interfax news agency reported.

Kalibr missiles fired from Russian ships in the Mediterranean and the Caspian have been used as part of Moscow’s military intervention in the conflict in Syria in support of President Bashar al-Assad.

The commander of the Black Sea fleet, which is based in Crimea’s port of Sevastopol, Vice-Admiral Alexander Moiseyev said six new vessels including missile ships would be inducted by the end of the year, Interfax added.

Putin reviewed the annual naval display on the Neva River in Saint Petersburg with 39 warships carrying out manoeuvres.

He told the 4,000 servicemen taking part that the navy “is making a weighty contribution to the fight with international terrorism.”

He added that “Of course we will continue measures aimed at strengthening and developing the navy, boosting equipment.”

Will they float though?

“The Russian Navy has already taken delivery of eight new ships this year, Putin added.”
I count 2 I think…

1 of which was actually launched in 2010 but has taken 8 years to be commissioned!

There are other ships undergoing trials and being fitted out…

This includes tugs, workboats etc..almost down to rowing boat level..

every russian ship is fitted with every kind of armament that will fit. how come our new carriers and the albions aren’t?

The thing is Russia only has the facilities to build small ships and even they take nearly a decade to build, hence why they got the french to build LHP for them, thank god the french saw sense in selling them to Egypt instead.

They had their arms twisted

The 2 LHD Mistral Class could have been in Canada today if we had not “dilly-dallied”. We could have had a very substantial Amphibious Sealift Capability much sooner!! My thoughts anyway. Cheers Dave12!!

David. Without crews to man them or money to fill their fuel tanks !

LOL most of Russias fleet is soviet era and now your fleet are with out its only rust bucket carrier with 2 years of repairs a head of it and as I said with no means of building a new one or any other large vessel. Try again TH,or just go on RT chat forum, there are many russian fantasist there lol!!!

No TH, actually I was about to question the 26 vessels comment. As in, how many are useful warships and how many are coastal vessels?

Putin bigs things up. I have already been on here previously defending Russia, to which many here disagree. Fair enough.

The Russians are expanding their military just like countries in the Middle East and Asia. Strangely it is the west that some want to disarm in response?

You know who you all are.

Does it. Well I never!

Will that be six principle ships in, and six older vessels out? If so, that’s not a true expansion. However, if they are added, then that’s equivalent to the so-called Type 31 fleet in just one year! If anyone at the helm of the UK forces should have any doubt about Russian intent, then look no further. The current farce over Type 31 is so typical of a government that treats defence as the playroom of government, and not the principal engine of responsibility. One thing is clear, Russia, China, Iran, and North Korea treat defence as a number one… Read more »

What do you think the Russian intent is Maurice?

That’s the $64,000 question. I believe they fear Chinese expansion into international waters, but to address that longterm, they also need to demonstrate their growing dominance in Europe. What they can’t shake off, is the fact that NATO hardly changed it’s mandated even when the Russian state was at its lowest profile? The perceived aggressive posture of NATO has possibly been poorly managed in terms of toning down its overview of Russian intent. When Putin arrived, he wanted to re-establish Russia’s international profile, especially against US international policy. After the dismantling of the Warsaw Pact and to some extent instruments… Read more »

Russian foreign policy is pretty simple, the complexity comes from actually managing it: 1) The near abroad, this means Russian must control all its neighbouring states as a form of protection from the world. This inevitably puts it in conflict with Europe specifically and most importantly in regards to Poland and the Baltic states. 2) ethnic Russians must be under the control of the Russian state even if they live in a different state. This is a big problem it was one of the founding principles a number of historical fascist states and is often a major cause of wars… Read more »

Bang on Jonathan, the only way to govern such a huge sate is with a firm hand. Relatively recent history when the country was split by civil war and the horrendous defence of the homeland, during WW2, cast the mould of modern Russia. Keeping the home sate intact is just one facet that Putin had to address, external threats needed to be tackled whether they were real or perceived dangers. This included foreign deployment as witnessed in Sira. As I said above NATO has kept up the rhetoric throughout, without offering constructive ideas for improving relations. I will never forget… Read more »

quantity has a quality all of its own. hence why we wouldn’t touch NK with a barge pole.
How are our 19 surface combat craft getting on by the way?

We could do with more of course.

I agree that quantity has a quality all of its own, been suggesting that for ages.

However, how many of their vessels would be sunk by our Astutes lurking in their waters?

We do have certain trump cards. SSN’s and a carrier with well equipped aircraft can close a sea, especially in conjunction with allies.

we’ve got a handful of subs. how many do they have?

How many are operational, and are not rusting hulks with the signature of a herd of Buffalo.

German Panthers, Tigers and other Jagdpanzers could take out hundreds of T34 before succumbing to numbers, usually because even though they won the local tactical battle they lost on the wider front and had to withdraw.

But this is not the Russian Front. And the RN would not be alone. Unlike the Germans.

But anyway. I do not believe the North Koreans are a threat to anyone but themselves. They keep nukes so they do not go the same way as Gadaffi and Saddam.

Otherwise how many years ago would the USA have moved against them without a deterrent?

Reaper is trying to make out hes from the uk lol!! Russian troll alert!!!

‘Quanity has a quality all on its own.’

Very true, as we saw in WW2. But never underestimate the power of quality. Iraq did with its tank fleets. Remind me how many tanks of our own we lost again?

Oh come on NK always had a deterrent it’s called China. And for most of the period it did not have a serious nuclear deterrent but the US did not move against it. That’s not coincidence.

You certainly have a good point with China.

They would not accept a US dominated N Korea on their border.

You could also say Europe has a deterrent called the USA but can another country ever be relied upon as much as your own?

I think not. Even a China.

Well Ireland seems to think so!

Tim-apologies for nitpicking but Korea in 1950 was a UN mission not a NATO one.

An interesting question comes to mind. How would any country realistically prevent trade without starting an all out war (need to avoid a shooting match) and same question in reverse, how could they be stopped. The only way I can think of is by boarding anything that enters the area and forcing it away, but how can you stop that. South China sea is an interesting one, since they will eventually have such immense military power both land based with land to see missiles, air through large numbers of air bases and of course navel. There is no chance that… Read more »

“How would any country realistically prevent trade without starting an all out war (need to avoid a shooting match) and same question in reverse, how could they be stopped. The only way I can think of is by boarding anything that enters the area and forcing it away, but how can you stop that.” I’m probably being dumb because it’s probably entirely obvious but I’m not sure in what context you’re asking this. Having said that, and maybe this is not sensible in the context you are intending your question to be seen, but the first thing that occurs to… Read more »

Sanctions only work if the country imposing them is large enough and the world is reliant on them, which means the US or maybe China. I saw maybe China, because the word is not dependent on their currency or access to their finacial markets, not in the same way as the US. For example the EU has sanctions in place but they are generally considered toothless, since it only impacts EU firms buying habits and not the rest of the world and the EU has not enforced against firms for ignoring them, same with UK ones. However my question was… Read more »

I suppose one potential attack method against trade routes in a non-shooting war might be covertly state-sponsored piracy so that friendly vessels are attacked and cargoes intercepted but ostensibly by criminal elements using private vessels rather than by foreign naval vessels. That could be quite effective in disrupting trade routes if malign states enabled more people to get into the piracy business and offered training, funding, performance-based incentive payments and safe sanctuary as required. Sort of a naval equivalent of terrorist training camps & the ongoing support network for trainees. It would also be deniable by whatever states were actually… Read more »

Non-shooting War type actions? What would happen is if you were the embargoing power. You would intimidate or seize ships of powers NOT powerful enough to oppose you. Then offer to stop if the smaller country ends it’s relationship with your rival, starts paying you tolls, and signs an economic pact with you instead. This leaves the more powerful country in a dilemma. Does it intervene on behalf of the less powerful ones even though it hasn’t been directly attacked yet? Gambling that the threats of enforcement are just that threats? Does it do nothing and risk the embargoing country… Read more »

Hi folks hope all are keeping cool!
Difficult to see how Russia is funding such a large naval expansion? The Syrian military campaign coupled with sanctions must be a drain on the economy, vertuly on the verge of bankruptcy. As other posts have pointed out it appears Putin is attempting to match the recent naval advancies of the UK and US. The Russian economy is having an impact on normal Russian public, which pushed to the edge will implode on Putin.
How many of the 26 is realistic fighting naval projective power?

2 of the ships are small corvette size vessels.

You do realise that we actual have a large ecconony, more money, better credit and better shipyards than Russia. If we so wished to we could out build Russian in regards to both quantity and quality.