The aircraft, Embraer ERJ-145, was due to fly to Edinburgh but had to divert to Bournemouth airport after declaring an emergency and squawking 7700 (an emergency code transmitted by the aircraft, you can read more about the codes used here).

The aircraft has diverted to Bournemouth airport. pic.twitter.com/dlo03b7H4Y

The aircraft is now safely on the ground.

Yesterday, another Embraer ERJ-145 operated by Loganair declared an emergency over Scotland after leaving Aberdeen.

Is it the same aircraft? 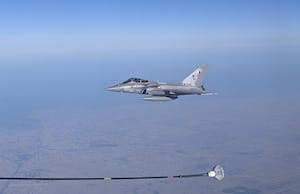 November 21, 2021
Qatari Rafale jets have conducted air-to-air refuelling sorties with a British Voyager tanker during a weeklong exercise in Qatar.