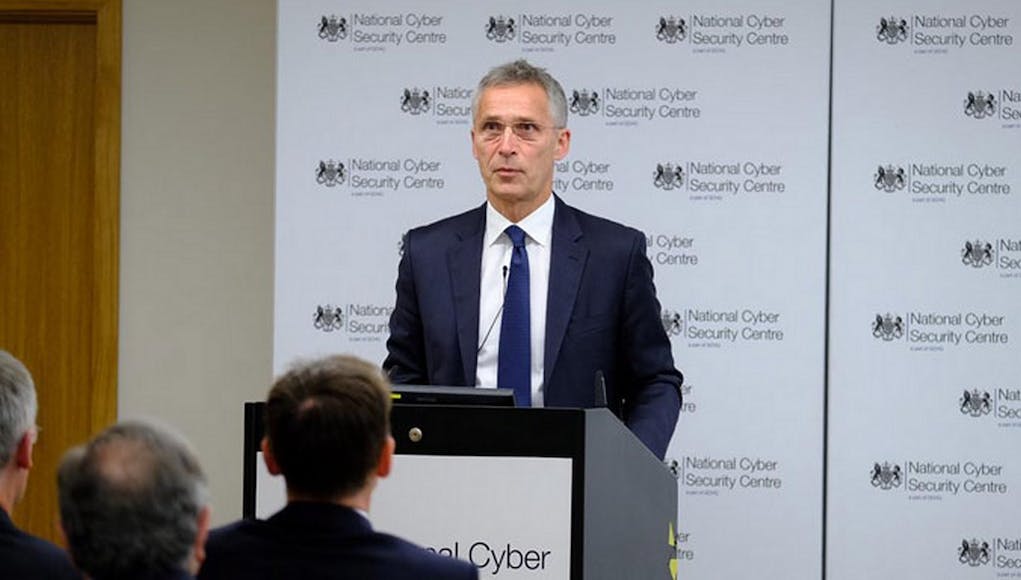 Share
Facebook
Twitter
Pinterest
WhatsApp
Email
NATO Secretary General Jens Stoltenberg addressed a conference at the National Cyber Security Centre in London on how the Alliance is countering cyber threats.
Mr. Stoltenberg highlighted how technologies are fundamentally changing the nature of warfare and that NATO is adapting by strengthening its capabilities and increasing its resources.
The Secretary General said, “For deterrence to have full effect, potential attackers must know that we are not limited to respond in cyberspace when we are attacked in cyber space. We can and we will use the full range of capabilities at our disposal.”
Bolstering cyber defences and resilience will be a top priority at the NATO Summit of Allied Heads of State and Government to be held in London on the 3rd-4th of December.
Stoltenberg said:
“Let me first thank the United Kingdom for hosting this second conference on the Cyber Defence Pledge. The United Kingdom has been strongly committed to the Pledge ever since we made the pledge at the Summit of Leaders and Heads of State and Governments in Warsaw in 2016.And the UK has played a crucial role in making cyber a priority for our Alliance. Hosting this conference here in London, at the National Cyber Security Centre, is a testimony to the strong commitment and the the leadership of the UK in the cyber domain. This Centre is a model for national coordination, bringing together the best expertise to tackle a growing threat.

Ladies and Gentlemen, cyber-attacks can be as damaging as conventional attacks. A single attack can inflict billions of dollars’ worth of damage to our economies, bring global companies to a standstill, paralyse our critical infrastructure, undermine our democracies and have a crippling impact on military capabilities.

Cyber attacks are becoming more frequent, more complex and more destructive. From low-level attempts to technologically sophisticated attacks. They come from states, and non-state actors. From close to home and from very far away. And they affect each and every one of us. NATO is not immune. We register suspicious events against NATO cyber systems every day. And cyber threats will become more dangerous with the development of new technologies. Such as artificial intelligence, machine learning and deep fakes.

These technologies are fundamentally changing the nature of warfare. As much as the industrial revolution did. NATO is adapting to this new reality. NATO leaders have agreed that a cyber attack could trigger Article 5 of our founding treaty. Where an attack against one Ally is treated as an attack against all. NATO has designated cyberspace as a military domain.”

3 Chinooks, 2 Sea King, 1 Merlin, with a Squirrel front and rear have just flown over Haslemere.

D-day (what a relief from the normal response of ‘Brexit’)!

Hmmm. Maybe D Day did occur on 31st May in a parallel universe.

Well, I say that Danielle as at the time of the post we had some flight trials by one or two D-day wing marked a/c down here on the coast, possibly out of Goodwood; but, on reflection and in keeping with classic wartime disinformation, I suppose the whole 70th celebration could indeed be our final attempted solution to the Brexit issue.

Lol yes was going to say.

Yes the white stripes are more in keeping with D Day.

That’s probably why they are using helicopters to commemorate D-Day. Last time I checked, only the Luftwaffe had helicopters flying in WW2.

Ah, but this is the 75th anniversary, Rokuth; I don’t think it’s verboten. If they’re for Trump, they could well end up close to Southsea common, though. Still, time to enjoy this hot weather as it’s close to Guinness o’clock. KRs

It’s the “day after tomorrow” happening, they have just evacuated the royal family.. your going to be knee deep in ice and snow before you can say “Brexit is not a global extinction event so chill”.