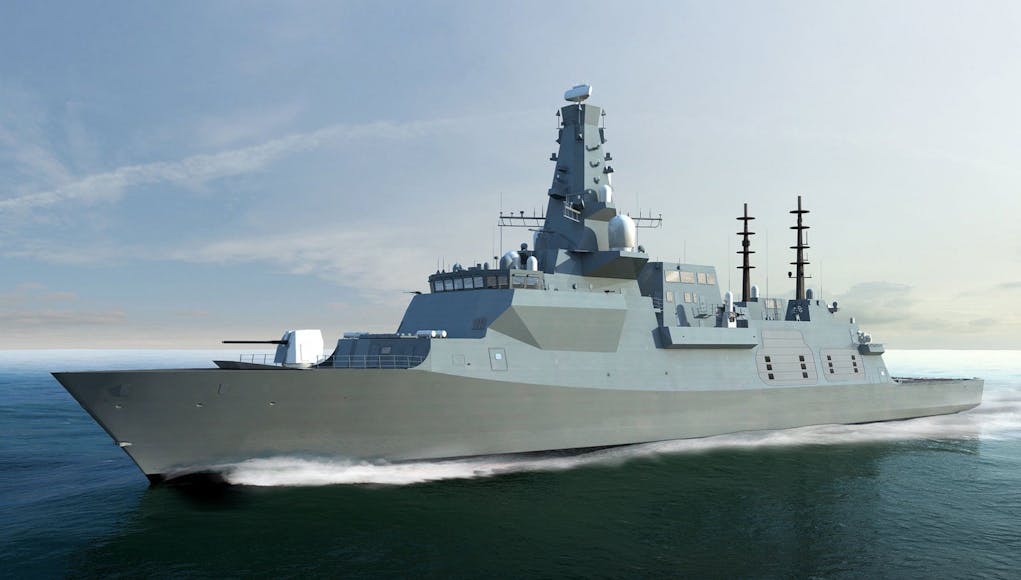 GMB has welcomed the news the first of the new Type 26 frigates will be called HMS Glasgow.

The Ministry of Defence today announced the new ships will be City Class and the first vessel will be named after Scotland’s largest city.

They say in a statement:

“GMB members and their families will react with pride to the name given the historical link and connection with the city that will build the first of the next generation frigates.”

“It is fantastic news, particularly on the day when the steel was cut in preparation for her construction, that the first of the eight Type 26 Frigates is to be named HMS Glasgow. The name itself historically goes back over hundreds of years with previous ships carrying the same name having served with distinction over many battles and two World Wars.

The last ship to bear this name having been involved in the 1982 Falklands conflict. It is particularly significant for the people of the city of Glasgow, given this is where the first ship will be built. But more than just the name itself, the use of British steel to build these ships is something we have been continually pushed for. “It means these frigates will be a true benefit to the UK economy and our industries as well as the Navy. Given that the frigates will be known as the City Class, GMB also looks forward to other great cities across the United Kingdom names adorning future frigates in this class”.”

Defence Secretary Sir Michael Fallon said today at a ceremony on the Clyde:

Eight Type 26 Frigates are to be built in total, the contract for the second batch will be negotiated in the early 2020s. Ordering in batches is common for projects of this size around the world and was last seen with the Royal Navy for the Type 45 Destroyers and recent Offshore Patrol Vessels. The Type 45s first batch order was for three vessels for example.

Backed by a rising defence budget and a £178bn Equipment Plan, the Type 26 programme will bring vast economic benefits to Scotland and the wider UK. The contract is structured to ensure value for taxpayers’ money and, importantly, now designed to protect them from extra bills from project overrun. The investment will secure hundreds of skilled jobs at BAE Systems on the Clyde for the next twenty years, and thousands of jobs in the supply chain across Britain.”

We will continue to invest in our technologies, productivity and people to help us deliver these ships to the highest standards. Today we have five River Class Offshore Patrol vessels at varying stages of construction for the Royal Navy across our shipyards in Glasgow and we look forward to starting manufacture on the first Type 26 ship in the coming weeks.”

If they build more than 8, I don’t mind if they are named after famous boy bands.

Pacman27
Reply to  Will

With the correct armament one of them could be called…

Rob
Reply to  Will

Given the hole the much vaunted £178bn budget I think they may reduce hull numbers again, the last in the class would thus be….

Fallon forgets to admit that the only reason the defence budget is growing is because he and his pals at the Treasury are stuffing the budget with items that don’t provide any defence to the UK. Gordon Brown started this practice, George Osborne added to it with great glee and the present muppet Hammond is just piling on. Fallon is a prize boot licker who keeps his job by going along with the corrupt Treasury tactics without complaint. Dereliction of duty. He’ll be rewarded with a lordship when all is done. The Tory back benchers that claim to be defence… Read more »

HMS Exeter would be very nice

Good news; better late than never I suppose.
There is widespread agreement that we should be building Type 31 in parallel with Type 26. I would love to know why Type 31 isn’t just Type 26 minus the Chinook flight deck and MT 30. Can any naval architects out there tell me why we are faffing around with completely new designs.

TH not your money. Our money. You have to be working and paying taxes to be allowed to say it is our money.
Got a job?

Probably not. After all it takes time to come out with such well thought proposals like scrapping the navy in favour of patrol boats. Plus saying T26 is a waste of money while giving examples of Germany and Norway as countries who don’t have them and don’t need them. A simple Wiki search would tell him otherwise!

I have to admire your persistence at posting about cutting defence spending on a site like this. Hardly anyone will agree with you, if any, but carry on it makes good reading!

@TH I actually think we can get better value for our taxpayer funding of the military and to that end I agree with you. Where I disagree with you is that this has to be achieved by ripping the heart out of our forces. As with many government departments the MOD is opaque in what it is spending its money on and in many cases the numbers just do not add up – so from a taxpayer alliance perspective you have a point. A fleet of Safeboats Mk6 boats (say 32- 64) at a cost of £6m each will indeed… Read more »