Sikorsky and Boeing have provided the first look at the SB-1 DEFIANT helicopter being pitched for the US Army’s Joint Multi-Role technology demonstrator programme.

The Defiant is designed to fly at twice the speed and range of most conventional helicopters and will help inform the next generation of military helicopters as part of the US Army’s Future Vertical Lift programme.

The timeline for the first SB-1 Defiant flight has slipped several times. Originally scheduled for 2017, delays arose due to a requirement to implement automated fiber placement blade manufacture at the request of the US Army. 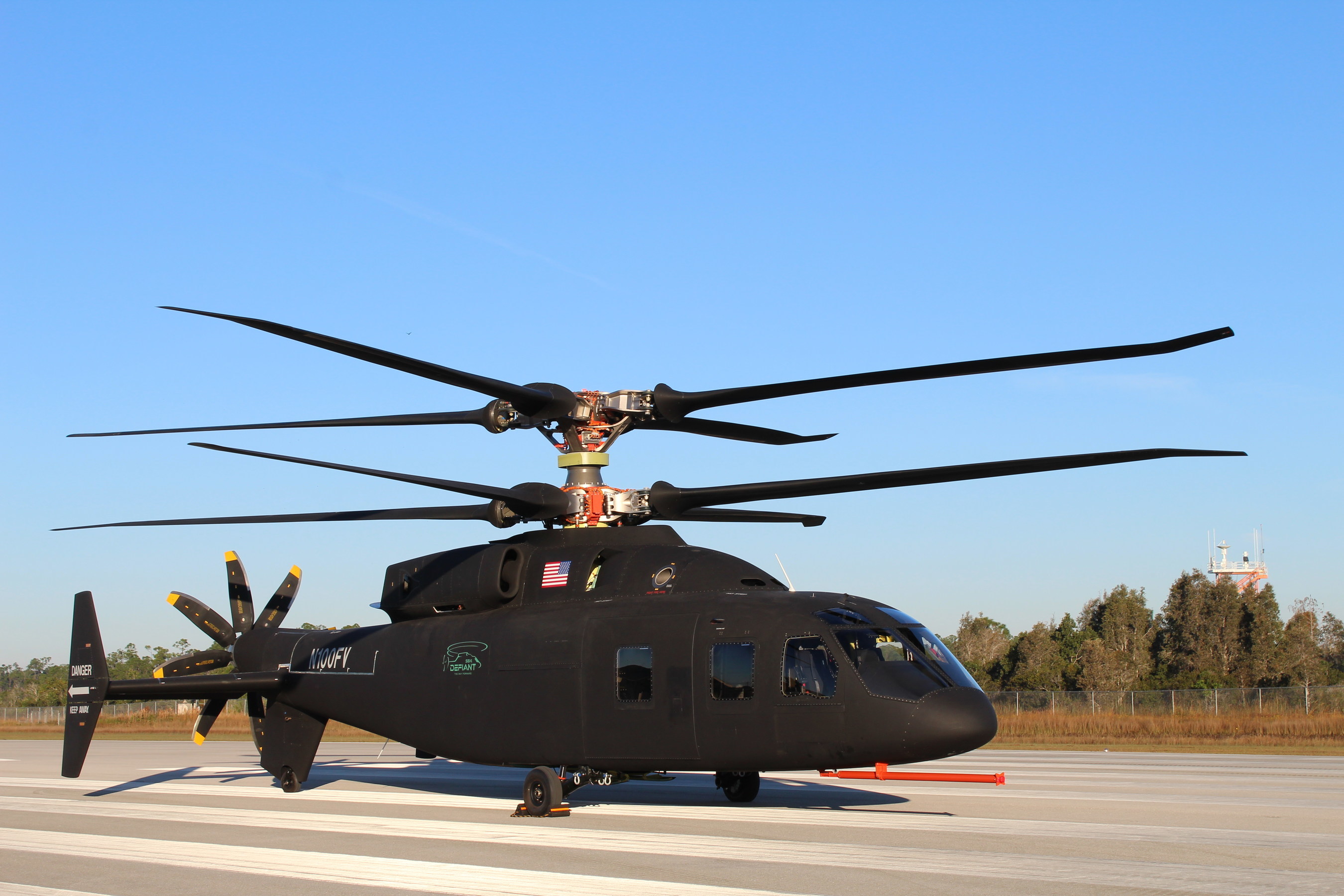 Further delays resulted in the first flight slipping past summer 2018. Dynamic systems like turboshafts, transmission, and rotors were scheduled to be tested at West Palm Beach, Florida, by the end of October 2018, before ground runs in November, then first flight to reach 200 knots within six months.

The first flight will take place in early 2019.

Is there any reason this prototype could not be flown autonomously for initial flight tests. Surely, using this method would check the basic procedures without putting a crew at risk?

Army requirements mandate manned test flights throughout. The US Army is still weary of purchasing things companys are not wiling to shove a test pilot in.

It would have had years of simulator testing before it even got to the tethered hover tests, which would have been done remotely. Putting a pilot in will still give the best impression on how the aircraft responds to flight control inputs, which today will be governed by the flight control software and not the mechanical controls. For an example how do you want the aircraft to respond to a quick left input on the cyclic. Do you want a fast or gradual response, if the aircraft is targeted at display pilots etc then a fast response to a general… Read more »

I can’t make my mind up if this thing is an ugly duckling or a beautiful swan!

Interesting design, but it does seem like an overly complicated Thunderbird style design…

I think its less complicated (and less expensive) than those tilt rotar designs yet its pretty close in terms of performance. The arm needs to be able to transport troops at much higher speeds than is currently available with the traditional helicopter design. They are to easily shot down by unsophisticated unguided small arms.

I still think the US are barking up the wrong tree with both the SB1 and V280 Velor. Both aircraft are overly complex and I suspect not very battle-worthy. By being battle-worthy I’m talking about how robust they are to battle damage and the speed at which they can be returned to duty. A good example of a great helicopter, but not very battle-worthy is the Merlin. Because is uses a composite upper structure makes it difficult to repair. The SB1 and V280 will be using a lot of composites to ensure weight is kept to a minimum, this will… Read more »

I am not sure how the aircraft is configured during flight. However if they off set the blades then it could drastically reduce the drag. The Bell X-2 seems to have proven the design over a number of years so I don’t think they would have got to this stage if the X2 had not proven to have advantages.

Another armchair expert who thinks he knows more than the people at Sikorsky and Boeing who have been designing and building helicopters for 80 years. I suggest you write the Secretary of the Army and offer him your services. I’m sure he’ll jump at the chance.

Correct, its what I do for a living these days. PS – Already done that through Leonardo, no additional cash unfortunately. The computer flight modelling was very promising for a winged variant of the Merlin ala Airbus X3.

I don’t know anything about helecoptor design or engineering, however my issue with the airbus X3 is the propellors on the side of the frame right next to the side door is a risk for troops boarding and onboarding the aircraft. Someone’s head is bound to end up chopped off which is why boeing/Sikorsky opted for an alternative design.

Airbus seem to agree with you and interestingly, considering other comments regarding aspects of it (and the Defiant), new projections of the X3 follow up proposal incorporate pusher props and a modified biplane-esque wing arrangement in a V arrangement with the engines at the point of the V. Canards allowing further rearward location of the wings have also been considered it seems, though it looks like this new configuration supersedes that idea.

Now we all know, thanks I think I understood most of what you wrote.

Screams “Special Operations Airframe” to me…

The bell tilt rotor will be superior to this both in range and speed. Bell claims to have solved agility issue. Will be interesting to see if they have. Supposedly de risked new one by only tilting propellers. On osprey whole engine tilts too.