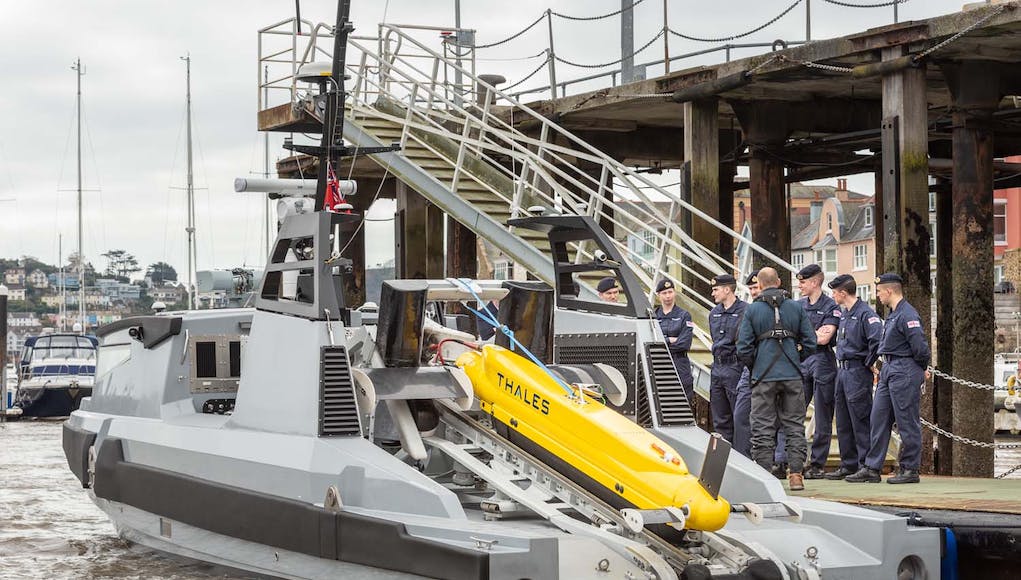 The company has turned part of the Royal Marines’ old 539 Assault Squadron base at Turnchapel in Plymouth into a maritime technology centre for developing unmanned boats and submersibles.

The trials team took a break from those tests to demonstrate Apollo to Officer Cadets (pictured below). 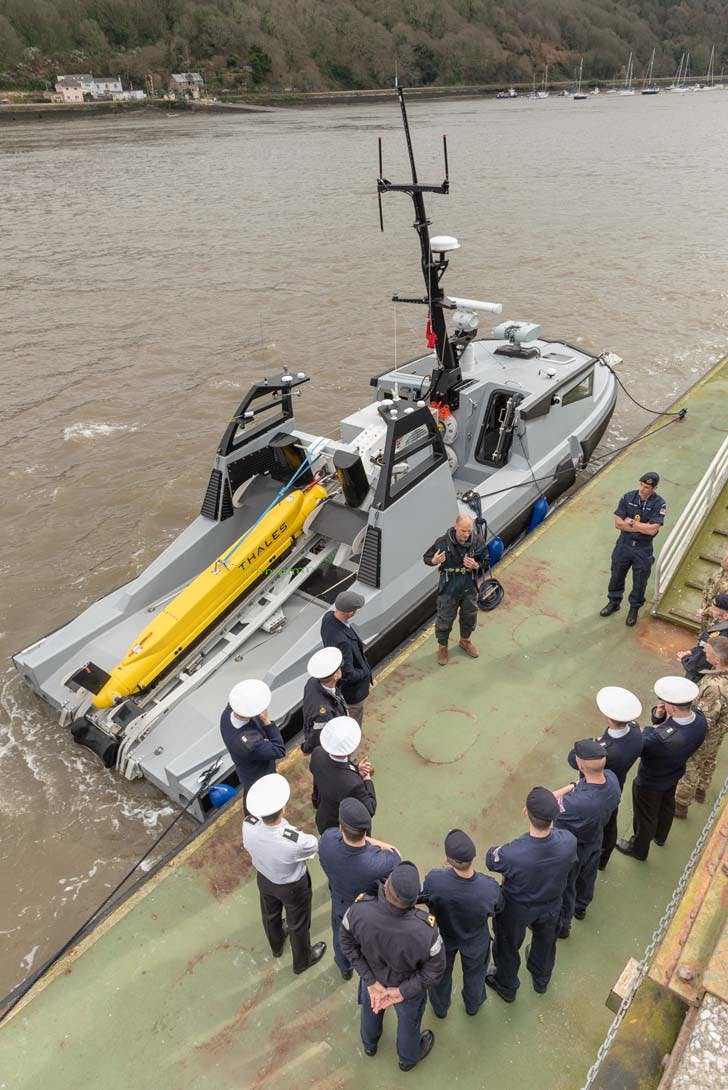 John Hunnibell, trials manager for Thales at Turnchapel, explained that Apollo was the the first of a kind of vessels “capable of detecting, classifying and disposing of mines and bombs at sea – without having a human operator anywhere within a minefield”.

Thales say that not only can Apollo be programmed to search for mines in a specific patch of water – and neutralise any explosive devices it finds in that stretch – but it is designed to avoid obstacles or other vessels operating in the same waters.

“It’s being trialled and tested right now on the doorstep of their college – emphasising to them the degree of development in maritime autonomy and the very real prospect of them operating this equipment in the course of their careers.”

Would be great having these on a frigate/ destroyer or carrier.

Yes, but what sweeps for mines for the mother ship? Before it can deploy these?

They should not come at the cost of our MCMV, which are being whittled down ship by ship, over an extended period.

Why the nostalgia for the Hunt and Sandown classes if modern USV and UUV based mine countermeasures prove more capable, faster, more flexible, and safer for ships crews than the classic approach of putting the ship in the minefield? Such solutions may be deployable by just about any surface craft including OPV, T31, T26, RFA or assault vessel, or no vessel at all if shore based; and in the form of ISO mission modules could be rapidly flown to a location to equip a general purpose ship, say a T31, already on location. The BMT Venari-85 concept illustrates this, albeit… Read more »

Thanks for that explanation GHF.

I would have thought a combination of the two but what do I know, the possibility of more T31 certainly appeals.

Im no doubt being influenced in my head by numbers and the thought that the MCMV fleet has on occasion acted in the Fisheries role as well.

Sweeps are hardly ever done now. Mine hunting is the norm. You don’t send a Hunt or Sandown into a minefield anymore, they’re just too complex a threat. The ideal replacement for the Hunt and Sandown is a ship like the Venari 90 or better still the original Venator 110 from BMT that can deploy vessels like these and other unmanned assets and stand off the threat.

The drones go ahead of the ship to hunt for mines…

The idea is you would put a couple of these on the Type 26.

I’ve spent enough time in small boats to know that things go wrong, ropes jam and kit doesn’t work the way it would on a bench in the factory. These vessels may be intended to operate for extended periods unmanned but my bet is that they will spend most of their time bobbing around, waiting for a repair crew to turn up and fix something that a crew member could have avoided, or fixed in a couple of minutes. Worse things happen at sea.

its a plot, they are refining the tech on these wee boats so when the type31 arrives on the scene they will be configured as a large scale UAV. Thus saving money crew wages etc

Ok this is a demo…but there is a lot of extra work to do. Ignore the new shiny electronics and look at the boat. No lifting eyes or sign of any recovery method. Making a boat do remote control is relatively easy. go to your local boating lake lots of remote control boats on there. Recovering and launching a boat is not easy , especially in a sea way or roughers. Heck it was bad enough putting a combined influence sweep out on a Hunt in the days of sweeping. Big heavy items on cranes swinging around whilst you get… Read more »

Thank you for the explanation.