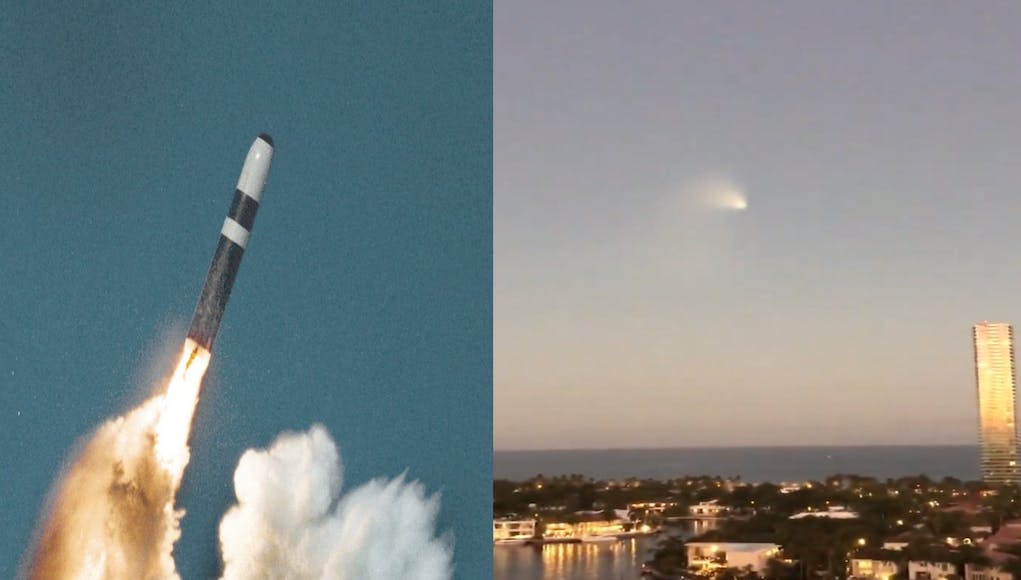 The launch didn’t go unnoticed in Florida after the public noticed a ‘comet like’ streak in the sky.

It is unknown which navy launched the missile, the US Navy or the Royal Navy.

A Trident II SLBM has been tested off the coast of Florida
pic.twitter.com/9RubqNOZTf

The missile followed a similar path to the ill-fated Royal Navy launch some years ago.

Looks like a potential #Trident-II #SLBM test is upcoming in the Atlantic between Feb 9 and 14.

Originally developed by Lockheed Missiles and Space Corporation, the missile is armed with thermonuclear warheads and is launched from nuclear-powered ballistic missile submarines.

Testing the missile or testing the new tubes going into the Dreadnought and Columbia classes?

When i was based on Ascension Island (6 month tour) the Yanks carried out a couple of Trident tests where the missiles came down in the water near us. During the week of tests, we played host to a huge influx of yanks (C17s.Hawkeyes and Orion’s), they declared a huge area around the Island as out of bounds to all traffic (Not that we received many visitors) and then they would test their missiles which were always around 11 pm . A group of us from the Mess, would jaunt up to the BBC bar at Two Boats and sitting… Read more »

Friend of mine is now doing a married accompanied (!!!) to Ascension. They are loving it. It probably helps they are also avid sports divers because there is not much else to do.

Spent a few good nights at the BBC Bar in 2 Boats back in Sep 88 – Mar 89. My Fav was the Yank bar drinking B52’s and other liquid refreshments, ooh yes and working now and again

My guess would be a Redcoat missile since their last launch ended in failure.