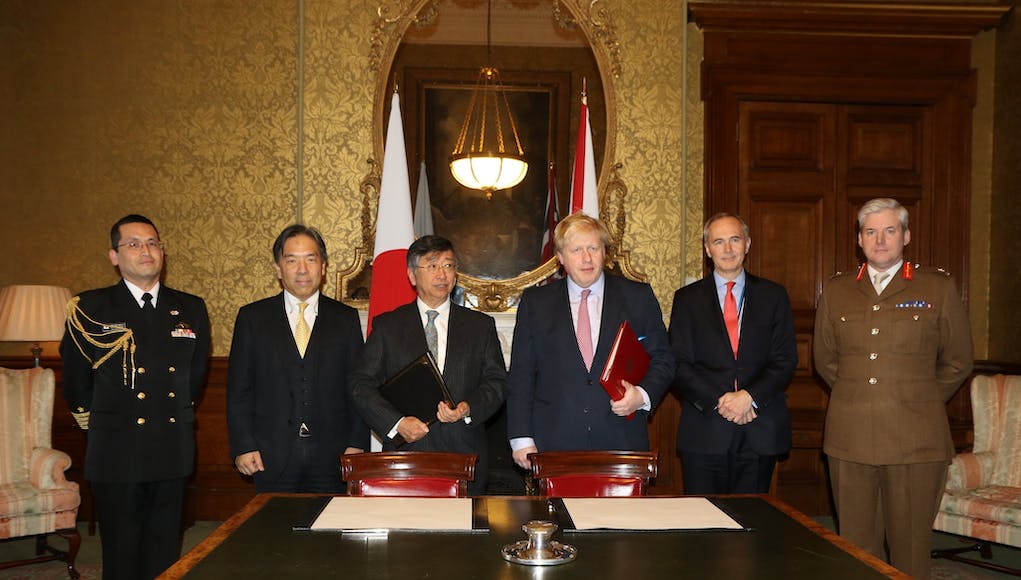 The Defence Logistics Treaty was signed in London today ‘to make it easier for our Armed Forces to work together on a range of activities’, including UN peacekeeping operations and joint humanitarian aid and disaster relief missions.

According to the MoD, the agreement includes practical arrangements that will allow both ‘countries’ forces to share equipment, facilities and services in a simpler and more efficient way’. It reportedly covers the exchange of supplies and services, removing the need for individual agreements on a case by case basis.

“The UK is working together with Japan as our closest security partner in Asia to promote global security, stability and prosperity. As two leading supporters of the international rules based system, this close collaboration between our forces will help support collective efforts to tackle international and regional challenges and threats.”

“Japan is an important British ally and this treaty will enable closer joint work on operations and exercises, including sharing equipment, supplies and services. As Global Britain steps up, we will continue to stand alongside our Japanese friends to meet shared interests and challenges.

This agreement underlines our commitment to tacking international threats which makes Britain safer and more secure.”

“This treaty marks a significant moment in Japan’s security and defence relationship with the UK, Japan’s close partner that shares fundamental values such as the rule of law and democracy. The two countries will work together on security cooperation, as well as other global issues in this changing world.”

“The Defence Logistics Treaty is also referred to as an Acquisition and Cross Servicing Agreement (ACSA). It was a commitment of the second 2+2 Foreign and Defence Ministers’ meeting in January 2016, when Japan also agreed to host RAF Typhoons in October 2016 in an historic joint air force exercise – the country’s first ever with a military partner other than the USA.

UK-Japan defence and security cooperation is going from strength to strength. The UK and Japan continue to develop new defence technologies, with a particular focus on missile technology. 2016 also saw our cooperation in third countries expand from South East Asia to Africa.

As Japan prepares to host the 2020 Olympic and Paralympic Games, our cooperation on cyber security is also expanding. Japan’s Olympics Minister, Tamayo Marukawa visited the UK in January to discuss the UK’s cyber expertise from London 2012 and the UK’s experience of crisis preparedness in managing large sporting events.”

Last year it emerged that Japan and the UK are moving forward with efforts to develop a new joint air-to-air missile.

The project is understood to be supported by a successfully conducted project to integrate Japanese seeker technologies into MBDA’s Meteor Beyond Visual Range Air-to-Air Missile, IHS Jane’s has reported.

The project utilises Japanese technologies to enhance the accuracy and performance of the missile.

Meteor is an active radar guided beyond-visual-range air-to-air missile being developed by MBDA. Meteor will offer a multi-shot capability against long range manoeuvring targets in a heavy electronic countermeasures environment with range in excess of 100km.

MBDA is planning integration of Meteor on the Lockheed Martin F-35 Block 4. The Meteor has already been checked for fit in the internal weapons bays of the JSF. It is compatible with the aircraft’s internal air-to-ground stations, but would require modification of the fin span and air intakes to be compatible with the air-to-air stations.

Following the success of the first round of talks on the Co-operative Research Project on the Feasibility of a Joint New Air-to-Air Missile (JNAAM), the Ministers have confirmed discussions would move to the second stage.

Further additional cooperation could, according to a MoD press release, include mine hunting in the Gulf; cooperating to improve amphibious capability; and improving counter-IED (Improvised Explosive Device) capability. The UK also welcomed increasing Japanese participation in NATO exchanges and joint exercises.