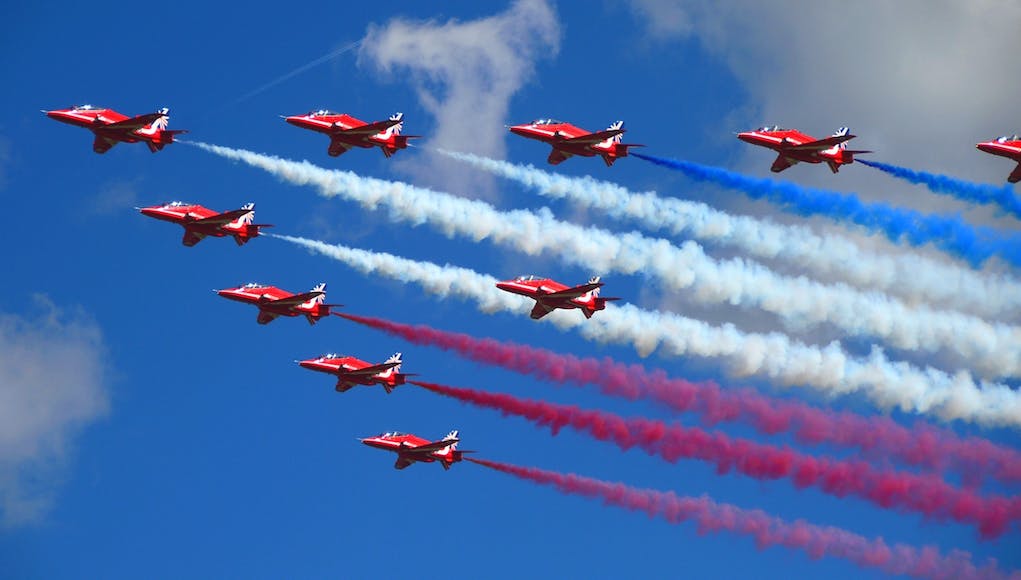 A report measuring economic, diplomatic and cultural clout has named the United Kingdom as the worlds top soft power.

The UK was followed by France, Germany, the United States and Japan. Canada, Switzerland, Sweden, Netherlands and Australia rounded out the top 10.

The UK’s first-place finish was a “surprise” given how the negotiations for Brexit has had “little tangible progress”, the report wrote. As such, there are “huge question marks” over the UK’s future relationship with the European Union, its long-term global influence and its role in the world.

“Moreover, should the exit be a chaotic one, it is hard to see global public opinion on the UK remaining buoyant,” it added.

“The UK edges out France – only just – to take the top spot in this year’s Soft Power 30 index. The UK’s return to first place will no doubt come as a surprise to many analysts, commentators, and diplomats.

The past year has seen Brexit negotiations dominate headlines and consume virtually all of the government’s bandwidth with
little tangible progress made. As a result, there are huge question marks over the UK’s future relationship with the EU, its long-term global influence, and its role in the world. However, as of July 2018, the UK remains a member of the European Union, and thus nothing has changed in the objective data with respect to the
UK’s position in Europe.

For the UK, this year’s results are an encouraging sign that the nation still commands significant soft power clout. The UK’s soft power strengths continue to sit across the Engagement, Culture,
Education, and Digital sub-indices.”

Regarding the UK position, the report concludes:

“Where the UK goes from here is anyone’s guess. It is not clear if HM Government has a compelling vision for what Britain
will look like in five years’ time. Much remains to be done if the calls for “Global Britain” are to amount to anything more than a slogan.

Intent must be matched with sufficient funding and resources, lest it become an empty branding exercise.

The UK can only rely on the success of the GREAT campaign for so long. As we approach March 2019, all of the as-yet-tobe-
answered questions on the UK’s future relationship with Europe and its role in the world will have to be addressed.”

Meanwhile, the US slipped one spot to be ranked fourth, due to “detrimental effects” of the Trump administration’s protectionist and nationalist approach to foreign policy, the report said.

“Last year, a very sharp decline in global perceptions of the US was reported in the polling data whereas this year objective metrics have also registered the erosion of American soft power,” the media release wrote, citing an “obvious fall” in the government category from twelfth to the sixteenth position.

The ‘Soft Power 30’ index, first launched in 2015, measures a country’s soft power via objective data on six categories, such as government and culture, and international polling on seven other indicators.

It was produced by communications consultancy Portland in partnership with the University of Southern California Center on Public Diplomacy. A copy of the report can be found here.

Jolly good. Does not surprise me that the UK is still somebody despite the naysayers.

As a legacy of empire the UK has extensive cultural links with the Common wealth and Anglosphere, including historical ties with the Middle East.

Add to that the English language, P5 UNSC status, and our oversees aid money.

Blair’s folly going into Iraq will have cost us diplomatically but nothing we cannot recover from.

Brexit needs to be pushed through cleanly now and a renewed effort made to engage and trade with historical partners and new expanding markets worldwide.

I’d add to that the photo of the Red Arrows. All part of soft power and putting the UK brand out there.

Now get a Royal Yaught sorted and I also recall Soles suggestion of a proper VIP transport aircraft for The Queen in Royal colours.

(Chris H) – Totally agree about how we are still No 1 in Soft Power (not that some here understand just how crucial that is) Daniele. HM is well catered for with a Helicopter and a BAE 146 done out for her. I think a Royal Yacht after 16 years of counting pennies to get the deficit down wouldn’t play too well. Nice idea though as Britannia more than paid her way. Always thought the VIP A330 should have been done in the old RAF VC10 colours of white top silver lower and blue lightning stripe with ‘UNITED KINGDOM’ along… Read more »

Spot on with the last paragraph Chris.

Agree many would complain about a Royal Yaught but I’m disregarding costs and looking purely on soft power symbols and getting the UK brand out there. There could be numerous examples.

As an example love or hate them why do so many billions worldwide tune in to see the pomp and ceremony around the Royals? Some things we do very well and great state occasions around them are one example. My Italian relatives are captivated by it all. And they make a profit.

(Chris H) Daniele – the Monarchy is something we have got VERY right. How many Heads of State can say they chip in some £300 Mn of their own Estate’s money to their Nation’s Treasury every year. Let alone what is brought in by tourism. And they aren’t even paid! Its also why despite the political argy bargy of party politics we actually have a pretty efficient legislative system. One elected and supreme body, one advisory that can be overruled and a non political Head of State. The key being that HM is also the head of the armed forces… Read more »

Brilliantly i would think. Trooping The Colour is a sight to behold. And operational troops too rather than purely ceremonial.

Even a recently retire RN Commander did not know that Procedue Alpha (crew lined up to enter port) derives from the very real need to show that they were not actually manning the guns.

another Brittania can only be a good thing, the old one I believe made 100s, if not more, of trade deals and brought in billions to the economy, as for the A330, I do think the VIP one needs to be painted to something slightly more bright for sure.
If not a yacht, a fully fledged hospital ship in the correct livery would be great, it could stay deployed for years visiting every third world country that accepts help, it would put a good face to UKaid.

Keithdwat which ships would you decommision to provide the crew for a new Royal Yacht ?

well if it means decommissioning other assets for this then forget it, but surely if there was an increase in personnel to crew all other assets and then some. This is by sure a luxury but a good luxury at that!
besides how much crew do you need, its not a sophisticated piece of kit, you could have reserves to help crew it as well, but there are other priorities that need to be sorted long before this.

(Chris H) barry white – possibly because we, as a country, cannot exploit this unique position and therefore reach our full potential inside the EU? How can we be when we have no control over our laws, borders, trade policy, tariffs and VAT rates (to name a few)? Indeed its obvious that the EU don’t like us because we still have huge clout internationally

Hi Daniele,
I’ll make it simple and say I agree with everything, especially your second point. How much would it really cost us to provide a new Britannia and a decent ‘plane. We could probably get the private sector to come up with some of the cash and crewing the yacht…regulars obviously but cadets and/or Princes Trust youngsters. What an opportunity.

Yes Geoffrey I recall you’d suggested alternative crewing options like that before. I agree.

Absolutely laughable, just watch and see how far fluffy power gets us next time the EU,China or the US decides to bully us. Putin chose us for chemical welfare attack because he thought that he could get away with it just like last time.

Yes but Grubbie are you not ignoring the subject of the article?

What would you have us do in those situations you mention.

Bomb them? Start WW3? Impose sanctions? Walk out the UN in a huff?

The UK is a medium power not a super power.

I agree that military power has its place. “Speak Softly and carry a big stick ” and ” If you want peace prepare for war” spring to mind and I agree with them totally.

Both soft and the ability to deploy military power if needed are equal IMO.

Have to say am sick and tired of ‘experts’ whining on and on about how brexit will be. Could they shut the flip up please. We ‘ve heard it all before so many times. Anyone remember Y2K ?

(Chris H) Daqvid Streeper – It won’t stop because Project Fear Mk II is all the Establishment Remainers have left in their declared intention to thwart the will of the electorate. If you want to see the elaborate and daily feast of misrepresentation, pure guesswork and downright lies go to the BBC News Channel. And then go to HYS on any current story. You won’t have to look far – Auntie Beeb runs at least two anti Brexit stories every day.

It doesn’t surprise me that we are still number one. A decent PM would be leverage our latent potential. The trouble is our current ‘leadership’ sees itself a ‘sub-command’ of the EU. Look what happened during the ‘Ukrainian crisis’ Cameron trooped to spoken to by the French and Germans along with all the second tier government leaders. Yet as one of the P5 and Europe’s principal (it could be argued) military power we should have been in there with France and Germany. There seems to be two UK’s. The EU one which is servile to German. And then a real… Read more »

….and France and Germany achieved what exactly?
….and as for the German military, which motor bike did they send?

Never said they did anything good, bad, or indifferent.

The point was as one of the EU’s big three we should have been leading and steering and not treated the same as Belgium or Spain or Portugal waiting to be told what was happening. It was evident from Cameron position he saw us as followers. Yet when it suited him told us we had influence. If we had any influence that would have been time surely it would have shown.

The whole Ukraine debacle was an utter farce.

Oh dear. More self delusion.
We can talk softly but we certainly don’t have a big stick.
We prefer to bribe other countries like India and China with taxpayer funds, whilst there is murder on the streets, and our MP’s sit quietly and say and do nothing.

No different than any other country then

We actual do have a good number of big sticks. Course we can’t go and punch out another world power or decent regional power like some modern day Napoleon (why the hell do we need that level of armed forces anyway), but no other nation apart from the US could do that and even they would struggle against the second tier world powers and really top end regional players ( UK, France, China, Russia, Israel, Japan etc). Not that I can see anything like it happening in the short to medium term, But if we ever had a hot war… Read more »