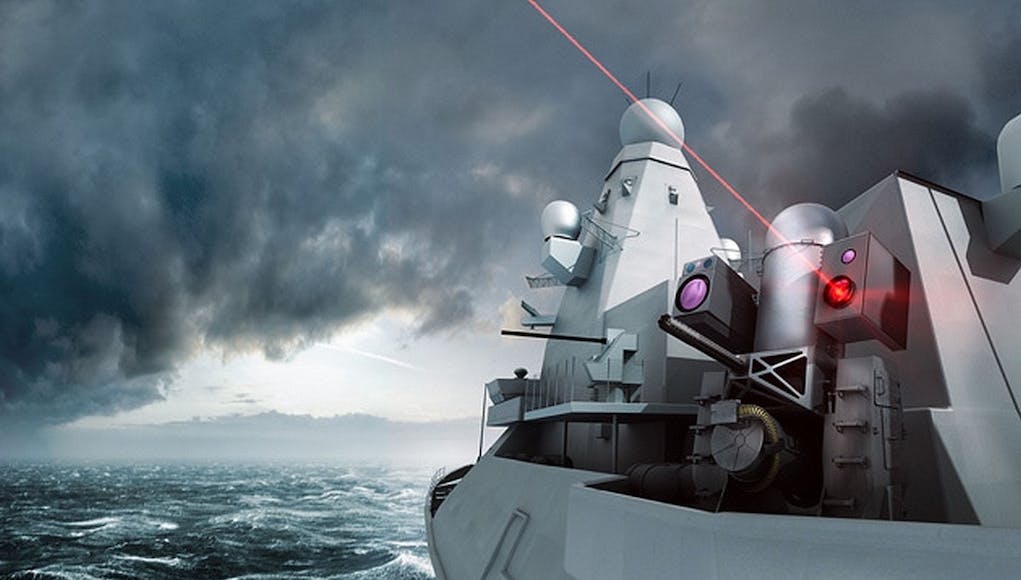 A system based on Le Mans motor-sport technologies has been developed for Royal Navy ships, say the MoD.

The Ministry of Defence say that the project has demonstrated the capability to manage the energy demands of novel future capabilities such as the Dragonfire Laser Directed Energy Weapon (LDEW) currently being developed by Dstl & industry.

“The Flywheel Energy Storage System (FESS) uses innovative high-speed & lightweight flywheels to provide high-power electrical pulses that these future systems require, reducing the impact of these systems to the rest of the ship, while avoiding the widely reported safety concern around battery-based systems.

Fundamental to the success of the project has been the collaborative testing of the FESS at both UK and US facilities. This was undertaken under the Advanced Electric Power and Propulsion Project Arrangement (AEP3), an arrangement between Dstl and DE&S in the UK, and NAVSEA’s Electric Ship Office and the Office of Naval Research (ONR) in the USA. USA testing was also supported by US Coalition Warfare Program (CWP) funding.”

According to DSTL, both nations utilised a Power Hardware-In-the-Loop (PHIL) approach, where a ‘real’ FESS was integrated into a virtual ship power system emulating a RN ship operating in real-time.

“This approach offers a cost effective way to develop the hardware and de-risk its integration into a real ship, as well as to develop control and operating approaches.”

“This technology was originally developed by the Williams F1 team and was brought to us for potential use in Defence. We saw an attractive option to bolster defence capability through the provision of more robust and futureproof power systems for naval ships. The development of FESS and the close working we have achieved with DE&S, GKN, PNDC and our US partners has now provided a significant addition benefit in the development of real-time modelling capability and PHIL testing facilities at PNDC.”

This work forms part of a planned wider de-risking activity to enable the RN to successfully integrate future energy intensive loads. While the US has previously used its own laser system at sea on the USS Ponce.

A positive step in the right direction, with future testing later this year.
Let’s hope we get to see these in sufficient numbers to cater for all of our warships.

Sorry if i am being naive, i am no expert, but i have my doubts about all this laser trend.
Firstly it requires a lot of energy so not great for mobility, although not a problem for big ships, much harder for land and air vehicules.
Secondly aren’t lasers easily countered with reflection / deflection , ie a mirror?

In short it isn’t that simple by any stretch.
But even if it did, you would still have forced an enemy to adapt their existing weaponry/vehicles or purchase new to negate the threat, which is often as useful.

True but it depends on cost. If your weapons system costs millions even billions to develop but can be countered by much cheaper system, then you will lose because it becomes unsustainable over time. That is why Reagan’s Star Wars initiative failed. Too expensive to deploy and would have drained state funds
In my mind the best defense is a good offense. Things like the maginot line are doomed to fail. So it makes more sense to invest in things like trident or cyber/electronic warfare
My 2 cents

As I mentioned in an earlier post lasers are inherently inefficient. However, the best recent development has been in high power solid state lasers. These are at least 10 to 15% more efficient that a gaseous laser. Also they have the benefit of being able to fit in a much smaller package. The gaseous lasers can generate and handle much higher powers however. Both Kratos and MBDA are developing multi coherent array lasers (Laser Weapon System and Dragonfire). This is where you use a collection of solid state lasers and then focus them together on a target. Both of these… Read more »

Thanks for info, that was helpful. What about mirrors or reflective surface as a counter, Is that even possible? I am just a layman wondering

Mirrors don’t reflect 100% of the light hitting them. So, energy can still be transferred to the mirror, and subsequentially melt it.
See: https://physics.stackexchange.com/questions/70698/will-high-power-laser-penetrate-mirror

Its more of a thermal punch effect, a kinetic effect from rapid heating, rather than sustained energy to melt/pierce the target. It means a reflective surface would diminish but not entirely negate the effect, and of course adding a reflective coating makes your weapon easier to track.

Well put. I wasnt’t suggesting that the target itself would melt, but rather the mirror would denature and would thus be less effective at reflecting light.

Unless the mirror like coating is internally cooled the laser will still induce heat onto the aim point. If the coating has a >95% reflectivity then the majority of the laser (+energy) will be reflected. However, as this coating is not 100% reflective and is not internally cooled, the spot where the laser is aimed at will heat up significantly. If the laser is pulsed, it will cause a thermo cycle to be induced in the mirror and airframe. The pulse repetition frequency will be in the nano seconds. At some point the coating’s reflectivity will go opaque and more… Read more »

Sorry If I’m being naïve, but I have my doubts about this dreadnought trend.

reflec or ablat will work against lasers. Also, lasers won’t destroy submersibles I believe. The torpedo is looking really good since Luke Skywalker.

I think there is still a lot of research to be done before they become as common as a Phalanx, but it is all forward progress. And flywheel systems are not new, there was one in the Matapan in 1973, when she was the trials ship for sonar 2016, and an experimental low frequency sonar. Mind you that weighed tons, Formula 1 engineering it was not!

Super Capacitors made with Nanene (proper Graphene) will ‘knock the socks’ of flywheels in the near
future AND be safe ! (unlike lithium batteries)

USS PONCE? I REMEMBER THAT, DOES ANYONE KNOW IF THAT SYSTEM WORKS.

The US Navy claims it performs well enough to be a operational weapon system.
https://www.military.com/daily-news/2014/12/10/navy-declares-laser-weapons-ready-to-protect-ships-in-persian.html?comp=7000023468025&rank=1

Interesting article confirms what I suspected that the system is closely tied in to other defence and detection systems on the ship being used to detect targets at a considerable distance and track them as well as destroy them. I think it will eventually become a very flexible system able to give awareness of threats, analyse them, and enable whatever defensive measure(s) are best suited to intercept and destroy them with back up options no doubt should the first attempt fail. This will potentially give ships much enhanced defensive capabilities that will equally enhance its deterrence effect too. Only the… Read more »

Lasers are the way forward, not as an offensive weapon system, but as a defensive system they could become 100% effective. Power generation and output is still an issue and will be for a number of years, but once that problem is solved the future for laser systems is bright (pun intended) Its even possible to envisage lasers of sufficient output being used as a shield. Its easy to draw shapes and images with lasers, my laser at home can be programmed to create a net, so once the power issue is fully resolved a laser becomes the most versatile… Read more »