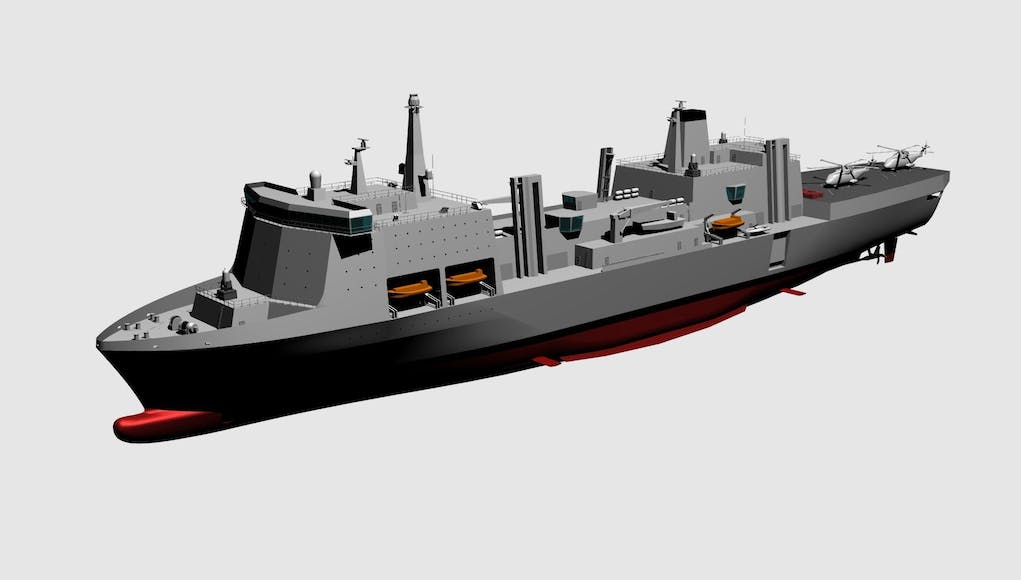 Union GMB has called on the government to use Rosyth and other UK shipyards to build three new solid support ships for the Royal Fleet Auxiliary.

“The best thing the Tories can do now not only for our Scottish shipbuilders but also shipbuilding as a whole, is to ensure the Royal Fleet Auxiliary vessel contracts are awarded to our yards under a work-share programme, which would see the likes of Rosyth primed to benefit.”

Four 37,000 tonne Tide class fast fleet tankers are currently being built in South Korea by Daewoo Shipbuilding & Marine Engineering for the Royal Fleet Auxiliary under the first phase of the Military Afloat Reach and Sustainability (MARS) project. The ships will provide fuel, food, fresh water and other supplies to Royal Navy warships, and are projected to enter service at a rate of about one ship every four or five months from September 2016.

The Strategic Defence and Security Review 2015 confirmed that three new large MARS Solid Support Ships would be acquired for the Royal Fleet Auxiliary, to replace the single-hulled RFA Fort Victoria, which entered service in 1994, and RFA Fort Rosalie and RFA Fort Austin (both dating from the late 1970s).

No UK companies have expressed any interest so far.

GMB is a general trade union in the United Kingdom which has more than 631,000 members. GMB members work in nearly all industrial sectors including shipbuilding, in retail, security, schools, distribution and the utilities, social care, the NHS and ambulance service and local government.

Don’t build in Scotland until we know whether they are with the rest of the UK or against us.

It has just 6 ships left that can supply oil to warships at sea, 2 x modern ‘Wave’ class tankers, the multi-purpose RFA Fort Victoria, 2 small elderly ‘Rover’ class tankers and RFA Orangeleaf. Other than the 2 ‘Wave’ class tankers, the RFA fleet does not conform to modern double-hull safety standards and are in urgent need of replacement. Basically it is the right decision, given the lack of funds and the sorry state of UK shipbuilding. Highly efficient yards employing cheap labour in the Far East virtually ended UK commercial shipbuilding a long time ago. The slow death of… Read more »

Orangeleaf has gone to the breakers earlier this year.

We should build these in the UK only if it is value for money. The korean built tides are exceptional value and for me we should build these ships in Liverpool and order 8 over the next 25 years, alongside another 4 tides. This will give us the required drumbeat of 1 every 2 years and added to the other work we should be able to get these in at a more competitive price The eight ships need to be multi purpose nd not just SSS and I really like the capability of the Karel Doorman class. Post Brexit we… Read more »

multi-purpose SSS would be very valuable & Karel Doorman class or similar good. The planned 3 is not enough though. A good design could also solve issue of Argus replacement and potentially replace Bays as well at end of life. Being not built to full military standard should make them more affordable than frigates. Also, with good aviation and hospital facilities they would make great humanitarian relief vessels which is a huge role in peace time. Given that, and current acceptance that a fair amount of foreign aid budget is badly spent at the moment, it would be good and… Read more »

I believe the Norwegians have bought an Aegir based SSS with a 50 bed hospital.

Couldn’t agree more – if we are making compromises then an Aegir based version of the Karel Doorman (helicopter facilities for 6 Merlins or 2 chinooks) would seem a logical long term proposal.

I also agree that the Foreign Aid Budget should pay for these, wouldn’t even make a massive dent – 1 ever other year costs about 200m p.a. to fund and they will release frigates to do defensive work.

We seem to forget that UK shipyards (both unions and management) have been their own worst enemy. Value for money has to be a major factor when spending tax payers money together with quality of workmanship and delivery on schedule.

Darren Riche-Webber
Reply to  T A A

taxpayer money abroad is dead money, it’s gone, it is no value.

Did not finish. It is only value if say one UK builder can build far cheaper than another UK builder to quality and time.

That’ll be 5 oilers left Colin. The Orangeleaf went to a Turkish Graveyard at the end of 2015!

Will Rosyth actually bid for the vessels?

No British yard bid for the Tides…

AlS
Reply to  The Other Chris

That’s not the point though, the point is that they MUST be given to a UK shipyard made with UK steel regardless of the cost!

One minute people are crying about the cost of ships and value for money so the MoD do the obvious thing and have them made somewhere cheap and then people whine about them not being made in the UK where the cost would be double.

Tell me about the cost doubling if UK built. Where did you get that from. Please tell.

Darren Riche-Webber
Reply to  The Other Chris

They did not because they knew the cards were stacked against them. The decision was already made with BAE and BMT to build these ships abroad.

Ha my replies are now being deleted automatically. Wow, you guys really embody the spirit of open debate.

With the RN so over-stretched in the last decade, RFAs have increasingly been doing work that would once have been done by frigates or destroyers. patrolling against drug traffickers. The large flight deck and hangars provide an excellent base for 1 or more RN helicopters and a Royal Marine detachment. RFA Fort Victoria recently completed a very successful spell on anti-piracy patrol in the Indian Ocean. Although slow and rather unwieldy, the RFAs have been able to adapt to these ‘policing’ roles. They are gradually being fitted with more light armament and their crews are adapting from their merchant navy… Read more »

Up arming the support ships, requires additional hardware to utilise them, which all costs money and requires experienced operators. Phalanx on the other hand is a fully automated system. Based on real case scenarios, arming RFA vessels with missiles etc is a waste of money. In the event of a real conflict, they would be escorted by a frigate or destroyer and in policing style roles they are up against people with light weapons and so even basic firepower can easily defend the vessels. Better to focus the limited budget we have on what is absolutely required rather than adding… Read more »

No British warship or RFA vessels needs to be built overseas, we have the shipyards and also these vessels will be an investment for our future as we can return to a time when British shipyards, were among some of the words best and are tradespersons also some of the best cause they learnt on the job because the companies had apprenticeships that they offered the young people – so bring back the Apprentices, and also use more British made products from British companies

“With regards to the no british warship or RFA needs to be built overseas” BAE recently completed 3 very similar vessels (Amazonas Class), eventually sold to Brazil for around £44M each, while the RN is paying £116M each for their vessels. The First Sea Lord recently gave an interview suggesting the RN would consider building frigates abroad. We need ships that can fight not look pretty we need to stop BAE from building any more ships for the RN they are under armed and dont work Type 45 under armed SACHSEN CLASS [GERMANY] AQUITAINE CLASS [FRANCE] CARLO BERGAMINI CLASS [ITALY]… Read more »

BAE need to let go of the yards. They are no shipbuilder, but put up with it, to get the expensive bits. Babcock built warships for the Irish navy in the 10s of millions. Not so capable, but not 15+ times less capable. BAE and MOD stupidity is a problem, unless they are all on a huge bung, then they are doing brilliantly.

I should of said that type 45 should and can take far more. A ship with so much potential let down by not thinking about being quiet and only having full capacity of missles in the future which could be over 100.

Why a separate UK customisation and trials work (how much BAE content)? Why not designed by foreign rivals too, why not manned by South Koreans?

This approach is a lie!

It has been said that the tax claw back from contracts like these is around 40%. There is no benefit from building abroad.

This is real and not made up. http://www.ukcolumn.org/article/international-public-procurement-rules-lay-bare-lies-brexit

These, and all Royal Navy ships, have to be built in British shipyards. It is a humiliation for a great country like Britain to get a foreign country to build our ships. Building them in Britain also gives our people well paid, highly skilled jobs and keeps our engineers in work. It is not a British governments job to keep foreign countries engineers in work. That humiliation must never happen again.