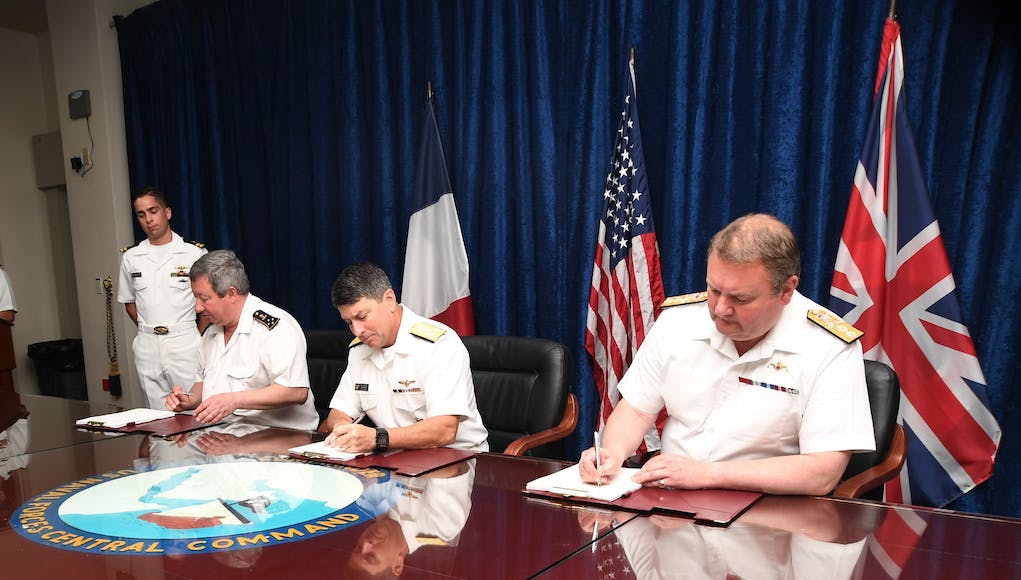 The United Kingdom, France and the United States have signed an agreement designed to increase coordination for anti-submarine warfare activities.

The agreement is designed for the three countries as they operate in the 5th Fleet area of operations.

The US Navy 5th Fleet’s area of operations encompasses about 2.5 million square miles of water area and includes the Arabian Gulf, Gulf of Oman, Red Sea and parts of the Indian Ocean. The expanse is comprised of 20 countries and includes three critical choke points at the Strait of Hormuz, the Suez Canal and the Strait of Bab al Mandeb at the southern tip of Yemen.

This agreement follows the signing of a document by Chief of Naval Operations Adm. John Richardson, First Sea Lord of the United Kingdom Adm. Sir Philip Jones and French Chief of Naval Staff Adm. Christophe Prazuck, in London in March.

In that document, the three chiefs of their respective navies affirmed their commitment to ‘enhanced interoperability’.

“We believe this increased trilateral cooperation will help secure a future that is not only in the interests of our three nations, but in the common interests of our allies, partners, and all like-minded nations who are committed to peace, prosperity, and maritime security.”

“This agreement expands upon the 2017 trilateral maritime talks between the leaders of our respective navies and codifies a practical framework on how we will operate in the 5th Fleet area of operations when it comes to coordinating anti-submarine warfare operations.

This agreement lays the groundwork for executing more operations together and enhancing cooperation in the undersea domain. The end result is safer, more effective operations that work in the best interest of all three countries.”

“Our nations have operated regularly in close cooperation for many years, but the agreement signed today, which followed the trilateral meeting of our respective Chiefs of Navy in March, allows our navies to reach a standardised level in anti-submarine warfare coordination across the region.

We thus will have right away in the 5th Fleet area of operations a high-level basis of cooperation to improve our operational results in undersea warfare.”

The US, Royal and French navies regularly operate together in connection with the 5th Fleet. France has deployed its nuclear aircraft carrier FS Charles de Gaulle twice to the Arabian Gulf in support of Operation Inherent Resolve.

In 2015, a French admiral, embarked on Charles de Gaulle, commanded Task Force 50, a US task force.

A Royal Navy admiral also assumed command of Task Force 50 last November while embarked aboard the amphibious helicopter carrier HMS Ocean. Additionally, both navies have had ships serving with the Combined Maritime Forces in the region.

The admiral in charge of TF50 was embarked on HMS Ocean. Just about to be sold off to Brazilians after a £65 million refit supposed to keep her in RN service until 2023. The French admirla in charge of TF50 onboard Charles de Gaulle is now unlikely to embark on the carrier again until mid to late 2018 as CDG is in refit. My point is apart from US Navy the British and French have a distinct lack of critical mass, hull numbers and capabilities. Both RN and French Navy need to up their game, get more warships and subs… Read more »

Totally right Mr. Bell. Let’s face it, Uncle Sam knows we bring very little to the table these days (and it really pains me to say that as it was OUR senseless decision to shed hull numbers and capabilities – and we are STILL doing it – ref Ocean as you point out). The Americans are not stupid – this is merely symbolic and a political jesture. Militarily, our servicemen are the best trained anywhere and we should be immensely proud of them as a nation. However, with just seven attack boats there is nothing here in this instance that… Read more »

Any tie up of multi national military resources, is a good way of fighting potential mutual enemies. What it should not mean, is the continuum of reduced individual national military budgets, thus covering shortfall by combining limited assets.

“What it should not mean, is the continuum of reduced individual national military budgets, thus covering shortfall by combining limited assets.”

We all know that is exactly what it means Maurice!

So, do the French now want a slice of the interaction our Armed Forces have been getting with the Americans for the last 70 years? It seems to me they want to have a ‘special relationship’ too, or at least muscle their way into our own one with the US. Is it that they see themselves as the military strong-arm in Europe (if Germanybis the political one)? Could someone explain Frances posturing lately?

due to various political defence cuts by the short sighted views of our.politicians,it’s a good we have America as our allies!(largest navy in the world).During Victorian times we over 1000 ships,how times have changied !!

Re submarines. The solution is simple order an 8th+9th Astute class. Accelerate the astute build rate from the current lethargic one sub every 2 years to yearly and shoehorn the 8th+9th boats into the yard before dreadnought class construction.

I agree that we need more hulls in the water but the issue for the foreseeable future is manpower. Ocean has got to go as we need the crew for the carriers. The best bet for getting round this as far as I can see is getting types 26 & 31 built quickly to replace the type 23s freeing up some personnel. Add the extra 400 sailors on that the SDSR promised we might just be able to crew the 2nd LPD and an 8th Astute (if we can afford it). The 13 type 23s have a crew requiment of… Read more »