The package is worth an estimated cost of $23.11 billion and includes 110 F135 engines along with aircraft ferry and tanker support.

It was reported back in December 2018 that Japan’s newly revised National Defense Program Guidelines and new Mid-Term Defense Program had mentioned the purchase of these fighters to add to the existing order of 42 F-35As.

In 2018, Japan also announced that it was intending on converting one of its helicopter carriers to carry F-35B jets.

The purchase authorisation is displayed below.

“The State Department has made a determination approving a possible Foreign Military Sale to the Government of Japan of one hundred five (105) F-35 Joint Strike Fighter aircraft and related equipment for an estimated cost of $23.11 billion.  The Defense Security Cooperation Agency delivered the required certification notifying Congress of this possible sale today.

This proposed sale will support the foreign policy goals and national security objectives of the United States by improving the security of a major ally that is a force for political stability and economic progress in the Asia-Pacific region.  It is vital to U.S. national interest to assist Japan in developing and maintaining a strong and effective self-defense capability. The proposed sale of aircraft and support will augment Japan’s operational aircraft inventory and enhance its air-to-air and air-to-ground self-defense capability.  The Japan Air Self-Defense Force’s F-4 aircraft are being decommissioned as F-35s are added to the inventory.  Japan will have no difficulty absorbing these aircraft into its armed forces.

The proposed sale of this equipment and support will not alter the basic military balance in the region. The prime contractors will be Lockheed Martin Aeronautics Company, Fort Worth, Texas; and Pratt and Whitney Military Engines, East Hartford, Connecticut.  There are no known offset agreements proposed in connection with this potential sale. Implementation of this proposed sale will require multiple trips to Japan involving U.S. Government and contractor representatives for technical reviews/support, programs management, and training over a period of 25 years.  U.S. contractor representatives will be required in Japan to conduct Contractor Engineering Technical Services (CETS) and Autonomic Logistics and Global Support (ALGS) for after-aircraft delivery.”

This notice of a potential sale is required by law and does not mean the sale has been concluded, say the U.S. State Department.

Relevant for Tempest fantasies too.

Glass Half Full
Reply to  Andy

Perhaps so but I’m not sure in the way you meant? The RAF will probably need to decide if its wants F35A for the long haul, or whatever results from Tempest, which is likely to be a superset of F35A capabilities. Having both isn’t likely to be a good option because it would almost certainly cut the number of Tempest aircraft and undermine the program, driving up costs when there is a major focus in the program to reduce them, in order to enable greater RAF aircraft numbers. If the RAF sticks with F35B in the interim and then migrates… Read more »

Glass Half Full
Reply to  JohnHartley

Its actually a mix of F35A and F35B, but your point still stands that aircraft cost is much more than the headline number. The V-22 price point was particularly interesting in the context of frequent cries to just buy V-22 for CSG AEW and COD. We’d probably need at least eight to support those two roles, so a cool $2B before we even factor in the cost of developing an AEW solution for the V-22.

Yes – quite right – lests not buy anything, that WILL save money… The fact is that there has always been a big cost difference between the basics and an operational platform. This is nothing new. Every time we buy a new platform you have to spend money…. this is the case with our F-35 buy. The point is sometimes you have to spend to obtain a credible capability. We currently have no credible capability for our carriers no COG and Crowsnest is a joke. It is interesting to not that US V-22 are set to support QE on her… Read more »

Why is Crowsnest a joke? And how does V-22 save money, presuming you were referring to that? I wasn’t questioning our F-35B buy.

Do you have a link confirming V-22 QEC deployment? And on COD, why is V-22 a much needed capability for the UK to organically support vs making do with Merlin, port stops, or requesting support from the US in extremis? French took advantage of US COD capability during Libya.

OK Crowsnest is a joke because its radar the Searchwater dates back to Nimrod MK2 in the 70’s. The AEW one dates back to 1982. The one Crowsnest is getting is not much more advanced then the 1980’s one in terms of radar technology. It is not a modern ESA radar and is based on old technology. The carrier life span is 50 years thats how long the AEW solution has to last. You are asking a 197o’s radar to detect hypersonic Manouvering stealth targets into the 2070’s – not a chance. Then there is the platform. The Merlin is… Read more »

It is from Save the RN. It says that V-22 is likely to work with QE on her deployment to support the embarked USMC. In effect a COG role.

Well what it actually says is “USMC V-22 Ospreys will not be permanently embarked on the carrier but, together with CH-53E Stallions, may be used to provide Maritime Intra-Theatre Lift to the carrier group as it moves around the world, supported by the global US military logistic support footprint.” And indeed those assets MAY be used (STRN speculation), but not as organic platforms.

Yes I agree and that’s what I said.

I never said they WOULD be based on QE only that it is likely they would support her.

Sure Crowsnest is using an older radar technology. It doesn’t mean, along with the Cerberus mission system, it is incapable of doing a good job. It’s been continuously upgraded since the 1980’s, so characterizing it as 1980’s technology is a bit disingenuous. It will also be operated alongside F35B while flying CAP using their radar and thermal sensors. Hypersonics will have a pretty large thermal signature. As a practical matter of assessing acceptable risk in the current political climate, since context is all important, consider that USN LHA assault ships such as USS America have no AEW whatsoever today, unless… Read more »

I am glad you agree that Crowsnest can only ever be an interim solution – the quicker we are done with it the better. On the constantly upgraded bit, it has got a new front end but the basic radar IS 1980ls technology. You spend some time telling me ii can get the job done and then say the F-35’s will help it out – they will need too! I think the fact that the fighters crowsnest it supposed to control are more capable at AEW then the AEW solution – says it all. I rest my case. On radar… Read more »

Hmmm, you seemed to be assuming Crowsnest was going to serve into the 2070’s so I don’t think I was agreeing with your perspective when I suggested it was an interim solution. I included F35 because AEW isn’t just about Crowsnest or E-2D alone. F35 will augment E-2D too, its one of the strengths of the F35 platform and 5th gen warfighting. One area where I think the RN’s budget will be better spent is in implementing CEC, as the US have done and the French are doing, to more efficiently network all sensor platforms. Perhaps later in the 2020’s… Read more »

Agreed that in practice all sensors will be used to protect the fleet. That goes without saying. Yes the first line of defence for any carrier group is the ability to hide from its potential attackers. However I am still not convinced that Searchwater is the right choice for the RN. We could have done so much better. The proposed modified F-35 radar in a pod for Crowsnest would have been a better choice. It is a modern AESA radar with great detection capabilities. Its only major drawback is its limited feildo of regard. However if you were to spin… Read more »

Soon there will be 500 F-35s containing China within the island chains.

This is good news. A strong navy for japan will be an added counter to China’s expansionism. I would like to see Japan and Australia get bigger carriers, not just converted helicopter carriers.

I wonder what Japan will do for carrier AEW? With any luck they will go for a radar project involving V-22 we can join in with.

Initially the JMSDF will probably operate under the umbrella of their existing E3C/D fleet which can pretty much cover Japanese islands home waters and EEZ. If they choose to deploy their jump carrier when completed and equipped with F35s and CV22s I would not be surprised if they don’t stick an AEW package on the V22. They certainly have the ability to do so. As for a full sized carrier, it’s coming. I expect an announcement of such before the end of the decade. Probably look something like this: &f=1&nofb=1 Yes, it’s a model illustration but interestingly, large Japanese warship… Read more »

A CV22 AEW would be good – if they have the funds to do the development we could buy into there production run. Everyone wuns.

Not sure on any specifics but it would probably be in the RN’s QE class in size but with CATOBAR installed if that gives you any clue. Think USS Midway in size and capability. Here’s another illustration with a comparison between a future carrier and the Hyuga class helicopter carriers: 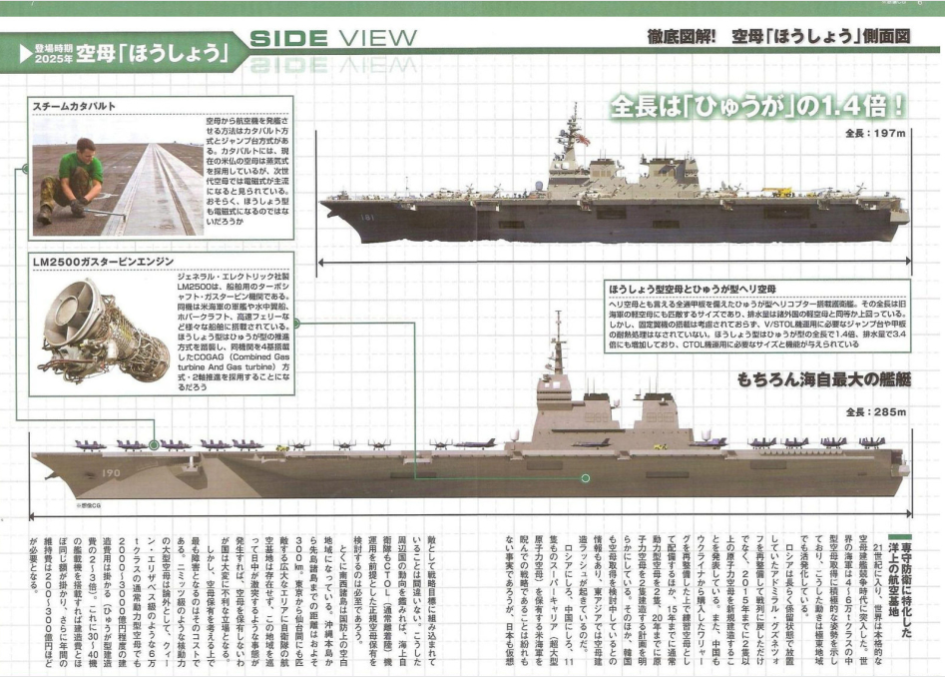 The Izumo is almost finished fitting out for F35B operations and the Chinese are not happy.

What the Izumo and Kaga may look like after conversion

I wonder why they’ve put the ramp so far back?

Japan understands, and is on the front line of Chinese aggression and expansion. Japan has a decent sized navy, being an Island……er we could learn from them in that respect.