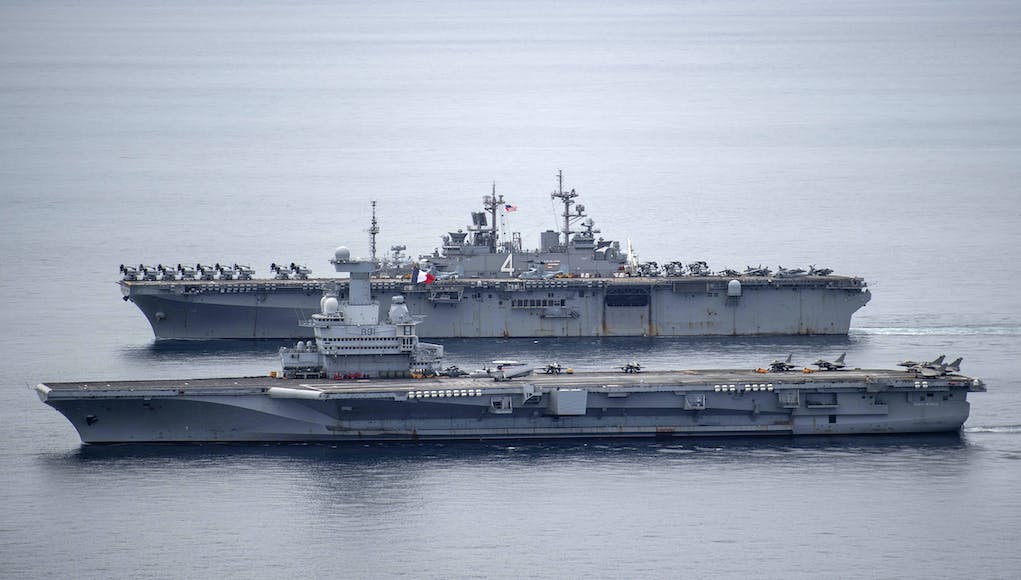 “The opportunity to train with the French navy demonstrates the ARG’s capability to operate with our allies and partners in the Indo-Pacific,” said Capt. Brad Arthur, commodore of the USS Boxer Amphibious Ready Group (ARG) in a release.

“Our Sailors and Marines benefited greatly from working with our French counterparts.”

“That is why we seize each opportunity to plan exercises at sea with our allies and partners to increase our mutual knowledge and ability to work together.”

The French Navy carrier strike group deployment is the first in the Indo-Pacific region since 2002.

Remember, Boxer is an amphibious assault ship which means it has a well deck. In order to have room for that, it is going to have a taller, more stout hull.

Indeed, it should be noted that the CdG and a USN Wasp class LHD have almost exactly the same full load tonnage.

I was a bit confused by this. Are there no US escorts in attendance as well? I did some Googling and found, judging by the date of the release (1st May 2019), what is presumably the announcement of this USS Boxer Amphibious Ready Group departing the USA (https://news.usni.org/2019/05/01/boxer-amphibious-ready-group-11th-meu-leave-on-scheduled-pacific-middle-east-deployment) and that doesn’t mention any escorts either. Is this normal practice for an ARG?

I’d be very surprised to see USS Boxer operating alone without a least one Arliegh Burke in presence. What is surprising is the description of the French carrier battle group in only one destroyer and one frigate.
I hope when we do the same types of exercise with either Lizzie or PoW, they are better protected.

If only we had the right steel!!!

So will they get to a point and say we’ve got enough that the US Navy can no longer interfere in our ambitions i.e. reclaim Taiwan?

A very good point Davy B,

Their military capability is expanding at an alarming rate, while we continue our slow build approach.

@Nigel Collins – How can you compare the rates of build of China against the UK? China is a totalitarian communist state with intentions of using military might to achieve its empirical ambitions. It also has an endless supply of cheap labour, only has a passing acquaintance with Health & Safety and cares not one jot about its environment. It is also extremely protectionist of its own industries while being happy to subsidise its exports to generate foreign currency.

I prefer the UK and its slower build but with everything else that goes with living in this country thanks.

Chis, it’s more than that, it’s subsiding of industry goes beyond a need to generate currency, it’s mainly about using trade as a way to dominate other states. It’s classic mercantilism and the neo liberal ideas of west have had little answer to this as a play.

“China is a totalitarian communist state with intentions of using military might to achieve its empirical ambitions.”

My point is, What will we have to stop it?

“Why will the Royal Navy not have its first Type 26 frigate operational until 2027?”

@Nigel Collins – from a purely UK geographical point of view I don’t think China represents a real and present danger to these islands given they are half a world away. However they are a potential threat to our Canadian, Australian, NZ and US friends in the Pacific Rim. So I see our response to possible Chinese military threats in that context and by definition we would not be playing any leading role but a fully supportive role. That understanding makes our need for a large fleet to counteract any Chinese growth in its Naval fleet less pressing.However I agree… Read more »

I hope your assessment is correct Chris H

@John Collins – And if there was any threat of action from Russia (with or without Chinese assistance) would bring the full force of NATO into play and again we would be playing a substantive but supporting role. I totally agree we must build up our defence forces as much as we can afford but we cannot delude ourselves we are (or ever were) the world’s policeman. The USA took over that role (not that we asked them) and have funded their military accordingly along with the protection for US Incorporated. Some cynics might say that China is only doing… Read more »

Can all NATO members be relied upon in a crisis? or find a suitable excuse not to intervene?

@Nigel Collins – Well that is a whole new discussion mate and I would make Germany the lead example of failure to support NATO adequately. Frankly every EU country (bar the ex Warsaw Pact countries!) have freeloaded off us and the Yanks since WWII for their mutual defence against the Soviet Union and later Russia. But we as the UK cannot and must not overload our economy with disproportionate defence costs (and by this I mean like the 3.6% the USA spends) simply because others are not pulling their weight. I know this will annoy some but I think after… Read more »

I apologise for my earlier fantasy fleeter language earlier.

This is the future of the QE class, a massively over packed US Assault ship, next to a larger but almost empty French carrier. Purely from an optics perspective, the US ship looks like it is a significantly bigger threat.

The relative crowding on the decks struck me quite forcibly too. An impressive display of force from the USA as usual.

Its kinda hard to see based on the picture but it seems the US ship has 4 jets aboard whilst the french carrier has 7. Although clearly the US ship has way more helicopters onboard.

@Steve – I wouldn’t attach too much significance to what is on deck. The US Navy always fills decks with aircraft be they carrier or amphibious ships. Especially in a Photex. The RN historically didn’t do this because of the more austere seas it typically operated in with its carriers and hence the lower numbers quoted. A US Navy carrier in the Pacific can park far more aircraft on its deck than can a RN carrier in the North Atlantic. And lets not forget the CdG is on a flag waving trip and so has a minimal number of Rafale… Read more »

I wouldn’t be surprised if the US rolls them out on deck for photo ops and when close to land to give a better impression of power.

However, it really comes down to availability of air frames. France (and the UK) just don’t have enough jets to fill out their carriers for anything other than a major conflict.

What is interesting is to view these ships from above, where you soon realise how much real estate i.e. deck area the QE class has compared to the Charles de Gaulle and the Kuznetzov type carriers. Puts into perspective how dinky the Invincible class were, yet how we managed to use them for more than their original design purpose.

Interesting back story to these two ships is the link between them. A QinetiQ owned T Harrier was converted to test new automated avionics (termed ‘Active Control Technology’) and especially in regard to landing STOVL aircraft. It was called the VAAC Harrier and was recently shown at the RAF Cosford open day. Anyway long story short: In 2007 and 2008 the Harrier flew off the CdG’s decks (as it also did off HMS Illustrious’ decks) testing automated vertical landings, SRVL landings and other in-flight automated control. Boxer will fly F-35Bs using the British developed SRVL and indeed the whole VAAC… Read more »

Thanks for that Chris

Yes I remember the VAAC Harrier.