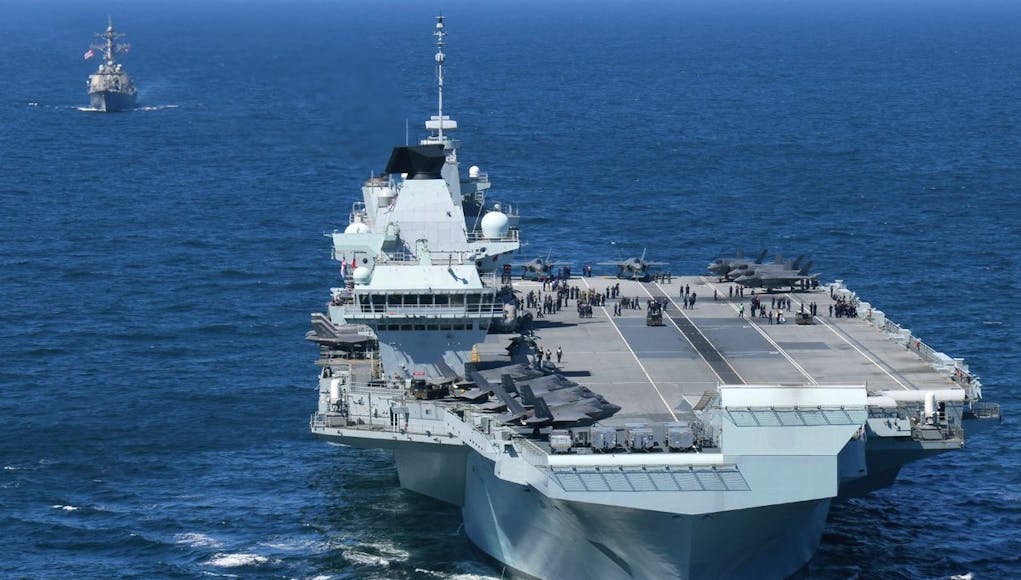 USS The Sullivans assumed air defence command duties for HMS Queen Elizabeth and the rest of the Carrier Strike Group to “demonstrate interoperability”.

It is important to note that according to the U.S. Navy, USS The Sullivans is operating under tactical control of UKCSG “providing multi-warfare defence to the Royal Navy aircraft carrier HMS Queen Elizabeth”.

According to the U.S. Navy here:

“The UKCSG’s transit of the Mediterranean Sea provided an opportunity to train and exercise with our NATO Allies and regional partners to include operations with Italian and French Navies and Air Forces.

The first deployment of the UK Carrier Strike Group – CSG21 – is a historic achievement and the culmination of a decade-long bilateral carrier cooperation effort to deepen U.S. – UK interoperability in an unprecedented way.

Cmdr. David Burkett, commanding officer of The Sullivans, was quoted as saying:

“Taking air defense commander duties was the culmination of our pre-deployment training with the Carrier Strike Group during Exercises Joint Warrior and Strike Warrior.”

Having sailed from Portsmouth, I wanted to highlight the legacy behind the @USNavy USS The Sullivans. Alongside VMFA-211, they form the backbone of the #BlueGreenTeam's contribution to #CSG21. pic.twitter.com/3FewVKOr4w

That’s what it’s all about…..all working together seamlessly….hopefully won’t be long before some other friendly ships tag along for a while….

And there was me being all cynical about a broken T45 too….

If you’d been following, there already have been…

Don’t forget there is a Dutch frigate in the CSG!

Fire up the SPY-1D radar.

No indication of that happening. This is normal operating procedure when a foreign ship that is capable of handling air defense duties is part of task force. Everyone gets a chance to be the quarterback. lol

For a very brief moment there – I thought that the other Type 45 might have broken down and now the American’s were the only ones in the group with functional Air defence destroyers.
Glad I’m wrong.

The QE is a magnificent ship with a formidable presence! Thanks Gordon Brown!! Btw, count the number of F 35’s on the deck in 20 seconds. Chances are you will miss one!﻿ 😀 ﻿

Gordon Brown? I thougt Tony Blair was PM when the carrier project was green-lit (1997).

11 there’s 2 tucked between her towers

Normally the USN Ticos do this job in the USN CBGs. AB flight 3 will be taking it over eventually in the years to come with their new AESA SPY radars.
Until then the USN is struggling on with Ticos that are suffering massively with maintenance and structural reliability issues.
T45 in previous years have done the Air Defence CoOrd job when attached to USN CBG in the Gulf region.
The Link manager will be working hard!

The AB Flight III will share their radar with US Navy’s FREMM derived frigates. Would that mean they would be able to take over AD Command. They may be a tad small though.

The new Constellation frigates are supposed to be getting a smaller version of the new SPY6 radar. The array’s cross sectional area will be around the same size as what the Flight 1 Arleigh Burkes should be getting. Only the Flight 3s will be getting the full size SPY6, as they can compensate for the additional top weight. By having a smaller array size, the radar’s detection range is much reduced. I would still expect a detection range similar to the SPY1 as fitted to the Flight 1s. So in theory the frigates will have a comparable performance, but with… Read more »

SPY6 radar has significantly more sensitivity, so all other things equal, those in Constellation FREMM should have more range than Flight 1

I sort of agree. I know the peak power output of the SPY-1 radar, but not the SPY-6. The SPY-6 has been in development for the last 10 years. The assumption is that the longer wave S band has at least the same power output as the SPY-1, the X band would be less so. They do claim it will be more sensitive, perhaps up to 30 times, but they don’t say if that is for the full size or the smaller version, though i suspect it is the full fat version. However, I do wholeheartedly agree that it will… Read more »

What will be the comments when the Dutch ship takes over that role? The whole purpose of rotating the roles is so that there is one not just ship worked up and ready to go but a range of them so that is anything does fail for real you just chop to #2 -> #3 and as there is #2 and #3 present that wouldn’t be a problem then. There is also an issue of resting crews on long deployments and not knackering or giving away too much about certain kit. So you might say want to switch off Sampson… Read more »

You leave kit running on known frequencies that you are not worried about. In full on war time the restrictions come off and you go full spectrum on transmissions. As a note that doesn’t happen unless its a full on conflict. Even in GW 1 & 2 the RN did not go full spectrum and frequency hopping.
As Sampson has LPI (Low probability of Intercept) property’s its not a huge issue.

We have terminology awash these days – Carrier Strike Group, Carrier Task Group and now I have heard Carrier Battle Group. Can anyone enlighten as to the difference between these terms?

When is the other T45 coming back? Nice having the yanks tag along but rather rely on our own capabilities.

Just to be clear, it’s not an action born of necessity- it really is to train and test interoperability.
RN T45s have previously done the same for USN carrier groups that they’ve been attached to at times.

That’s a strange-looking destroyer (see main pic)! I know the US makes ’em big but…

Don’t see many guns or silos on it either…

Japanese do destroyers in a similar configuration!!!

Thanks Pete – I stand corrected and educated! I hadn’t know about these Japanese helicopter ‘destroyers’. Certainly, with a 16-cell VLS, Phlanx and torpedo tubes, it’s a formidable beast. One could ask why the Lizzie isn’t fitted out for this offensive/defensive role. I guess the answer is that she will always be escorted by DDs and DDGs for defence. But I don’t know what escorts a Japanese carrier may or may not have, to support and protect them. Any idea?
Cheers

Ample! Think they have a surface fleet of 40+ dd/ff….generally all very well armed . On the flat tops it’s no different really to the 3 x Invincible class with Sea Dart . They were classed as anti sub ‘cruisers’ to avoid the political fall out of having aircraft carriers ! Similar story in Japan. Destroyers perceived as more defensive rather than the offensive capability associated with aircraft carriers. Result …more acceptable politically under the post WWII constitution. On torpedoes…often wondered why likes of T26 etc dont have tube launched heavyweight high speed long distance torpedoes to augment single point… Read more »

Mate. That Destroyer has a 90 MK41 VLS, a 5″ inch Mod 4 naval gun, 30mm cannons, machine guns and shipboard torpedoes. Harpoons, double CIWS. As it is Flight I Arleigh Burke, it has no hangar but Flight IIA + Flight III all have hangars. An older one, (DDG-68), failed target of a bombing, but then USS Cole was instead chosen. So that ship is more heavily armed than most of our ships. Not that our ships aren’t more advanced for that matter 🙂

I’m hoping the RAN Hobart class may be available in this role at some stage. Their navy is very capable and will certainly add value to the deployment. It will also tick the Chinese off (again) – so all good.

Is HMS Diamond back from the unexpected maintenance that happened the week before last?

No she is off to Italy for further repairs.

Alot of people online (mainly Americans) go on about how the AB has a much greater range in the air defence role and missiles which can go much further than the T45’s, hence they claim its a much better ship at that role than the 45s. Surely this is only possible with AEW when they are part of a CSG? The radar on the AB and T45 would in theory only be able to see the same distance due to the curve in the earth? Take an AB out of a group with no AEW its missiles with extra range… Read more »

excellent info,, nice we are working together.. go Navies