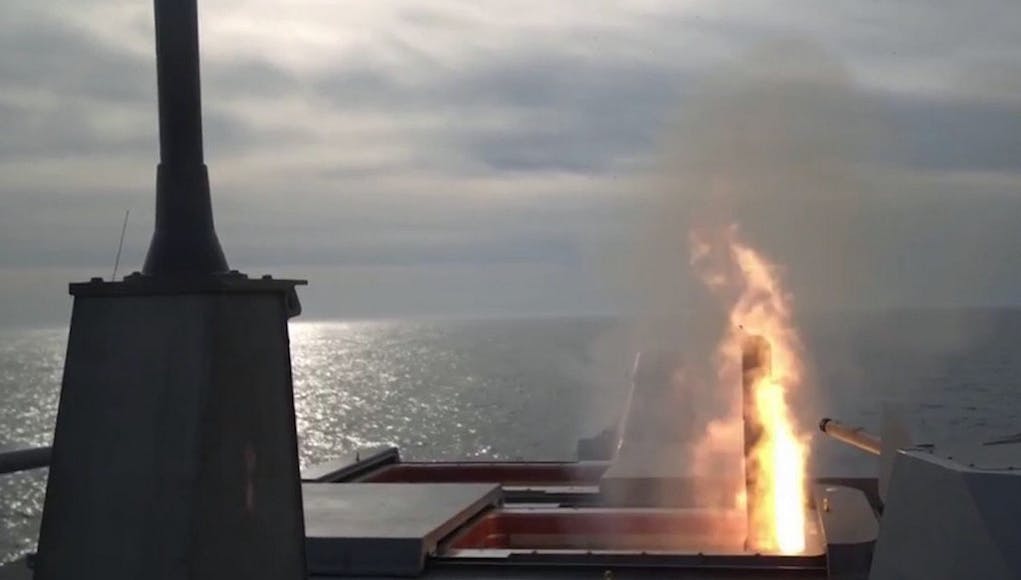 The US Navy has conducted a test firing of the Surface to Surface Missile Module from a Littoral Combat Ship.

According to reports, the test marked the first launch of a missile from the SSMM from an LCS as well as the first vertical missile launched from an LCS, as part of the developmental test program for the Surface Warfare Mission Package.

“The testing aboard USS Detroit was an important milestone in advancing LCS capability, not only for the LCS community but for the entire fleet. As small boat threats proliferate, the SSMM will give our ships added lethality.

SSMM utilizes the Hellfire Missile in a vertical launch capability to counter small boat threats. SSMM is the next delivery of capability for the LCS SUW MP, which achieved initial operational capability (IOC) in November 2014 with delivery of the Gun Mission Module (two 30mm guns) and the Maritime Security Module (11m Rigid Hull Inflatable Boat for Visit Boarding Search and Seizure).

This was another positive step forward in fielding of the next increment for the SUW MP. The SSMM is a critical piece of the SUW MP and this event will allow us to move safely into developmental testing and soon to fielding this capability aboard LCS.”

The Surface Warfare Mission Package will begin developmental testing aboard USS Milwaukee later this year and will culminate in operational testing and IOC in 2018.

I don’t see why not Ron 5, the Detroit would sit at around the size and perhaps capabiliy of the T31, so that’s of interest speculating about its future design – specially if the T31 is for use around the Horn or east of Eden. Hellfire could well be useful.

We have some other interesting options, not all in exactly the same 9kg warhead space as Hellfire but all small or small-ish missiles. Possible surface mode already talked about for Sea Ceptor and similar talk, although further away, of a vertical launch Spear 3 (which would be really useful). Also here now is the Sigma mount for 30mm to add LMM to it (OK, much smaller warhead but would still give a skiff or RIB a very bad day). LMM potentially also carryable on a ship-deplorable UAV such as the Schiebel S-100.

We should be installing Brimstone Sea Spear on our River Class OPVs, Type 31 frigates, unmanned vessels and all of our Amphibious Assault ships.

I don’t see the point of putting a very short range surface to surface missile on a ship; a gun would seemingly be a better bet for an engagement at 5 miles (Hellfire range).