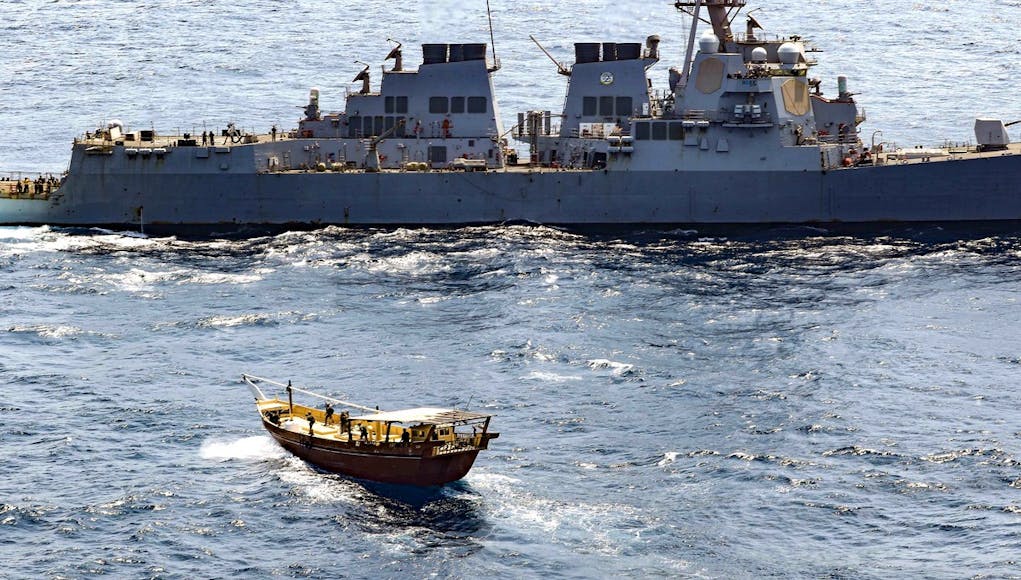 American destroyer USS Winston S. Churchill has seized illicit shipments of weapons and weapons components from two stateless dhows during a maritime security operation in international waters off the coast of Somalia, say the U.S Navy.

“The original source of the weapons has not yet been identified. Churchill located the dhows and provided more than 40 hours of over watch and security for the ship and its boarding teams throughout the two-day operation. The dhow crews were provided food and water before being released.”

“We are proud of the combined efforts of the AIT and Churchill crew members for executing dynamic and demanding boardings,” said Lt. Travis Dopp, Assistant AIT Leader aboard Churchill.

“We are proud to have a positive impact on the safety and security of coalition forces by interdicting shipments of lethal aid.”

The seizure of the illicit weapons by Churchill was conducted as part of the U.S. Navy’s regular maritime security operations in the region.

The U.S say these routine patrols are performed to ensure the free flow of commerce for legitimate traffic and to disrupt the transport of illicit cargo that often funds terrorism and unlawful activity.

I was for 3 years, before we paid it off, on HMS Marlborough who the crew swap was with. We had a USN navigator and the USN had a Brit.
Managed a run in Norfolk when Churchill was in… What a very socialy confusing weekend that was RN WOs and CPOs mess v USN Chiefs mess. I doubt the Churchill Command Master Cheifs swimming pool has ever recovered.
I think the swap still happens but I don’t know which RN ship has the USN officer.

“The original source of the weapons has not yet been identified.

A few years back I read that Iran was supplying Al Shabab with weapons via Eretria I wonder if this is still the case?

The dhows dont have that big a range and are limited on how far out to sea they go so it doesn’t take a lot of work to see where they came from.
Everyone knows where the arms are coming from…
We know.
They know we know.
So everyone keeps quiet and continues to play, as Kipling said, “The Great Game”

It was the same in Afghan, when “capturing” shipments coming over the border. Arms, ammunition and explosives caught in the south were straight out of Pakistan and still had their army registration numbers on them. There were even a lot with Chinese manufacturers details on them. Then in the West, the stuff was factory fresh from Iran. Remember witnessing an almighty flash when the Hilux refused to stop after warning shots from M134 minigun. Drove straight through the stream. We think it was hauling RPGs, it also took out and crippled the following Hilux, where the occupants tried to make… Read more »

An “advisor” I met here explained the situation in Bahrain a few years ago. The local security forces found a warehouse with new weapons and a ton and a half of PE in it along with guys with Iran stamps in their passports. . The weapons and PE Ihad made in Iran stickers on most of it.
When the Iran govt was questioned about it they said the labels where added to make them look bad!

As I said it’s all part of the great game.

And dont forget the Pakistani army both training and operating Talib mortars for them!

but this game is without rules.

i hope disposal over the side is carried out without delay