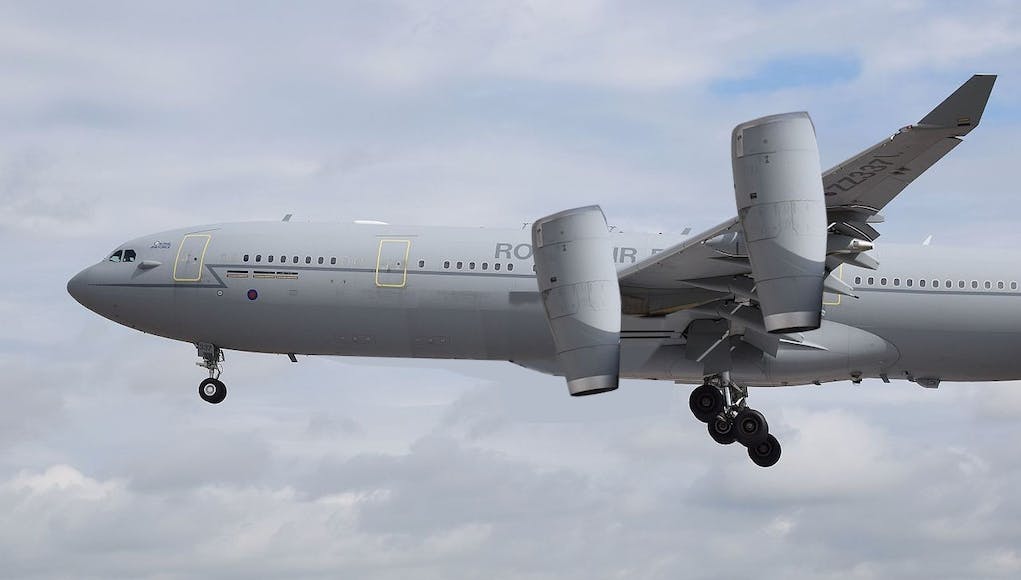 After successful trials, the entire Voyager fleet will be re-engined and adapted for carrier onboard delivery work.

Carrier onboard delivery (COD) is the use of aircraft to ferry personnel, mail, supplies, and high-priority cargo, such as replacement parts, from shore bases to an aircraft carrier at sea.

The new contract, worth £145Bn, will be put to tender today and will involve converting 14 airframes and adding Rolls-Royce T406 engines. The engines, dubbed April-J by the firm, are unique when it comes to this kind of aircraft. For take off and landing the engine nacelles are directed vertically (90° to fuselage), while for forward flight they are rotated parallel to fuselage.

14 Voyagers are in the UK’s fleet, nine are in the RAF’s ‘core’ capability and the other five are considered ‘surge’ aircraft and are often leased to airlines when not required.

It should be noted that one or two of the surge fleet remain in the Air Tanker livery and are ofte flown permanently on MoD transport duties to the Falkands, Canada and locations.

If you’ve read this far, congratulations. The purpose of this article, aside from our usual April Fools day joke, is to highlight that reading beyond the headline should be the ‘done thing’ for every article and not only those published today. The real message behind this article is, be careful when you read news online or offline as sometimes it’s entirely false.

Poor. Must do better! Not fooled!!!

I really enjoyed this one, instantly knew it was an April fools, but the whole notion of converting a voyager to vertical takeoff is so absurd it made me giggle.

It would run out fuel before it has the opportunity to refuel anything else!

Already on the drawing board in China!

April Fools aside. I think there is enough room for C130 to take off from a QE. It’s the ramp angle that the question.

First checked the photo.. It was obviously fake.
Then read the article… it was UNrealistic..
I did not believe at all..
but did not think about April fool..
Just trying to figure out why such weird news..
Thanks for the joke 🙂

I almost fell for that did god’s sake ???