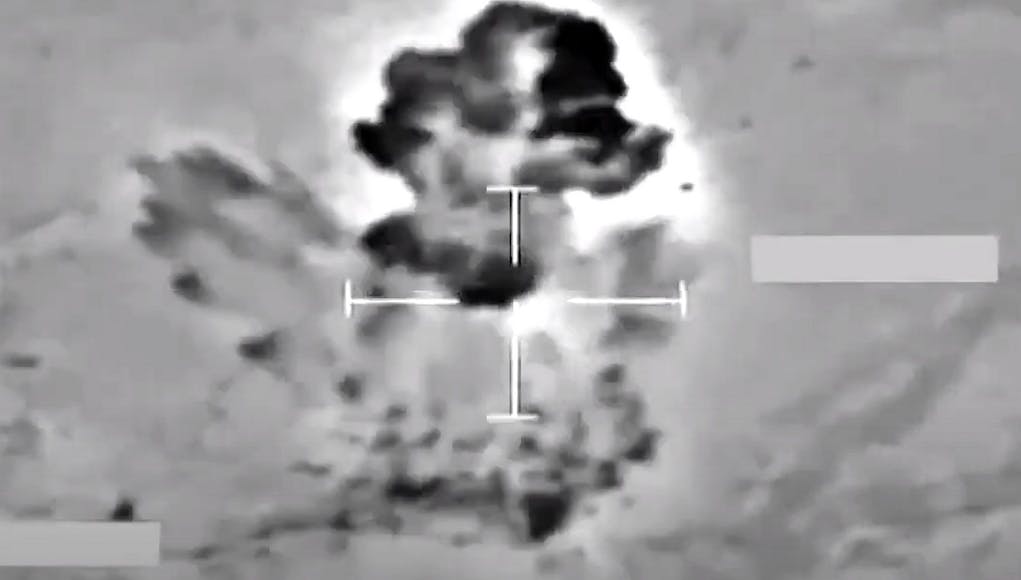 “Our aircraft conducted a careful check of the area around the caves, which were a mile and a half apart, for any signs of civilians who might be at risk, before conducting simultaneous attacks, using two Paveway IV guided bombs against each group. All four of the bombs struck their targets accurately and the strike was assessed to have been a success in eliminating the terrorist threat.”

“On Tuesday 6 October, a small group of Daesh extremists attacked Iraqi security forces in the desert of Anbar province, west of Baghdad. A coalition air strike provided immediate support to the Iraqi troops, and succeeded in destroying half the attacking Daesh group. An RAF Reaper was then tasked to deal with the remaining terrorists.

The crew of the Reaper successfully located them, and at an appropriate moment, with no sign of a strike posing any risks to friendly forces or any civilians, conducted a carefully planned attack with a GBU-12 guided bomb. The Iraqi forces subsequently reported that the threat had been eliminated.”

Crikey, I hope no one gets too upset on this site seeing all this sort of stuff…….. Cue the Usual Trolls !

Excellent, I do hope they were our UK exported terrorists, something both satisfying and very fitting about putting our own house in order in this rather forthright fashion….

Jihadi John style. Beheads people and got his comeuppance. That was a fantastic operation by UK and US forces and I recall JC was complaining he should have been arrested. In some situations that is not possible.

I guess here the more interesting part for me is who is on the ground spotting these places.

Exterminating cockroaches…..keep it up, well done.

Great to see. I think we’ll be hunting these for some time to come. Take a few of their mates down too hopefully

“Our aircraft conducted a careful check of the area around the caves, which were a mile and a half apart, for any signs of civilians who might be at risk“
Well I guess Daesh knows how to prevent future attacks.

That’s why we have Brimstone!