After confirming that the Type 26 Frigate would be built on the Clyde, Michael Fallon has indicated that the Type 31 Frigate will also be assembled there.

The Clyde is expected to work on 5 Offshore Patrol vessels, 8 Type 26 Frigates and “at least” 5 Type 31 Frigates, an increase over what was previously promised.

It’s speculated that the build plan for the Type 31 Frigate will follow a similar pattern to that of the Queen Elizabeth carriers and early Type 45 Destroyers in that blocks will be built in yards around the UK and assembled on the Clyde.

Modern shipbuilding makes considerable use of prefabricated sections. Entire multi-deck segments of the hull may be built elsewhere around the UK, transported to the building dock or slipway, then lifted into place. This is known as “block construction”.

Yards pre-install equipment, pipes, electrical cables and any other components within the blocks, to minimise the effort needed to assemble or install components deep within the hull once it is welded together.

“Nobody is shortchanging the Clyde. This is a huge moment for the Clyde; we’re confirming we’re going ahead with the steel cut next summer, earlier than expected. The first eight will be the Type 26 combat ships.

After that, we will be building a lighter frigate and we will end up with a fleet that is larger than the fleet at the moment.”

Responding to earlier speculation that the work could go elsewhere, Fallon dismissed this by saying:

“BAE will be in pole position [for that contract]. They’re the principal warship builder.”

This isn’t a surprise to anyone in industry, it’s a certainty that the vessel will be assembled on the Clyde.

The original planning assumption for the Royal Navy was for thirteen Type 26 Frigates (eight ASW and five GP), replacing the Type 23 frigate fleet like-for-like. However, it was later announced during the November 2015 Strategic Defence and Security Review by then Prime minister David Cameron that only the eight anti-submarine warfare Type 26 frigates would be ordered. 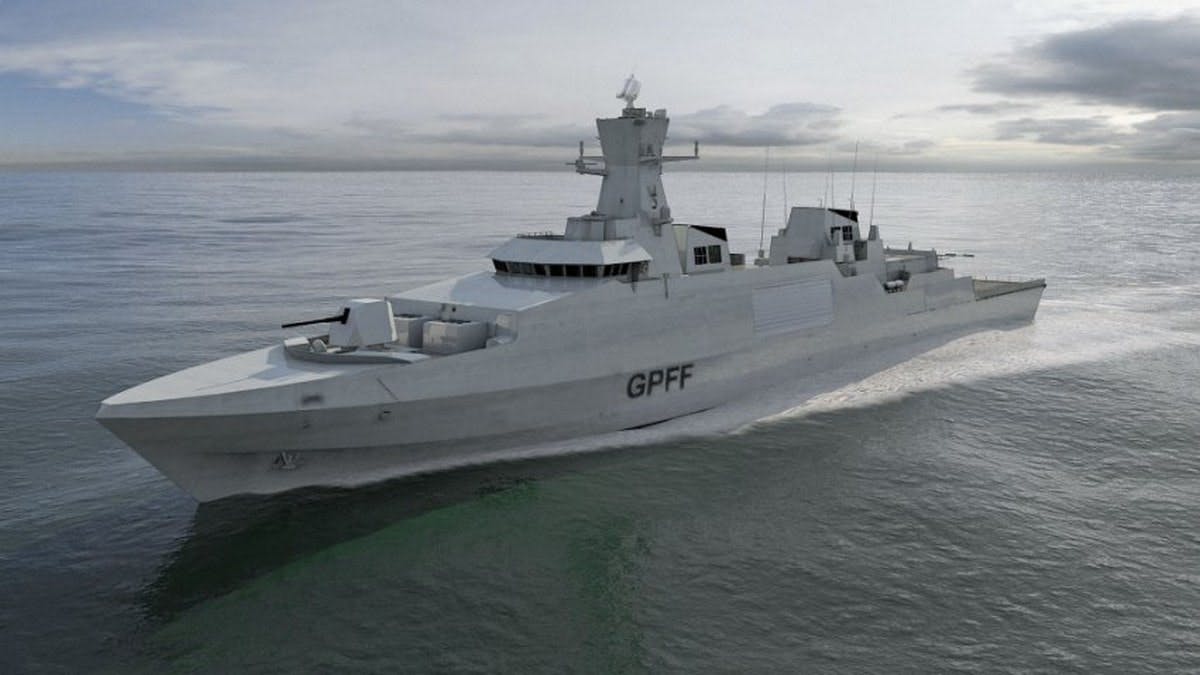 The Cutlass design, pictured above, is a significantly stretched and enhanced derivation of the Al Shamikh-class corvette design and sits at the high end of the cost/capability spectrum. In Omani service, the vessels this design is based on carry one 76mm Oto Melara cannon, two 30mm MSI DS30M 30mm cannons, eight MM-40 Block III Exocet SSMs and twelve MBDA VL Mica SAMs.

The Avenger design is a modified Amazonas-class/River-class Batch 2 offshore patrol vessel, similar to the currently in-build OPVs on the Clyde and has been offered to fit the low end of any potential cost and capability options.

Due to an expected lower cost, the government suggested it may allow an eventual increase in the total number of frigates in the Royal Navy. This general purpose frigate will be designated as the Type 31 frigate.

Prime Minister at the time the Type 31 Frigate was announced, David Cameron, told the House of Commons:

“There will be eight of the Type 26’s and at least another five of the new type of frigate, probably more, and they can be built in Scotland if the conditions are right.

The only way these ships wouldn’t be built in Scotland is if Scotland was independent and didn’t have the national resources of the Royal Navy.”

couldn’t agree more – both designs leave much to be desire, especially when the Germans and French are really upping their game.

Don’t mind who builds our ships as long as they are built in the UK and provide what the RN needs, rather than some poor mans fishery vessel.

Thing is, they’ve been given the contract to build them; that doesn’t mean it will be BAE’s design though?

Point of order. It’s the Khareef class corvette, not Al Shamikh, which is the name of the first vessel in the class. Much the same as the first of the River class is called the Tyne, not River.

Don’t mind where they are built as long as it is a UK yard and the RN gets a decent vessel, in greater numbers than now.

Steel cost is pretty cheap and so i assume the hull itself is not excessive, although the low noise level might be.

After that, it is about miltiary hardware, radar and weapons, at which point the more you cut the less useful they are.

The bits BAE is really only interested in, which is not the hull build bit. That just a nuisance to them, but they have to go through that to get the really expensive bits. The design process is expensive too. Could the really expensive bits be outsourced to cheaper better Countries to make a real saving, rather than the cheaper bit (hull). I am being provocative, of course, but it is true. Design could be outsourced too. In fact, why can I not get cheaper car insurance from abroad or solicitors and lawyers from abroad who have studied UK law,… Read more »

No offence to the Scottish shipyards, but what about the shipyards around the Uk that had to close so that Scotland got the New ship contracts, so why not the Tyne, or Belfast or Pompey, Plymouth – British ships from British Shipyards and not just the ones in Scotland especially when it’s leader is trying to leave the Union again

Any names for them yet. Let’s have suggestions….

No chance they’ll put some effective offensive weaponry on these ships,little point in building them.