Positioned at the northern side of the Mediterranean strait between Europe and Africa is the British territory of Gibraltar.

Spanning 4.2 square miles and bordering the Spanish region of La Linea, Gibraltar is home to over 33,000 residents and around 1,200 military personnel accompanied by 160 plus Barbary Macaque apes (or tailless monkeys).

Gibraltar has been formally recognised as being in British hands since the 1713 Treaty of Utrect where Spain ceded the territory was to be in British control forever. But, both history and recent events has proved there has, and still remains, a contention over its sovereignty.

Examples of this range from one of the longest sieges ever recorded which took place between 1779 and 1782 where the outnumbered British garrison on the Rock withstood prolonged enemy fire, with the Royal Navy running enormous risk to break the enemy blockade to provide much-needed support. More recently in 2005 the Security Services released records, which were subsequently published by the National Archives, detailing how Spain, despite adopting a neutral stance during the Second World War, actively aided Nazi Germany in intelligence activities against the British held territory by aiding attempted espionage and sabotage operations.

Fortunately, many operations of such nature were overcome by the British intelligence services with the utilisation of its highly effective ‘double cross’ system to turn foreign agents for the use of Britain, rather than against.

But the question remains as to why Britain, despite the complication of politics and the time, cost and effort it takes to deploy and station military assets and personnel, values Gibraltar highly enough to withstand the continued scrutiny and contention of Spain and other nations whom side with the Spanish over the issue of its sovereignty? One answer is Gibraltar’s strategic importance.

Gibraltar is positioned where the Mediterranean Sea and Atlantic Ocean joins which, at its narrowest point, is only 8.9 miles wide, resulting in close geographical proximity between Europe and Africa.

The result of which has enabled Britain, for over 300 years since the Treaty of Utrect, to initially establish and subsequently ensure safe passage for trade ships which continues today with Britain playing a key role in safeguarding bulk cargo carriers, oil & gas tankers and commercial vessels; thereby helping to safeguard the economic interests of our nation and of our allies.

The obvious military advantage of Gibraltar is that its geographic position enables pooling of resources for quick deployment throughout the Mediterranean which can be achieved by either air or sea with its dedicated naval port and air base. But another, and often overlooked, reason which simply cannot be ignored is the ability to gather intelligence which the Rock of Gibraltar brings.

Standing over 30 meters taller than the highest point of the Empire State Building the Rock historically enabled a visual long range vantage point into Spain, the Mediterranean Sea and Morocco that could be used to spot enemy movements which Britain could take the necessary pre-emptive measures against. This is still the case today, but rather than only a visual vantage; the rise of technology coupled with the height of the Rock enables an audible vantage where the military are able to both transmit and receive communications over great distances.

This is aided by the Rock itself being a natural structure made of limestone; meaning it is completely maintenance free, with exception to pathways and roads, and is soft enough to create a tunnelling system as was constructed during both the 18th century Siege and the Second World War, yet is strong enough to maintain safe footing and load-bearing’s.

The string of events occurring between the 18th century and leading through to the current day has demonstrated time upon time again that the sovereign territory of Gibraltar has both a military and economic strategic importance. However, these events, as important and well-documented as they are, seem outshone by Gibraltar’s cultural importance as a symbol of national resilience and strength. Gibraltar has remained staunch in its defiance to the numerous overt and covert attacks over the last 300 plus years which has nurtured a culture of dedication and loyalty amongst the locals. This was exemplified in the 2002 referendum where they were asked whether Britain and Spain should share sovereignty – resulting in 98% of Gibratarians saying it should remain British.

So despite seeming a small parcel of land, Gibraltar through its fascinating history and great strategic importance stands strong, tall and proud of its position as a much-valued British territory, which shows no sign of changing any time soon.

…if only the politicians recognised its importance.

When british speak about Gibraltar always forget to say that the origen of the conflict was that it was conquered on1704 during PEACE time by an anglodutch army reason why it is considered a piracy act. (Nothing new for the english)
If this ‘little datail’ never happened Gibraltar would never be on the Utrec Treaty.

Come back when you have repaid the ‘gold loan’ from South America, love a hypocite

You are hearing bells but you don´t know where. You could start by returning the Phartenon friezes you stole from Greece. Easy task and a good neighborly, or better almost ex-neighbor, gesture. 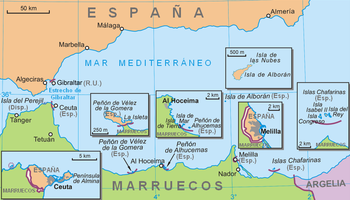 And the 5 enclaves in North Africa;)

Spain Have apart of the five enclaves ‘in Africa soil they have all the little Ireland which are called Cannery Ireland and in Frances they have Andorra Territory and also in Portugal they have the Territory called Olivenza and also elsewhere and also to finish don’t forget about South America and it go’s on and on.

i thought the apes were the british.
or the llanitos.
or both

We the British might be an Apes Bur you Spanish are BULL .

pablo, that’s the kind of unintelligent comment that you’d expect a child to make. Talking of apes it’s a Shame your media doesn’t concentrate on all the corrupt politicians that your proud nation have – ignoring those already in prison as they wouldn’t have time to report on anything else!!

Go home Pirates and return the land that is not yours . One day we will wake up as a Nation and you will paid for everything . Remember Admiral Blas de Lezo and the Battle of Cartagena de Indias??

You mean you won one?

Easy, but you must know. The “Plazas de Soberanía” are Spanish towns long before the existence of Morocco Kingdom. This is not the case in Gibraltar. In fact, Ceuta and Melilla are not in the ONU 16 Non-Self-Governing Territories list. Draws the attention that, on the contrary, 10 of 16 territories are in the possession of the United Kingdom.

The Basques are a brave people, that and a bit of yellow fever, other than that your point?

Love being called Pirates! We were rather good at it, let’s face it

Yet no anti ship, anti air, anti anything. No deterrence to Spain, not even a decent patrol ship…

[…] But another, and often overlooked, reason which simply cannot be ignored is the ability to gather intelligence which the Rock of Gibraltar brings. We wrote more on the value of Gibraltar here. […]

Important as Gibraltar is, Britain leaves its naval defence to the great lads of the Gibraltar Squadron, which has two fibreglass launches armed with twin GPMGs. No aircraft or SAMs. This invites Spain, a country which doesn’t champion the underdog, to regularly sending warships and military aircraft into British Gibraltar Territorial Waters in order to try and intimidate Gibraltarians into surrendering to its bullying. The UK press often reports Russian military aircraft flying close to its airspace, but incursions do not usually occur. So imagine the psychological impact if UK residents were able to see Russian warships or aircraft from… Read more »

Shut up scum, Britain is powerful Spain is a shithole. Ask the the thousands of Spanish who work in Gibraltar and have to cross daily… Britain isn’t a little child like Spain, no wonder Spain has no respect or power in the world.

[…] value of the territory was explored by one of our writers in ‘We Will Rock You – The Resilience and Importance of Gibraltar‘, this article discusses why Britain, despite the complication of politics and the time, […]

[…] value of Gibraltar was recently explored by one of our writers in ‘We Will Rock You – The Resilience and Importance of Gibraltar‘, which discusses why Britain, despite the complication of politics and the time, takes the […]

[…] value of Gibraltar was recently explored by one of our writers in ‘We Will Rock You – The Resilience and Importance of Gibraltar‘, which discusses why Britain, despite the complication of politics and the time, takes the […]

Wow! Didn’t know this about Britain